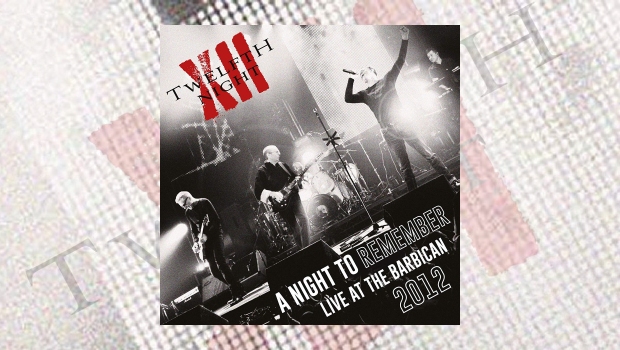 Twelfth Night – A Night to Remember: Live at The Barbican 2012

Twelfth Night are truly a force unto themselves.

What other band would have a 32-year gap between their last studio album in 1986 and the release of the stunning Sequences in 2018, and somehow manage to produce one of the best progressive rock albums of the year?

Similarly, seven years after their 2012 ‘final’ gig at the prestigious Barbican Theatre in London they finally get round to putting out a live release in 2019… and despite the lengthy gestation period, Twelfth Night have given birth to a magnificently stunning live album which must rank as one of the best of the year. For the uninitiated, Twelfth Night were one of the leading exponents of the British new wave of the Progressive Rock of early 1980s, alongside such bands as Marillion, IQ and Pendragon, but for various reasons they did not break through or achieve the same sustained longevity of those other artists. Some would argue they were actually the best of that generation at that time, and based on the stellar material showcased on this live album it’s hard to disagree.

The concert focuses almost entirely on songs from the earlier part of their career up to the departure of legendary (and now sadly deceased) frontman Geoff Mann in 1983, including every track from their best album, Fact and Fiction from 1982. In the interesting documentary that accompanies the BluRay version, Clive Mitten explains that they wanted to concentrate on earlier material as it was easier to produce live on stage with a 5-piece band. The later material associated with replacement vocalist Andy Sears, especially from their 1986 XII album would, require a larger band for more instrumentation, click tracks and  backing tapes, etc. (That era is already well documented on the excellent 2010 live release MMX with Andy Sears in great vocal form.) As drummer Brian Devoil also points out, they played the earlier material a great deal live, including their instrumental era which is well represented on this album, and it would thus be easier for them to play such material. It also has to be said that Mark Spencer’s voice much more resembles Geoff Mann’s, so he is well suited to singing Geoff’s wonderful lyrics.

Fans who know the band do not really need an in-depth analysis of each track by this excellent band as they will know them all so well. Curious listeners unfamiliar with Twelfth Night would find this album to be an excellent introduction to a band that truly could, and indeed should, have been Great. Once hearing this material in a live and brilliantly performed context it would not be surprising at all if new listeners start working their way back through Twelfth Night’s catalogue (I would DEFINITELY recommend commencing with the rather splendid 2018 3CD remastered re-release of Fact and Fiction.)

A Night to Remember kicks off in spectacular fashion with the skyscraping and massive The Ceiling Speaks, an explosive opener to the set, exactly as it was designed, as revealed by Clive Mitten. Andy Revell looks effortlessly cool on electric guitar, rippling off heroic riffs with aplomb. Mitten thunders along fluidly on bass and Brian Devoil drives it all along with great power and precision on drums. The Ceiling Speaks is a challenging song vocally and this must have been quite a concern for Mark Spencer, who it was revealed was unwell and suffering laryngitis, having virtually lost his speaking voice. Well, from the outset it is clear that adrenalin and vocal skill ensure that he sings this spectacular song (and all the others) powerfully and passionately. It’s quite an opening song.

Human Being from Fact and Fiction features Dean Baker (of Galahad) on grand piano under-pinning a floating guitar line, and in a nice touch the eccentric opening ‘tremulously quivering’ vocal from the album, featuring Geoff Mann’s voice, is played as the intro. Nevertheless, Spencer pulls off the main vocal perfectly as the song progresses, borne along by Mitten’s funky bass.

Two studio interlude pieces from their seminal (and farewell to Geoff Mann) 1983 live album Live and Let Live bookend This City. The End of the Endless Majority showcases Mitten’s versatility as a musician as he delicately plays acoustic guitar, combining beautifully with Revell on electric guitar. This City, a restrained and melancholic observation on urban deprivation featuring brittle, crystalline vocals from Spencer, is concluded with a wall of portentous keyboards on World Without End, in which Spencer and Mitten play additional synths and Devoil skilfully uses the cymbals as the piece draws to an almost religious ending.

Twelfth Night’s origins as an instrumental band are showcased in four such tracks, including East to West and Für Helene from their classic early album Live at the Target in 1981. Clive Mitten wittily introduces East to West as from 1979/80 “before they invented vocalists… when we were an honest instrumental band”. There are sinister overtones in the atmospheric intro, like something is ‘slouching towards Bethlehem’, before Revell layers chiming riffs all over the piece. Mitten is very active on his instrument and moving around the stage, just clearly enjoying the experience of playing songs from so long ago. In truth, this song does sound a little dated now, but it is of its time and shows that Twelfth Night were a very good instrumental outfit. Für Helene has stood the test of time more effectively, marching in with a massive rippling beat and Revell’s echoing guitars.

The dramatic highlight of this release is the chilling Creepshow, from Fact and Fiction, in which Spencer appears on stage with a blood-stained lab coat, rubber gloves and reflective sunglasses, sinisterly intoning the opening in a voice filled with darkness and menace. Dean Baker helps paint the gothic picture with his keyboards. However, in truth, what makes this song stand out as a classic piece of epic storytelling are not particular individuals but the brilliant and diverse ensemble playing contributed by each band member. Revell’s spine chilling guitar effects fit perfectly with Mitten’s lithe bass playing. The dramatic focus is clearly upon Spencer as he acts out this bizarre piece of musical Grand Guignol, at one point seemingly scaring Baker as he takes off his sunglasses to reveal a white eye, with a simple contact lens effect. The warped and buckled Mirror speech towards the finale is delivered with appropriate menace and madness by Spencer via distorted speech effects. He takes off his glasses and rips open his coat to reveal ‘Inmate 43’ on his t-shirt and bellows out his rebellion, while Revell takes off with a rippling guitar solo of liberation, Devoil blasting away thunderously on drums. It’s an absolutely brilliant performance, whether heard on CD or seen on BluRay, leading to a rapturous standing ovation.

The outstanding quality of songs on Fact and Fiction is reinforced with a stunning rendition of We are Sane. Similar to Creepshow, this is a wonderfully epic piece of theatrical rock, with a hard political edge like much of Twelfth Night’s material. This song has just about everything, including Devoil mimicking a typewriter rhythm on his drums, standing up to play them robotically later and using tympani drums to underpin Revell’s shrill guitars. Once again the band combines perfectly to convey the imagery with great power, imagination and skill – quite rightly another standing ovation follows this classic.

After such drama, understandably there is rather an instrumental interlude, including the only piece originating after Mann’s departure, C.R.A.B from 1984 album Art and Illusion. Initially, this is a spotlight moment for Mitten as he walks into the crowd deftly playing his bass. By the end, bass, drums and guitars all click together very effectively before they segue into short and sweet The Poet Sniffs a Flower, which yet again features Mitten’s bass before Revell’s distinctive high guitar sounds bring it to a swift conclusion. It seems this has just been rather a ‘palate cleanser’ for possibly Twelfth Night’s finest hour, Sequences. Somewhat remarkably this piece started out as simply a string of instrumental themes and it was only later that Geoff Mann showed incredible imagination and skill to write lyrics detailing the experiences of a World War One British soldier, perfectly fitted to the underlying musical themes. Spencer arrives in a khaki combat jacket and masters the characterisation of the ‘Sergeant Major’ over Revell’s bubbling guitar. Sequences has moments of pre-dawn fear, the absolute terror of going ‘over the top’ and heart-breaking realisation about the futility of war. These are all conveyed once again with consummate skills by the band, including the multi-talented Mitten on acoustic guitar. The highlight of this truly epic song and perhaps of the whole evening is the breathtaking electric guitar solo which Andy Revell sprays out like a machine gun around the auditorium, contorting his seemingly possessed instrument with stellar skill in portraying the utter ‘Madness’ (as he screams with Spencer at one point) of war. Of course, Devoil, Mitten and Baker illustrate this outstanding musical theatre in apocalyptic form, but at this point in the gig it is Revell who is stratospheric. Spencer’s emotional vocals do justice to Mann’s emotive lyrics in an elegiac finale and inevitably there is another standing ovation. Truly outstanding.

With such an enormous and impactful climax to the show the encores have to go in another direction and the catchy Fact and Fiction sounds remarkably like the opening to U2’s I Will Follow, and the band have great fun with Mitten, Revell and Spencer, also on guitar, walking around in the crowd in celebratory mood. Roy Keyworth, of Galahad at the time of this gig and who played with Twelfth Night during their ‘Reunion’ phase about 10 years ago, joins them for a rumbustious version of East of Eden. However, the gig has to end on only one song, the beautiful Love Song, which Revell introduces as “our song for Geoff”. Baker on grand piano underpins Mitten on acoustic guitar whilst Spencer emotionally sings Mann’s lovely words, and the whole band joins in to finish on an elegiac note.  Spencer calls out “Thank you. It’s been a hell of ride!” He was so right. 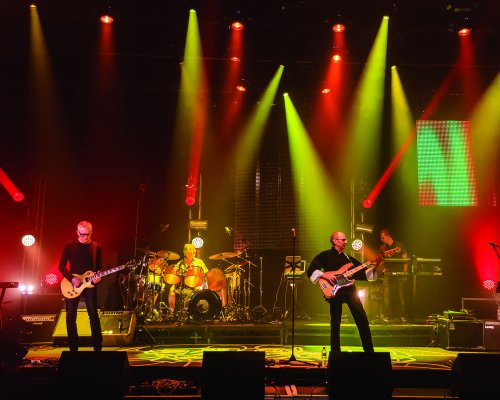 For those who choose to get the BluRay version, there is some interesting and fun extra material, including a half-hour documentary which interviews the band and those close to them with some fascinating insights. On a more fun note, there is also a section including some of Clive Mitten’s on stage ‘jokes’… one of which about Einstein, Newton and Pascal my science teacher wife agreed was very funny and clever! The high definition sound and visuals on the BluRay are top quality, capturing the musical performance perfectly. The lighting is spectacular at times, although the blue lighting in some sections washes out some of the visuals – but that’s a minor quibble. The extras are definitely worth getting, especially the documentary and the introductory film shown before the gig which imaginatively details their career – it is still sad to see pictures of the late Geoff Mann.

Whether as a BluRay or a double live album, A Night to Remember is an outstanding release, underlining what a great musical legacy and pedigree Twelfth Night left us, and also confirming that as a live act they were of very high quality. If A Night to Remember is their final ‘Swan Song’ then it really was ‘a hell of a ride’ indeed. It’s certainly worth getting if you’re already a fan, and very much worth investigating if you’re unfamiliar with them but love high-quality progressive rock filled with drama, epic stories, impactful ideas and emotion. Surprisingly re-emerging last year with the inspired ‘reimagining’ and expanded studio album Sequences 2018, and now releasing one of the best live albums of the year, there may well still be life in Twelfth Night yet…

After all: ‘If Music be the food of love… Play on.’ 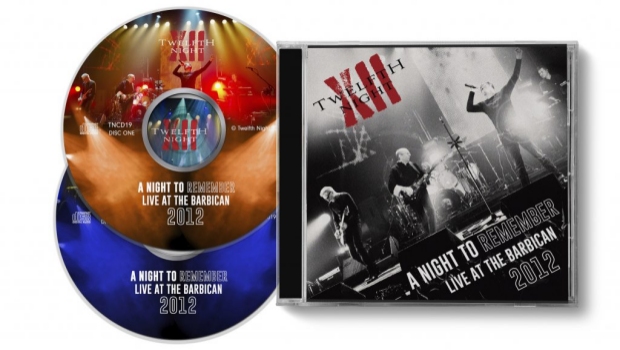 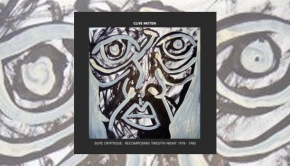 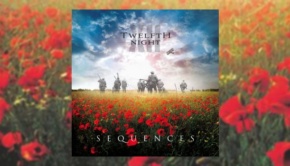