A lovely autumn day greeted us we stepped out of the ugly modernist functionality of Euston Station once more into the capital, so we decided to mosey on down to Regent’s Park to take in an outdoor exhibition of modern sculpture, and a cream tea. Aren’t we civilised?

Later we met up with a few good friends and a few new faces for a bite to eat at a pub within staggering distance of the venue. At 19:30 prompt(ish) we made our way to the charmingly named setting for tonight’s sonic adventures. Eventually, after a somewhat chaotic queue to get into the back room of The Water Rats, we find ourselves in a small but well laid out room, with a raised stage at the far end.

First up, a new band to me, The Display Team. Any group who have a song bemoaning the pitfalls of temptation that includes the payoff line “Foul temptress! Get undressed!” is alright by me. This motley troupe make a splendid racket akin to a RIO band playing ska music, employing deliciously complex syncopations in their arrangements. Intense and rhythmically beguilingly complex, the band are led by drummer/singer “Chuckles The Clown” whose jokey exterior masks songs of serious subject matter. Mr Chuckles doubles as “Keepsie” in the fabulous Lost Crowns, and it seems he and the increasingly ubiquitous “Joshing” have now been part of my two top gigs of the year, thus far.

In this band, the modest but very talented Josh mostly plays arpeggio staccato guitar, one of two six-stringers in the group. The icing on the cake is the two-man brass section, who lend a fun element to what could otherwise be some very furrowed brows, concentrating on the labyrinthine twists and turns of their songs. As they had prior knowledge they were not put off their stride by the entrance part-way through their set via the door to the dressing room that opened directly into the audience space stage right as we looked, and a mere yard or so in front of me, of none other than Tim Smith, plus carers. This was going to be a special night!

I quite enjoyed The Display Team, and wonder how they managed to slip under my radar. I will buy their last album when I’m done scribbling this, and so should you. 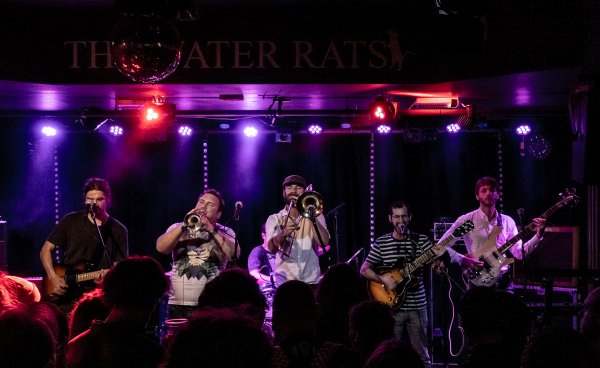 After a short break, the almost full venue filled up a bit more for Italian band Sterbus, whose new expansive double album Real Estate/Fake Inverno is something of a punk-pop-prog classic in the making. Long associated with the extended Cardiacs family, and with their latest offering including guest musicians adding layers of sophistication to Emanuele and Dominique’s songs, how would it fare in a live environment? Well, inevitably stripped back and with that electric live energy it is so difficult to reproduce in a studio, that’s how.

Emanuele told me afterwards that they struggled to hear themselves singing, which explained the occasionally wayward vocals, and the fact that Dominique’s fragile but glorious voice was sometimes swamped in the mix. With two support acts, it is inevitable that soundcheck times would be restricted, this kind of thing happens all the time. For all that the problems did not detract from an enjoyable set, taking in six highlights from that shiny new magnum opus.

With a solid rhythm held down by former Cardiacs skin basher Bob Leith, Sterbus’ pop rock bounced around like Tigger in the playhouse, and got the audience bopping along in tandem. Being Italian the band had an air of romanticism about them to counter the more direct no nonsense lyrical stylings of the other northern Europeans on the bill, topped off with Emanuele declaring his undying love for Dominique from the stage at one point, and why not indeed?

We still don’t know how many Sterbus’s (Sterbi?) it takes to change a lightbulb though… sorry, you’ll only get that if you were there! 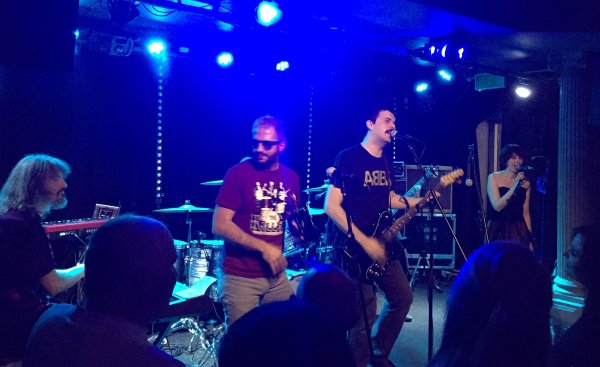 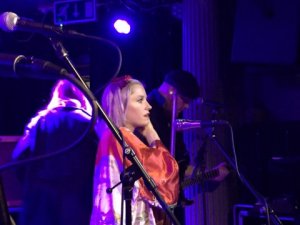 There passed another short displacement of time, during which the probably full venue filled up some more to near bursting (150?), the lights dimmed to an empty stage and a recorded anthem after which the diminutive Claudia Cox walked across to centre stage and played a looped violin intro before the rest of the band joined her under the spotlights, the difference in stature making the male contingent appear as mythical giants in comparison. From the point of view of the unique experience that followed, that is quite appropriate, as this band are now Nordic legend in my subsequently over-stimulated imagination! 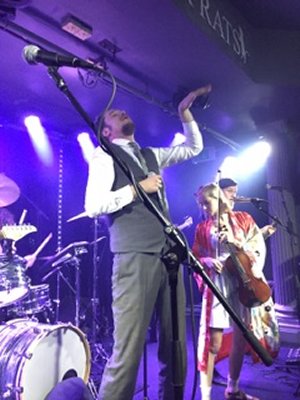 Notwithstanding the fugacious nature of Claudia to those in the audience under six feet tall, she and the rest of the band delivered a thunderous panoply of sound, mixed to perfection. We wonder at times where this band are coming from and where they are going, for this certainly is one unique trip. The be-suited frontman Jon Ivar Kollbotn, looking every inch the high-flying office worker on his lunch break soon gave the lie to that description, as his battle with St. Vitus leads me to conclude that here is a man who has stuff going on in his head us mere normals can only begin to comprehend. Somewhere between Ian Curtis and David Byrne, some splendid shapes were thrown by this most singular of frontmen.

Jon Ivar was nothing if not entertaining, and being such a strong focal point you have to remind yourself, particularly if you profess to being a half-formed journalist, to look at the rest of the band. Guitarist ØysteinBech-Eriksen, stage left as the audience looks, laid down some splendid work and has a liking for saluting the crowd with a raised pint glass. Between them, Jon Ivar and Øystein consumed a fair bit of juice during the set, but it had no detrimental effect on their performance. In Jon Ivar’s case it was probably all in the cause of building up Dutch courage for his venture into crowd surfing during the song 197, the pick of a few surreal interludes during the set.

The rhythm section was colossal, as it had to be to make an impression over the fulsome tuneage on display, a short summing up of which would be cleverly crafted pop prog melodies that often veered into synth-powered Scandi folk hoedown, led by Claudia’s violin. This gave added danceability to the songs taken from the last album Black Box.

There was one new tune on display, but it got swallowed up in the general shindig shenanigans. I will have to wait for the next album before I can say anything about it, sorry! 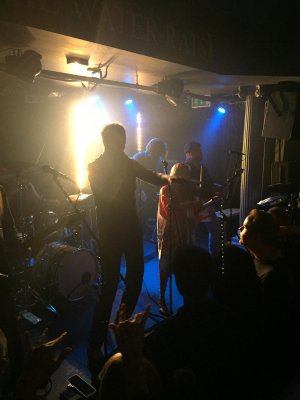 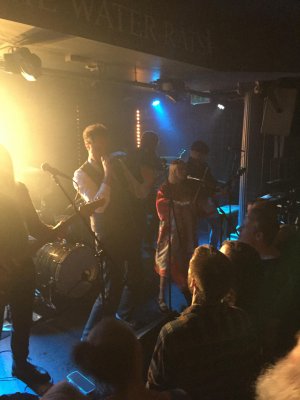 It seems us Brits are losing our famous reserve, if Jon Ivar’s comparison of us to his apparently quieter home crowd was anything to go by, although “sawing off my left foot” might be a tad rash, methinks! If you were there, you’ll get the reference! Suffice to say, if Major Parkinson can’t get your creaking limbs boppin’ then you’re probably dead. The rabble rousing mood was deliberately stilled by the main man, as he requested that the audience sat down during the sadly winsome Madeline Crumbles, and most of them did too. I thought better of it, as I might have taken the rest of the gig to stand back up again.

Euthanasia Rollercoaster was introduced as a “Brexit song”, written in a “Bed’n’Brexit”, if Øystein had any hand in it. As Major Parkinson hail from Norway, I’m not sure if they are as annoyed by the whole sorry nonsense as the vast majority of tonight’s audience seemed to be, or were celebrating the fact that we will imminently be joining the Land of the Fjords on the fringes, or heavens help us, even further adrift. If I do an interview with them I will be sure to ask!

After the gig, which left me feeling quite exhausted but sated (obvious comparison omitted!), my companion Phil W said “I don’t think I have ever experienced anything quite like that before”. This was meant in a good way, and he was not wrong. Major Parkinson are one those bands you MUST add to your bucket list, as their show really is something else. Their albums, while great, simply do not do them justice. Luckily the gig was filmed so hopefully most of it will appear online at some point, and you’ll understand what I attempt to convey.

Oh… and next time you visit these benighted shores Major P, book a bigger venue, you’ll fill it no problem! 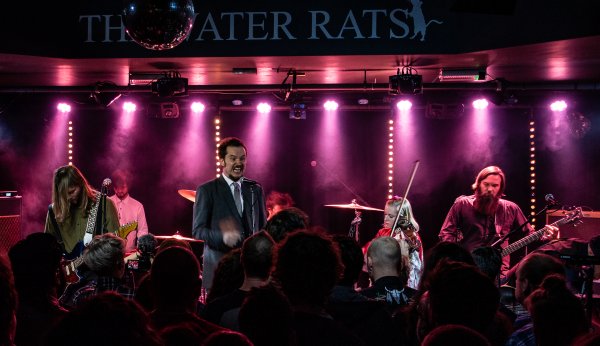 With many thanks to Ashley Jones, Chris Parkins and Spike Worsley for the use of their photos from the gig.