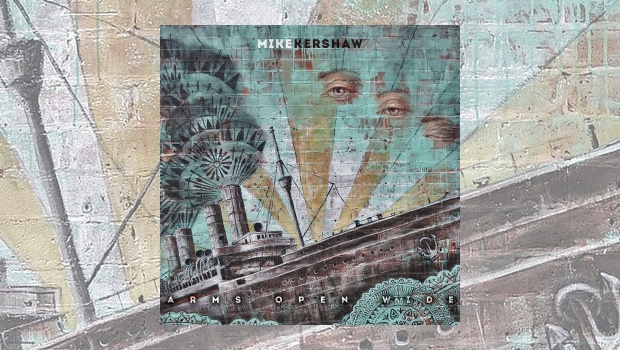 Mike Kershaw has released a notable album which resonates with the ‘interesting times’ in which we live. In a world beset with various political uncertainties and more general concerns about the future of our modern society it seems inevitable that some artists will reflect upon those issues through their music. In all honesty Mike Kershaw was previously an artist of whom I was aware but for some strange reason I had never really listened to his work, aside from an odd track on compilations or in podcasts. However, this album has rectified that situation in no uncertain terms, capturing my interest with the power of imaginative music and themes.

Arms Open Wide immediately grabs you by the proverbials (or even kicks you there!) with the remarkable linked four song cycle, known as The Fear Quartet. The first part, Fear Factory, opens ominously with a synth diving down into a dense and dark stream of pulsating rock with Gareth Cole’s sinister guitars swooping and strafing over a foreboding musical landscape, volcanically formed by Stefan Hepe (of Gandalf’s Fist), powerful but measured drumming alongside Leopold Blu-Sky’s equally skilful bass. This is barely controlled musical chaos, BUT it is controlled and imaginatively conveys an overwhelming sense of paranoia and fear, intoned over this portentous setting by Mike Kershaw’s growled and forbidding words. Midway through the song there appears to be some respite as Kershaw’s deceptively more gentle delivery outlines the empty solace found in the societal sedatives of TV and alcohol:

“You can drown your sorrows, it’s happy hour somewhere
But the TV screens are watching you, Just look they’re everywhere.
Try as you might to avert your eyes you can’t pull them away
Another round of drinks just doesn’t keep the paranoia at bay.”

It’s simply an outstanding opening song which fades away with presumably Kershaw’s young son, Owen, lamenting in the background “They’ve stolen the stars”. The piece then segues into the very atmospheric and largely instrumental Facing the Fear. Perhaps it is this evocative piece which highlights the way in which the music is written for this album; the main framework of the song is written by Kershaw who then gives Cole, Hepe and Blu-Sky the freedom to contribute to the pieces in their own ways to create the musical picture. Kershaw’s eerie keyboard sounds are joined by Cole’s subtle chiming guitars before the piece expands as a showcase for Blu-Sky’s deft bass playing and Hepe’s powerhouse drumming. The words are few and almost whispered as it is the music which so successfully conveys the images. Kershaw’s musical palette appears to be widening with this album and he has surrounded himself with a talented set of musicians.

Next is All That Matters is Fear, for which Kershaw managed to recruit Galahad vocalist Stuart Nicholson to add guest vocals, and he injects subtle menace to lyrics about control and militarisation in his own inimitable style. It’s also curious that Nicholson has released his own perspective on recent times with Seas of Change with his own band. The Fear Inside Me focuses on anxiety and depression in an angry way as the musical tempo increases with power to conclude an outstanding opening quartet of songs.

Kershaw has revealed the origins of this piece with the interesting point that the third song in the quartet, All that Matters is Fear, had originally been intended for his previous album What Lies Beneath (2016) but it was not included, which may have been fortuitous. Subsequently Leopold Blu-Sky (also of Garden of Live Flowers) suggested that they should write more music around that piece, which led Kershaw to devise the remarkable Fear Quartet for this album. In a strange coincidence Kershaw also reveals that he had previously intended releasing The Fear Quartet as an E.P…. and then (somewhat frustratingly for Kershaw!) Marillion then released their F.E.A.R. album, so obviously he had to change his plans. Clearly there is something in the air with progressive rock musicians independently but similarly touching on the political turbulence of our times. Progressive rock artists often seem to feel obliged to crank out an epic (the comedy catchphrase ‘Never Mind the Quality, Feel the Width’ comes to mind), but they so often descend into noodling indulgence. I am glad to say that this is certainly not true of The Fear Quartet. Their origins and the outstanding results point to a focus on meaningful song writing, which then evolved naturally in to a fascinating and poetic song cycle.

Somewhat wisely Kershaw follows that opening salvo with the much more up tempo I Wish Your Eyes were Mine, the optimistic lyrics, chiming keyboards and jangling guitars feeling like sunlight breaking through clouds after the storm of The Fear Quartet. It is perhaps inevitable that the second half of this album does not have quite the same impact as the opening section, but the generally lighter feel of some of the later songs acts as a healthy counter balance. Keys to the Kingdom is particularly positive and is the first song Kershaw has recorded with lyrics written by another artist, Fractal Mirror drummer Frank Urbaniak, apparently intended for another project involving Kershaw which did not reach fruition. Particularly in this song, Mike Kershaw’s distinctive vocal style is evocative of Dave Cousins of The Strawbs. His voice which may not be to everyone’s taste (if you’re looking for smooth or ‘rock’ vocals?) but it is a voice full of feeling and authenticity, and it perfectly fits the feel of the music, especially in The Fear Quartet.

Dark Spaces returns the album to a darker place in a jolly little ditty about someone who has lost all their family and wants to be free of grief – how those winter nights must fly by in the Kershaw household! However, that is NOT a criticism as it is in these darker spaces that conversely Kershaw seems to shine more. Blu-Sky and Hepe create a pulsing wave of sound punctuated with Kershaw’s keyboard effects. What is also notable is that amidst the despair Kershaw and his band manage to come up with engaging melodies and memorable tunes, with some fine acoustic guitar from Cole in the coda. Arms Wide Open ends with Curtains which has clear echoes of the opening song Fear Factory, with a feeling of resignation as we draw the curtains on the outside world. There’s an elegiac feel as Cole’s floating guitar beautifully soar over Blu-Sky’s languid bass, reminiscent of Marillion’s Steve Rothery. It’s a lovely, soulful ending to the album.

Arms Open Wide is an album well worth investigating, filled with interesting sounds and intriguing lyrics, all played with great touch and skill. Mike Kershaw is an interesting and distinctive voice, much needed in an increasingly homogenised musical world.