An early arrival into the capital heralded a day of chewing the fat with friends prior to the gig, and notwithstanding The Disappointment Curry, a fine time was had by all. Why did we do that? I have been to more gigs than I care to remember in the Camden area and you soon learn not to buy food from that tacky tourist trap known as Camden Market, where you will be royally ripped off for a portion of distinctly average fare. Which is, for some unfathomable reason, exactly what fellow TPA scribe Phil Lively and I did, daft sods that we are! Onward to the Earl of Camden hostelry where we met up with more like-minded souls, and suffered in the not at all silent surroundings of the packed pub as they all enjoyed what looked like proper food, at reasonable prices.

The band we are about to see have a fearsome reputation for volume, and so us ancient revellers did the only thing possible in such circumstances, and compared earplugs, before heading out of the pub into the oddly relative calm of the surrounding teeming streets to make our way to tonight’s venue. Rock’n’roll, eh? Phew!

The Black Heart is a deliberately underlit hostelry down a side street just off the main drag, and the gig was to take place in an upstairs room that held approximately 150. Sold out for weeks in advance, the packed audience, most of whom seemed to know one another, made loud conversation and a party atmosphere for this, the album launch gig for The Euphoric, The Fierce And The Dead’s “difficult” and pivotal third album.

The striking artwork to The Euphoric was supplied by DC Comics artist Mark Buckingham, a man who obviously knows his graphic design onions. Hitherto unknown to me, he also spins a surreal yarn to a song, under the guise of Jigsawman, and he was tonight’s support act, assisted by Chris Harrison on keyboards and Matt Stevens on guitar. Cutting a striking figure on stage, he wore an outfit that made him look like he had just walked off the set of The Prisoner, wearing a jacket festooned with a neat jigsaw design, in character. He also wore fairy lights and white gloves for maximum dramatic effect. This was his first ever public performance, so his initial nervousness and the occasional wayward vocal were understandable. Mark grew into his act, camping it up and showcasing three tunes from a forthcoming album and a possible single, which if tonight’s set is anything to go by, will be high on the quirkiness factor. This is of course, a good thing.

After a short change around and in anticipation of a mighty aural battering, I am now suitably protected with my professional musician’s earplugs, as compared and contrasted in the pub earlier, as on wander the four hardy souls of the headlining band to a thunderous reception. “Hello” says the grinning hirsute bass-wrangler Kev Feazey. “We are from Rushden, Northants, and we are The Fierce And The Dead”, and the band launch into the mighty rumble of Truck. Not since Higham Ferrers chip shop was bombed in the war has such a terrifying seismic tremor emanated from the Rushden area. Oblivious to impending sonic attack, the crowd do not give one, and a lot of frugging was going down. 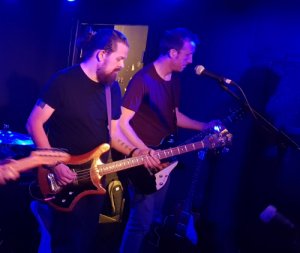 The tunes chase The Riff and nail it down with crushing power, alternating with math-rock tension building, fine-tuned over years of practice into something resembling an ancient rite. They do still practice the Olde Religion out in East Northants, it is said.

Some folk do not get math-rock, which is fine, although it did provide a comedy moment. Stood in front of me were a somewhat lubricated couple, who inevitably got looser as the night went on, particularly the bloke. The drunker he got, the more loudly he kept complaining to his other half how he wished the band wouldn’t keep stopping and starting as it was putting him off his dancing stride, or words to that effect, with much added expletives, inviting annoyed stares from the surrounding punters. At one point near the end, he said “Fuck it, we’re going”, as the lads on stage put another break on the riffage, and he dragged his partner away through the crowd. Then the riff started again… and he drags her back for more loose-limbed flailing about. “What a twat!”, says I as I smiled to myself.

The behemoth of music from The Fierce And The Dead barrels along like a lumbertruck, but I cannot help but feel it would be improved by the occasional vocal, even given occasional synth interjections that vary the instrumentation on tracks from the new album. However live, this is not a problem at all as sheer energy surging off the stage in waves of…err…euphoric electricity makes me forget anything else. 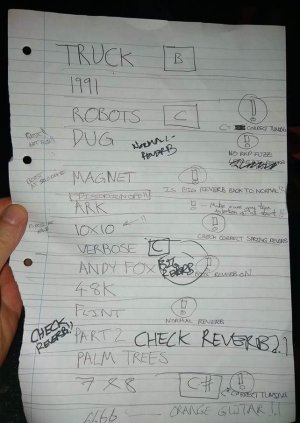 The tunes featured tonight from The Euphoric are all played with an obvious enthusiasm, my favourite being a particularly brutal rendering of Verbose. Matt Stevens occasionally shows his six string prowess with flights of fretboard fancy that leave me wishing for more. Steve Cleaton acts as the perfect foil for Matt’s excursions, keeping the melodies on track. The rhythm section is the sturdy beating of the cobbler’s last, and is impossible to resist or ignore. According to Kev, drummer Stuart Marshall apparently once complained that the towels provided backstage at a gig were “too coarse”, but a softie this wiry powerhouse certainly is not when sat behind his kit. During a gap between songs a punter shouts out “play one the drummer knows!” heheh.. the old ones are the best.

A splendid moment among many was when the band suspended a song mid-riff, eyes right on Matt as he guzzled a full albeit small (what is it about these craft beer cans being so tiny?) beer can in less than 20 seconds, only for the bear with a guitar to kick the thing off on the one, without skipping a beat. Marvellous! You can tell these four have a musical intuition of the kind that only years of playing together can hone.

As much a social knees-up as a gig, this was a splendid day, topped off by a fine rabble-rousing performance from Rushden’s finest. One hopes this is the start of something, and we here at TPA Towers wish The Fierce And The Dead all the best for the next phase of their sonic explorations.

[With thanks to Rosamund Tomlins for the use of her photos.]
[You can read Phil Lively’s review of The Euphoric for TPA HERE, and Roger Trenwith’s interview with Matt Stevens and Kev Feazey can be found HERE.]