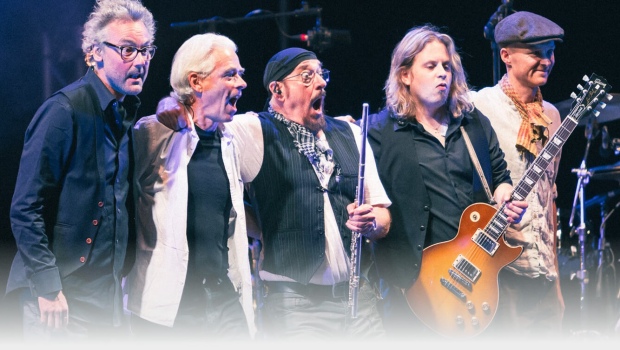 “This is a celebration of all the 33 band members who graced our ranks – musicians who brought their talents, skills and styles to bear on the performances live and in the studio.” – Ian Anderson

Like many, I suppose, a celebration of 50 years in music can be a double edged broadsword ;0)…, with a desire to applaud such an accomplishment on the one hand, or perhaps swayed by opinions, to leave yourself with fond memories of a band in their prime. Initially I chose the latter, however a last minute opportunity to go and see Jethro Tull one more time proved too good an opportunity to miss. So once again up the A19 to the splendiferous Newcastle City Hall.

We arrived about fifteen minutes before the scheduled start time to be confronted by a queue stretching half way round the building! Had we slipped into an alternate universe, only to emerge in the early ’70s, when such queuing was “fashionable”? A glance at the waiting masses quickly dispelled such notions as the long hair had been replaced by little or no hair and the t-shirts with warmer designer jackets, more suited to an early English spring climate. The snake quickly disappeared and we were duly seated a few minutes before the show started. Enough time to see the impressive projection screen and ponder what delights may be in store. 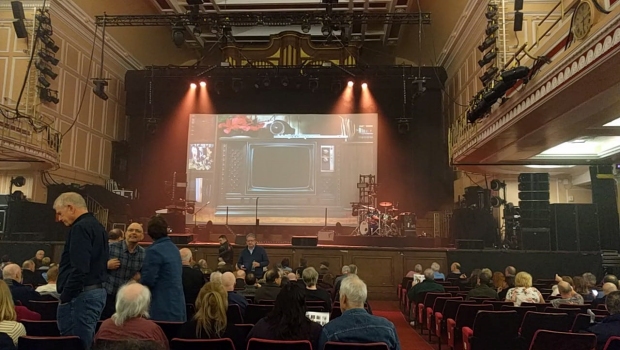 A prompt 7:30 start with David Goodier’s bass taking the opening bars, the band launched into an energetic version of My Sunday Feeling, suitably beefed up by Florian Ophale and serving as a precursor to a first set dominated by the band’s earliest recordings. In fact This Was featured heavily with four tracks taken from the album.

The back projection was used two fold, firstly to feature footage of the band, culled from across the decades and performing the same track, and secondly to have past members and various guests introduce the tracks. Mick Abrahams was an obvious choice for This Was, declaring said album as Tull’s definitive release. Jeffrey Hammond was another obvious choice for A Song For Jeffrey. Other introductions on the evening came from Tony Iommi, Joe Bonamassa, Steve Harris, Joe Elliott and Slash.

Between the numbers Anderson, as ever, was on top form, introducing the introductions and engaging the audience with his humorous anecdotes. For Dharma For One, which originally featured Clive Bunker’s rather elongated drum solos, Anderson proclaimed that unlike previous solos which “sometimes went on for days”, this evening’s version would not. Needless to say an abridged solo was performed by Scott Hammond. We move on a year to 1969, two regular live tracks in A New Day Yesterday and Bourrée, both re-arranged, as is the Tull way, but still retaining all their magic. Mr Anderson’s flute work was exemplary.

1970’s Benefit was represented by With You There To Help Me which segued into the second of Tull’s singles performed on the evening, The Witch’s Promise, before moving on. I really should delve back into Tull’s earlier catalogue as certainly the tracks played thus far remind me that there’s some cracking material there. However, as the lights highlighted John O’Hara we did move into more familiar territory for me, firstly with My God followed by another Tull live regular, Cross-Eyed Mary. 1971 had arrived and so had Aqualung. 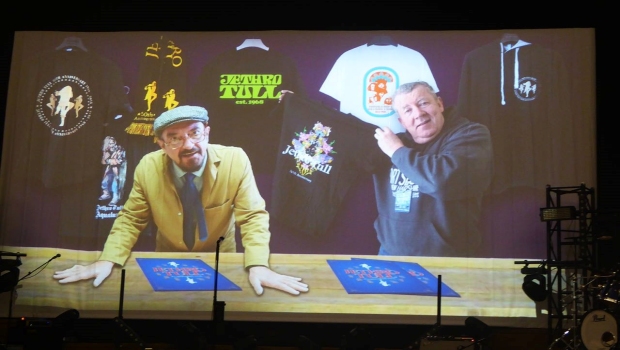 Time for a quick “comfort break” and a swift fizzy water? On his return from the former, my friend commented it was a sign of the times when the queue for the toilets was far greater than that for the bar. So no beverages were purchased by us on the evening. The other topic of conversation centred around the fact we were celebrating 50 years of Jethro Tull and at half time we had hit 1971! It’s gonna be a looooooong second set.

Jesting aside the second set moved up several gears for me, now whether or not that’s because the material was more familiar it is difficult to say, however the energy levels from both band and audience certainly seemed ramped up. Thick As A Brick got things off to a rollicking start and it was all up hill from there. I’m always amazed with Tull’s re-arrangements and the continual ability to breathe new life into their older material. Never a band to simply play the material as close to the record as possible, rather each performance is refreshingly different.

Okay! Lets touch on Ian Anderson’s voice. Granted he is no longer able to deliver the vocals in the same fashion, but with David Goodier and John O’Hara offering strong support it certainly helped. Let’s also consider that Jethro Tull’s music is maybe 75% instrumental and Ian Anderson a superb flautist, musician and consummate showman; so not quite the same as a singer who can no longer sing. You may disagree and that’s fine, I just find it a little sad that so much emphasis is placed upon what is a ‘part’ of the overall performance. It goes without saying, however, that Ian Anderson’s flute work was exemplary across the evening, something he constantly reminded us of as he moved across the stage in his distinct and characteristically nimble fashion.

The back projection was delightful during A Passion Play and as the second set continued, played an ever increasing part in the show. The wonderful addition of Anna Pheobe (I believe) on violin and vocals during Heavy Horses was inspirational and certainly the evening’s version of Aqualung ranks near to, if not at the top of the live performances I’ve witnessed. The synchronisation on the back projection definitely came into its own during these tracks and the ‘virtual guests’ were absolutely spot on.

The band returned for just one encore and the tried and trusted Locomotive Breath, no giant balloon this time around, but a rousing conclusion to a thoroughly enjoyable evening. So was it the right decision to go one more time? Absolutely, and an opinion, I feel, shared by the vast majority of 2,000+ fans who filled the City Hall that evening…

That just leaves the mad dash to the NCP car park to join the departing snake, eagerly waiting to pay for what, in the space of a couple of hours, has amounted to a figure akin to the national debt of Greece ;O)…

[No photos of the actual show I’m afraid, as in time honoured City Hall fashion, this sort of thing is rigorously stamped upon. So, pre-gig photo by John Spink and the interval image by Steve (The Progmeister) Petch…]

Second Set
Thick As A Brick
A Passion Play
Too Old To Rock ‘n’ Roll, Too Young To Die
Songs From The Wood
Ring Out, Solstice Bells
Heavy Horses
Farm On The Freeway
Aqualung

*The set list is “to best of my memory”?