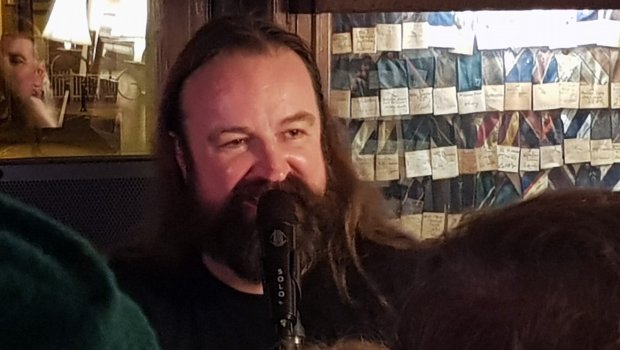 What a fabulous evening.

A week ago Damian Wilson was singing and body surfing to an audience of 3,000 people in Tilburg as part of The Ayreon Universe series of concerts. On this wet Wednesday night he finds himself at The Bear in Alfred Street, built in 1242 and known as Oxford’s smallest pub – capacity circa 25.

That hasn’t stopped people travelling from near and far to be here this evening and hear him play. Nor does the change in venue seem to disconcert him in any way. During set up and sound check it is clear he feels relaxed and on first name terms with most of the intimate crowd, regaling them with stories and generally chatting freely with whom ever comes through the door. He is a man having fun and evidently enjoying himself. 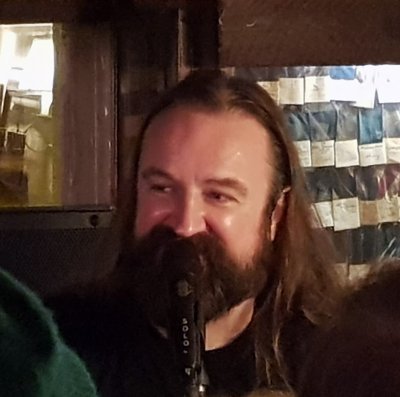 Around 8.30pm he casually saunters over to the microphone, lifts his guitar and without warning or announcement, begins to play. Within the first few chords he immediately exudes a natural confidence and enthralling presence which effortlessly captivates everyone present as an enchanted hush descends on the pub. The meticulous attention to small details during set up pays ample dividends with sound that is crystal clear, perfectly balanced and enjoyably punchy.

By the time we get to the stunning rendition of Written In Anger, there is little doubt that Wilson is simply exceptional in terms of the range, tone, intensity and sheer compelling authority his voice commands. He seamlessly blends power and nuance, anger and compassion, conviction and subtlety, love and sorrow. It is nothing less than a vocal master class and one which is, frankly, an absolute privilege to hear.

In between songs he proves himself equally adept as a wry and mischievous storyteller, holding court with great humour, affection and genuine humanity in the insights and experiences he offers. More often than not, these are interspersed with witty observations and interactions with members of the audience, who in turn offer their own humour and stories in response. Such narratives feel as if they are a natural extension to the songs he sings, organic threads which help set them in context and give them meaning and perspective.

As he sings, it is noticeable that he establishes eye contact with members of the audience and sings as if directly to them. I suspect that is exactly what he is doing. There is a passion and a fire in his eyes, what seems like an almost overwhelming urge to communicate the soul of the song to those on whom his gaze is fixed.

If you are familiar with the lyrics to a lot of his songs, you can understand why. These are themselves stories which speak of deep, persuasive experiences, of trying times, of pain and suffering collected along the way – fragments, episodes that have been distilled and captured in song. They speak and he speaks to you in the songs he writes and in the way he sings: dynamic, poignant and full of life.

The evening ends with a glorious cover of Iron Maiden’s The Evil That Men Do which sees us all singing along in a state of happy abandon. Good natured, good fun, it was a wonderful few hours in the company of a supremely gifted musician who gave us a heart warming taste of irresistible music, amusing tales and a spirited sense of just how music has the power to bind us together. 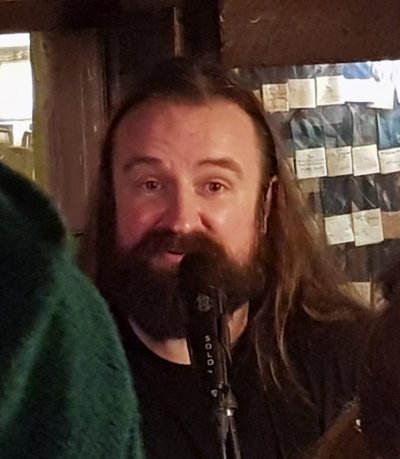 TRACK LISTING
Sorry; didn’t keep notes. I don’t think he did either!