I don’t know what it is but 2017 has been a veritable desert of gigs for me, rather than the usual dessert. It might be age related apathy, or the arse ache that is having to travel for hours from home to attend anything remotely interesting, but we’re almost half way through the year and it’s only my second gig of 2017…

However, I’ve been really looking forward to this one for quite some time, the magnificent Mew from Denmark. So off to Bristol, and more arse ache as the M4 is closed resulting in a journey of almost three hours. Happy days. Finally in Bristle, the Trinity Centre is a very lovely venue in a converted church just outside the city centre, reminding me a little of Cardiff’s late, lamented The Point, except Trinity is bigger.

Immediately obvious, and as expected, the audience tonight is student-heavy and favouring the 20-somethings. There are some of the ‘older persuasion’ present but we’re in the minority and it’s quite refreshing to be out and having it moderately large with ‘Da Youth’. As always on such occasions I wonder why some of these people don’t turn up for more of the shows that I go to. Granted, Mew are quite a youthful and generally not bad looking bunch, but even they are now there or there abouts in their 40s. More proof that gig choices are generally made with the eyes rather than ears perhaps? 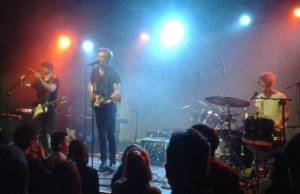 But first up is swaggering Belgian hipster Maarten Devoldere, also of rock band Balthazar, with his solo art-pop project Warhaus. I’d not come across Maarten before but with the title of Warhaus’ debut, We Fucked A Flame Into Being, a quote from D.H.Lawrence’s Lady Chatterley’s Lover, it is obvious that he isn’t afraid of straight talking or courting notoriety, the stripped down ‘noir’ sound of his band giving an almost sleazy, knowing feel. There’s decadence and a hint of Tom Waites bluesiness as the three-piece keep it real, playing over loops and samples to expand the sound as Maarten’s lip curling delivery cuts right through. The drummer keeps strangely off kilter rhythms with splashes of additional sounds from his electronic pads. Across the stage the guitarist unleashes shards of jagged chords, adding to the tonal palette with keyboard and melodica. I don’t know their names but they did well helping Maarten deliver his vision as he deploys guitar, bass loops and trumpet shrieks. The album is not bad, live it’s fascinating and I’m glad I was able to experience it.

So far, so not prog at all, but that really doesn’t matter as it isn’t what tonight is about. Mew play an interesting and absorbing range of sounds with melody in abundance, often soaring to the stratosphere, but they aren’t in any way a prog band. That said they frequently tickle my Prog Detector and are far more consistently exciting than most current bands. 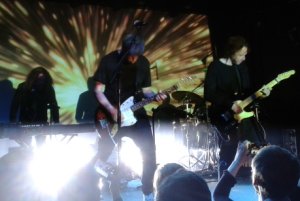 Now down to a trio (again) after the departure of guitarist Bo Maddsen, Mew are augmented by the more than capable Mads Wegner in that area, plus the ever present keyboard and vocal support from Nick Watts, now a live member of the band for 16 years. The sound, as with Warhaus, is loud but very clear, the acoustics of the building probably helping, as Mew kick off with In A Better Place and 85 Videos from new album Visuals, the accompanying images for the latter projected across the band and onto the backscreen to impressive effect. 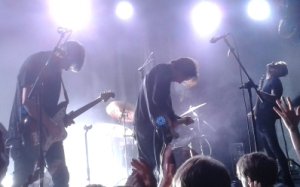 Special, from 2005’s classic And the Glass Handed Kites, appears earlier in the set than expected and with Wegner and bassist Johan Wohlert adding movement and energy, Jonas Bjerre centre stage is the epitome of calm, nailing his high register vocals beautifully over the pounding rhythms from Silas Utke Graae Jørgensen. Silas appears to be ‘The Quiet One’ but he makes up for it by beating seven shades out of his kit in unorthodox style. It often looks ungainly and isn’t the most dexterous thing you’ll ever see but the results speak for themselves. Following Special with The Zookeeper’s Boy, as on the album, is always going to work, but midway through and just before Bjerre’s skyscraping vocal section, there’s clearly a problem. Silas has stopped playing and the rest of the band join him as the song peters out. 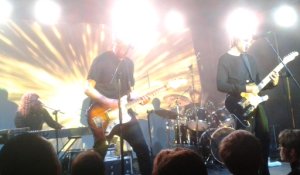 As technicians scurry about the band are left scratching their heads as to what to do. Eventually Jonas shyly relates a charming anecdote from a previous trip to Bristol wherein a pretty girl approaches him, he believes – with a hint of fear it seems – that his luck might be in. She’s smiling, he’s nervous but ultimately she only gives him a leaflet about Scientology. It seems that despite being a rock star (possibly a reluctant one) Jonas suffers like many of the rest of us! After this they’re running on empty and decide to retreat backstage. We’ve all seen bands that delight the crowd with an impromptu ‘whatever’ to keep the crowd entertained during such incidents, but it is the honest insecurity of Mew that helps to make them so appealing. It’s almost like they’re surprised that anyone has turned up and are easily rattled. As Johan tells us after the unexpected five minute break, “we’re not used to things going wrong!” Jonas says that he always wanted to be a stand up comic, but few are convinced! 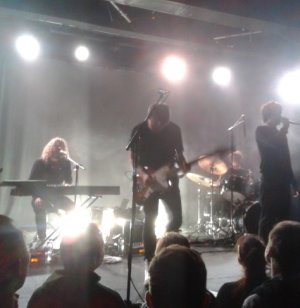 The crowd will forgive them just about anything so no harm done and it’s on with the show, the issue turns out to have been a monitoring problem, and next up is crowd favourite Satellites. The band are soon comfortable again and the rest of the set is a swoon of tracks from the new album, including a thumping Twist Quest, and songs from the previous three releases, the rhythmic frenzy of Introducing Palace Players the only selection from No More Stories…. Mads is on fine form and it turns out that today is his birthday. Jonas is almost embarrassed when asking the audience if they’d like to sing Happy Birthday to him. In fact he almost abandons the idea but the Mew faithful are more than happy to oblige, indeed those around me have been singing along with everything all evening. 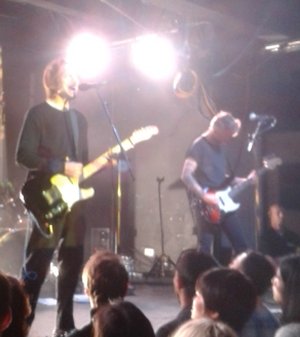 Johan is immense throughout, the massive bass pump cutting through it all. Jonas is just sublime, hitting unfeasible notes and contributing to delicious four-part harmonies with the help of Johan, Mads and Nick. Apocalypso is thundering and magnificent, culminating in a fantastic slide into Saviours of Jazz Ballet – and any band that can successfully utilise a title like that and turn it into a soaring mini-epic is more than worthy of your attention. 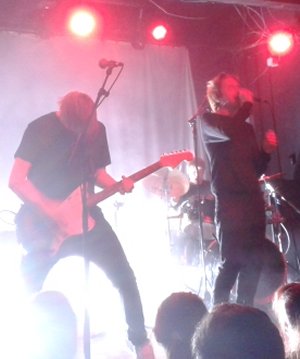 There is real variety in the songs chosen, showing the distance that Mew have travelled over the years. There’s rock excess, pop sensibility and jazzy weirdness, all held together beautifully by Jonas’ extraordinary voice. The main set ends appropriately with the closing number from Visuals, the epic qualities of Carry Me To Safety the perfect way to finish. 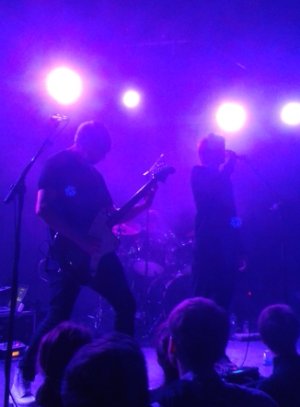 Mew leave to rapturous applause but are soon back for a quite wonderful encore that takes in the opening track from Visuals, Nothingness and No Regrets, followed by a trio of tracks from Mew’s 2003 breakout album, Frengers, all accompanied by some fantastic images on the screen. First off it’s back to back high energy crackers in Am I Wry? No and 156, Jonas strapping on a guitar to help fill out the sound. They leave again but only briefly as Mads returns to pick out the fragile opening of the ubiquitous closer to Mew shows everywhere, the majestic Comforting Sounds. Jonas joins him, his voice plaintive, the rest of the band gradually drifting back to the stage, finally Johan just in time for the song to kick off. If every gig ended like this I’d be a happy man, it’s a stunning thing of real beauty that builds and builds to a simply extraordinary crescendo, Jonas nailing the screamed accents in the finale. Simply superb. 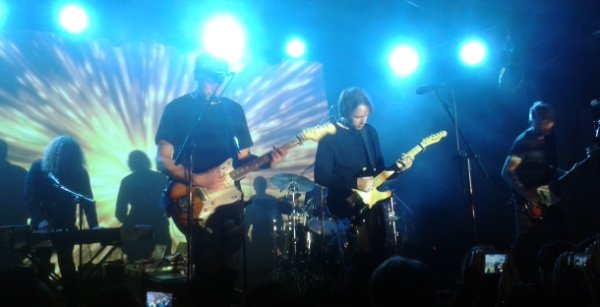 Mew are a very special band and their music touches the hearts of music fans across the genres. They don’t do pigeonholing, it’s all about writing and performing whatever they want in their own inimitable style. A complete pleasure and a privilege to be present.