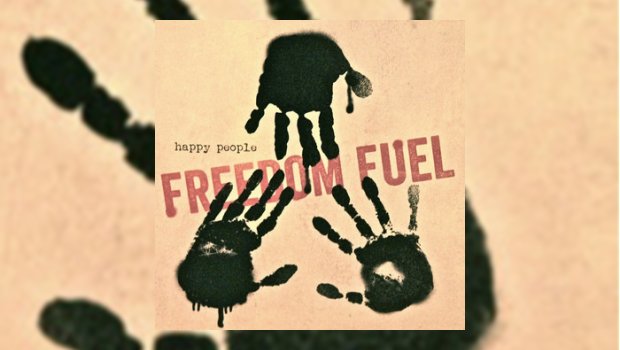 HERE’S how we roll at TPA – our editor offers up tasty morsels of all the new releases and we fall upon them like ravenous prog vultures, before deciding whether to scoff the entire meal.

On this occasion, he dangled a music video for Leave it Behind from newly-formed Finnish trio Freedom Fuel – a driving, bass-led slice of upbeat blues-rock with a guitar riff reminiscent of Daevid Allen circa Bananamoon, the whole thing drenched in ’60s reverb. There was real attention to the quality of the vocals and harmonies, and while the structure was simple the occasional left-wing chord was thrown in there to make sure we were all paying attention.

Brilliant, I thought, I’ll have some of that!

The danger of this approach, of course, is that nothing else on the album quite matches up and, with one significant exception, that’s the problem with Happy People.

First, some facts. Freedom Fuel are a three-piece of guitar, bass and drums from Helsinki, founded by musicians drawn from various bands operating in what their PR gumph calls the “Finnish underground”. No, I don’t think they’re train drivers. Their debut album shows clear influences from the likes of U.S. hard-rockers Audioslave and Velvet Revolver, while pulling in a bit of XTC and the aforementioned Divided Alien.

Leave It Behind is a great opener, with Teemu Holttinen’s guitar introducing proceedings with a jaunty riff. Dirt In The Ground is slower and grungier in a dramatic minor key, lifted by a middle-eight of descending Beatles-y chords and a lead break that’s unflashy but effective. Holttinen is not a show-off guitarist but one whose playing, while loud and dirty, always serves the song.

There are a few fast, furious, throwaway songs that did little for me, even with the repeated use of the word “motherfuckers”. By track five I was looking for something that changed the pace a bit and didn’t feel like the band were trying to perform brain surgery on me with a pneumatic drill.

Luckily, that’s when they turn in what to me is the highlight of Happy People, the 7:39 prog-length I Can’t Come (ooo-err, missus!). Bluesy, gutsy and epic, it starts with a shuffling drum beat, then a heavy bass joins in before guitar and vocals growl together. But there are interesting XTC-ish chord changes and vocals in the middle-eight, underpinned by gentle harmonies, then it’s back into the heavy stuff and a guitar solo that could have come from Allen’s work in Gong – all angular, unpredictable and discordant.

It is, for me, the track that justifies their inclusion on a prog website and is one of, say, four tracks on the album that show Freedom Fuel have got much more to offer than a blues-rock thrash.