Occasionally we need bands that slap us out of our complacency, that reset our expectations, that demonstrate that individuality is still an attainable trait. All Them Witches accomplish this effortlessly. Their sound is an organic melting pot that spans genres and eras, influences are discernible, but the result is unquestionably unique. Quite simply, I believe they’re one of the best American rock bands I’ve heard in a very long time.

This Nashville-based quartet has been busy over the past five years and their progress has been impressive. The leap in maturity between their debut stoner opus Our Mother Electricity (2012) and the heavy-blues-rock and psych epic Lightning At The Door (2013) demonstrated a band quickly developing their own identity. The cohesion they attained from constant touring came to fruition on the diverse Dying Surfer Meets His Maker (2015), recorded in a week in a converted cabin, the bare-bones approach amplifying the chemistry these four musicians have attained. For their latest the band elected to work with an outside producer for the first time, outlaw country veteran Dave Cobb. The resulting Sleeping Through The War is as expansive as Dying Surfer… was stripped-down, a glorious, groovy mindfuck and so far the highlight of the year.

Bulls opens the proceedings with a heavy-lidded spacerock groove, immediately engaging and hypnotic. The arrangement is layered and voiced beautifully, the dreamy female backing vocals cuddled up comfortably with the understated accompaniment. It’s essentially a vamp, a lush pad that vocalist Charles Michael Park Jr.’s relaxed, clear delivery floats along on. The chill-out vibe is only occasionally displaced by a wonderful, overdriven fuzz guitar riff, a hint of the brilliantly frenetic closing section to come. That finale is a beautiful layering of vintage synth, Mellotron and acidic guitar; a swirling, psych-rock hurricane of epic proportions.

Next up is a trio of concise, punchy single-length excursions that attain that effortless balance of keeping it forcefully unpretentious while simultaneously sounding expansive. Don’t Bring Me Coffee is a snarling, punky number that brings to mind a hypothetical ’90s jam session between Morphine and Nirvana. First single Bruce Lee is a driving sci-fi riff rocker, the perfect soundtrack for navigating your spaceship directly into a black hole, just for the sheer joy of seeing where it leads. The masterful 3-5-7 is next, taking the psychedelic elements introduced on the opening track and compressing them into a laser-focused 4-minute arrangement powered by crackling, fuzz-driven guitar and rhythmic wallop.

The dreamy, languid Am I Going Up? serves as our doorway into the more experimental, jam-based second half of Sleeping Through The War. It’s chill-out groove enhanced by some marvellously textured guitar and synth sounds, not solos in the traditional sense, more like abstract painting with tonal colors. The inventiveness of the mix becomes more evident as the album continues, it’s a stunning headphone album, elements drift back and forth across the stereo spectrum and envelop the listener. While the core sound of the band has not changed, producer Dave Cobb has given them an infinitely more spacious canvas to stretch out on.

The centrepiece of the album is the incredibly infectious Alabaster. It’s 7 minutes of transcendent funk groove peppered with percussion, guitar loops, gnarly Fender Rhodes and an occasional crushing guitar riff that brings to mind Queens Of The Stone Age. It’s bloody perfect.

The ferociously stoned Cowboy Kirk is a dark, southern-fried trip to the Led Zeppelin universe. Powered by a Bonham-inspired groove and some of the eastern tonalities of Kashmir it captures the spirit of mid-period Zeppelin more effectively than anything Page or Plant have recorded in the decades since. And despite the obvious influence, it never sounds “retro” for a second, never sounds like a simple homage, it’s wholly organic and utterly modern.

All Them Witches is a damn special band and they have crafted what is easily their most impressive album to date. It’s so beautifully unpretentious and natural, such a refreshing blast of unfettered inspiration, that in my humble opinion it’s an instant classic. 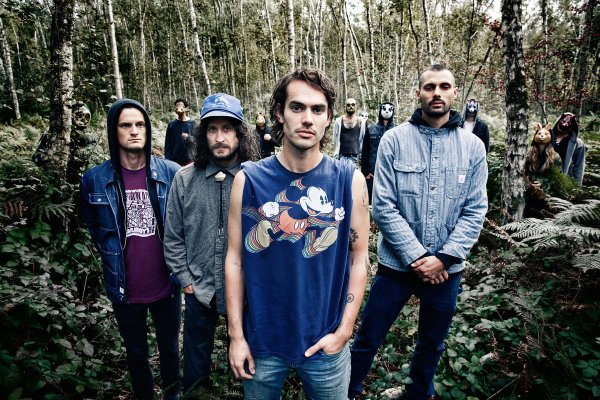