Magic Bus originated in Devon, playing rock music infused with a psychedelic spirit, mixing various influences including the Canterbury scene of the ’70s with the West Coast sound of Crosby, Stills & Nash, the whimsy of Traffic and even the grandeur of some progressive rock. Magic Bus are currently preparing a new album for release in 2017 after the interest in their impressive Transmission from Sogmore’s Garden two years ago. This was a gig in which to try out some of their new material on home turf. They played with support from talented Bath band, Ulysses, who entertained the crowd with some solid rock and some psychedelic touches of their own. 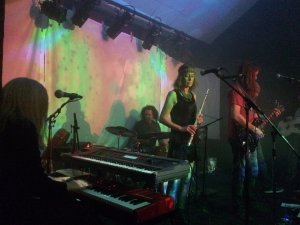 Paul Evans clearly indicated a major influence for his band by wearing a cool shirt bearing a picture of the psychedelically painted school bus Further, also known as ‘The Magic Bus’, in which renowned ’60s counter-culturalist and author of One Flew Over the Cuckoo’s Nest Ken Kesey and The Merry Pranksters commune took trips – of one kind or another! Evans has assembled his own musical Merry Pranksters, like-minded musicians to play the music they love and, on the evidence of this gig, they are becoming increasingly confident and assured in their performances.

Opening the set with the The Ballad of Sogmore immediately plunges the audience into whimsical psychedelic rock territory as Jay Darlington’s keyboard lines are echoed by the guitar of Terence Waldstadt. In a band of talented musicians it has to be said that the flute work of Viv Goodwin-Darke is a real highlight as her lovely playing flows through the songs like a sparkling stream.

Three Days follows with all it’s playful diversity, like a musical embodiment of Kesey’s Merry Pranksters. Magic Bus take us on this musical, mystical trip before the audience is taken Back to the Garden in all it’s sun filled optimism and C.S.N. style music. Sadly, we are deprived of Goodwin-Darke’s lovely harmony for this gig by a virus. Waldstadt’s fine guitar work compensates with his usual fluidity over the finale of this song. 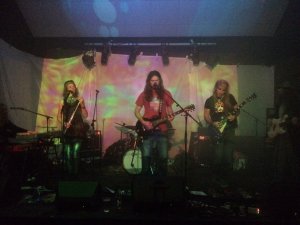 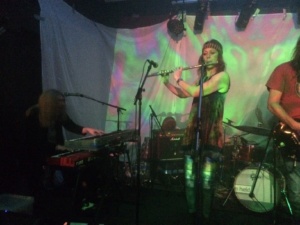 One of the main highlights of any Magic Bus gig is their space trip Jupiter 3 AM, a prog rock inflected mini-epic sci-fi tale of Martian Pioneers. Tonight the song really grooves along, instruments weaving under Goodwin Darke’s distinctive flute. Maybe it is because they have been formulating a new album or maybe it’s because they’re improving over time but tonight this song opens out more beautifully than ever with organ, bass, flute and drums all intertwining before gently settling back into the delicate flute refrain. This was only the preamble to a truly impressive flowering of sounds, powerfully driven along by impressive stand-in drummer Rick Byer and Will Mellors’ rocking bass line. The delightful finale had the whole band instinctively combining together into a celebratory climax. Long may this song continue as a centre piece of their set. 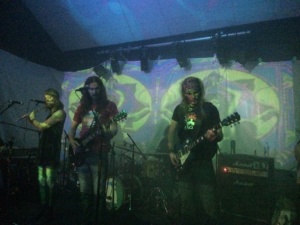 First of the new songs aired tonight is Mystical Mountain, followed by Zeta, which debuted at the recent Sea Change Festival, and Distant Future. Understandably, these embryonic songs were not as polished as some of their more familiar material, but they do indicate a promising new album with perhaps more of a leaning towards progressive rock – although this remains to be seen. The crowd gave them an encouraging reaction, which will hopefully help drive the band on to complete the new album as soon as possible.

As the gig proceeded towards the end Magic Bus went back in time to some old favourites from their self-titled debut album, including their joyful signature tune Magic Bus, with Jay Darlington (once of indie rockers Kula Shaker) particularly outstanding on keyboards. Darlington punctuated and illustrated the whole gig with an array of often Eastern influenced musical dashes and effects. Milky Way increased the psychedelic atmosphere before the far out finale of Tucan Pyramid, with Byers impressive on drums and Waldstadt and Darlington trading lead passages on keyboards and guitar. Throughout Paul Evans sung with his usual subtlety and feeling, at times like some sort of cosmic troubadour and others more in the vein of C.S.N. – whilst adding his delicate guitar skills to the more rock oriented style of Waldstadt. This enchanting gig ended with the bounce and sunny sounds of encore Sunflower, all played out against a trippy and the ever changing back projections of psychedelic shapes and colours.

If you want a gig of gentle charm, sweet sounds and fluid rock, full of beauty and music of an unashamedly retro nature then Magic Bus are a band you should definitely try to see. They are not a tribute band, churning out other bands hits – they play their own music which evokes vague but sweet memories of times and places gone by… or of places we can only venture to in our minds.

If the Magic Bus comes near to you I highly recommend jumping on board. 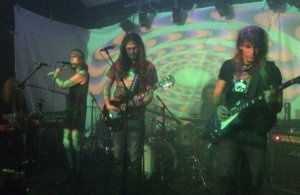 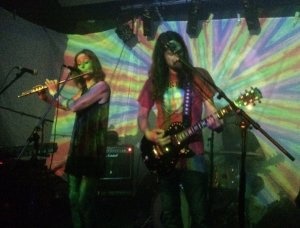