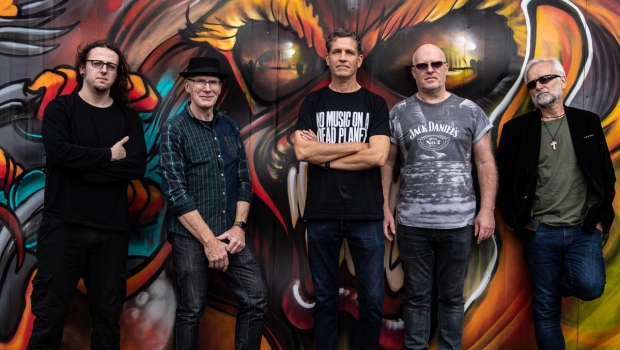 As many progressive rock followers know, sometimes the most memorable concerts take place well away from the arenas, theatres, festivals or large clubs these days. Up here in the North-East of England, prog or classic rock gigs can be few and far between over the course of a given year.

So, when the opportunity arose for me to attend an intimate two-set Stuckfish concert on their home patch amongst family, friends and long-standing fans of the talented melodic prog rock band in Northumberland – albeit up near the Scottish border in Berwick-upon-Tweed – it was one I couldn’t resist. As a result, I found myself driving up the A1 on an early autumnal evening in mid-September and braving the cold nip in the air from the North Sea, as I parked up and walked to The Radio Rooms in Tweedmouth.

The Radio Rooms is a lovely, grassroots venue and event space, created in March 2019 to provide a safe and inclusive space for events to benefit the local community and beyond, and to mainly provide a platform for new and up-and-coming artists in the area. Stepping through the doors, I found a cosy and friendly venue with a central stage across from which a selection of tables and chairs were arranged to comfortably seat around fifty people, whilst paintings, photographs, antiques and decorations were colourfully festooned around the walls.

Just time to get a drink from the bar, say a quick hello to some of the band, before a young and talented female singer-songwriter from Hawick, by the name of Devin Casson, gave a very enjoyable and fresh support session – displaying an endearing voice and some nifty guitar work too, over a range of musical styles. 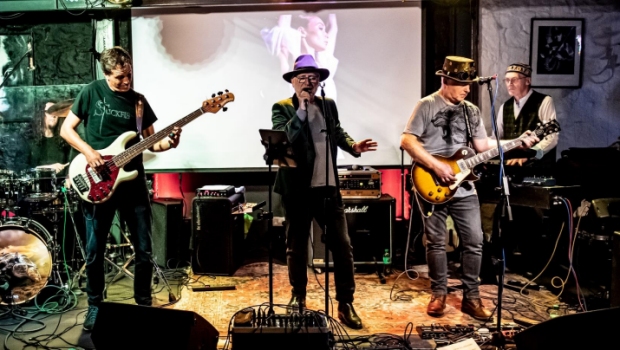 It wasn’t long before Stuckfish took to the stage to warm and expectant applause over an atmospherically dark video introduction on the screen behind them. Having built up a growing reputation on the indoor prog festival scene in recent years, I was keen to see how they would use an extended double set to showcase their three album repertoire.

They kicked off confidently, with the opening track from their 2018 debut album, Calling. A brooding, slow-burning and swaying slab of classic rock with Phil Stuckey’s dramatic and operatic vocals and expressive poetry flying over Ade Fisher’s evocative guitar riffs and a vibrant and solid rhythm supplied by Phil Morey on bass and young Adam Sayers on drums.

The ever popular The Bridge (That Spans the Edge of Time) from 2019’s The Watcher album followed – and despite being so early in the set, it managed to raise the hairs on the back of the neck considerably. This was the first track I ever heard from the band, and it still hits impressively to this day. Chiming, melodic guitar motifs, crystal-clear vocals and a subtle proggy wash of keyboard chords from Gary Holland mingled with the song’s stately tempo. Stuckfish have the knack of conveying great intensity and power without needing to gallop away and fill in every available musical space. They have the confidence to let songs like these breathe and reach an audience effectively. 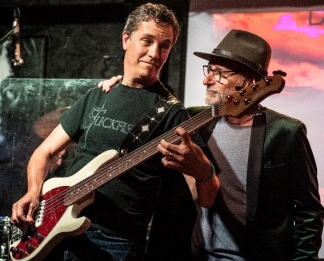 GameChanger is the first track tonight from the new album, Days of Innocence, and is unashamedly melodic and commercial. A defiant response to the pandemic years, Phil’s melodic bass playing is a joy to behold, and it drives this bouncy, upbeat and optimistic piece while Ade continues to show his ‘less is more’ guitar style with well-judged power riffs and melodic patterns. Phil’s yearning and heart-felt vocals soar and climax on the ridiculously catchy chorus: “Hear me, hear me. You can change the world. You can be the change!” A strong, expressive guitar solo and some uplifting keyboard noodlings adds to the fun. Classic, thoughtful and refreshing melodic rock indeed, redolent of Magnum at their imperious best.

By contrast, Painted Smile has a darker and sinister ‘carnivale’ feel throughout. Adam keeps the funeral beat steady, with deft percussive fills, and dense supportive bass pushing this ever so off-kilter track wonderfully. Phil is the ringmaster here (or is he Pennywise the clown?), as he dramatically recalls the tale of the sad, troubled clown behind the grease paint, whilst guitar and keyboards intertwine unselfishly. There is some playful, waltz-like interplay between the band in this real ensemble piece and the compact surroundings of the venue add to the mysterious, dark feel. 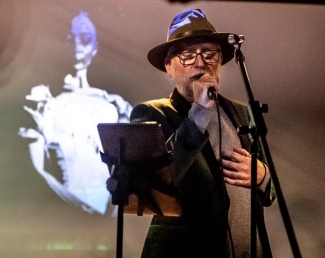 Something to Believe In, the closing ballad from the debut album, gets a rare outing, and Phil excels with some of the most dramatic and powerful vocals you are likely to hear in any band – regardless of genre. A real tour-de-force, with the band adding depth to the conclusion, especially Ade’s guitar and Gary’s lush keyboards.

Run, by contrast, is a joyful, melodic step up in pace, with some beautiful guitar runs from Ade leading through to an undulating tempo, toe-tapping beat and Phil’s vibrant and spiritually hopeful vocals: “Run. Find a place of rest. Run and leave this world behind.” Bass, guitar and keyboards all have their moment in the sun as well, and it’s a warming piece of exuberance that goes well with the audience.

The first set closes with the more atmospheric power ballad Different Ways, the closing track of the latest album. Phil’s poetic reference to his writing quill, “And now my words take flight on borrowed wing, with blood as black as night…”, echo and scatter, before the intensity gradually rises and soars to a stunning climax even more dynamic than the studio version. Once again it is Phil’s evocative Squire-like bass and Gary’s symphonic keyboards that provide the run through to Ade’s stunning, extended guitar solo, rising higher and higher, wringing out that last drop of wrought emotion to sustained and enthusiastic applause.

A short break and a chance to replenish my glass and chat to the band’s photographer, Jim Donnelly, and dare I say artistic director, who has been doing a fine job in co-ordinating the videos and images on the stage screen – which complement the music so well. 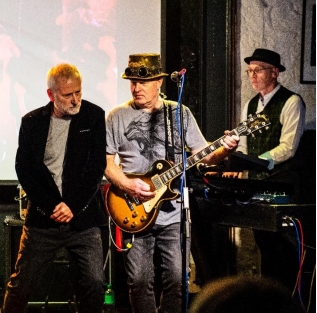 Set two begins with the impressive Days of Innocence, with Ade’s chiming guitar and Phil’s bass intro, before Stuckey’s melodramatic lyrics are delivered, almost Queen-like, recalling our journey through life from hopeful youth on to wistful old age. The warm, friendly interplay between the band is most obvious on this live highlight, and when Adam and Phil begin the closing march pattern and Ade and Gary sprinkle their magic, you suddenly have a real symphonic prog rock epic to savour, and one you can’t help but sway and nod as you seemingly join the parade.

Age of Renewal, the band’s knowing nod to mid-period Rush, is greeted enthusiastically by the proggier members of the audience, and it is a track where every band member combines so impressively. Once again, it is a song that truly benefits from being performed live, as it elegantly twists and turns through to its rich and resonant conclusion. 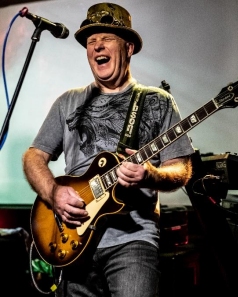 With three albums to their name, Stuckfish now have a wealth of material to play, and Wall of Silence from Calling is a riff-driven slice of classic rock – with a chorus that the likes of Thunder and Def Leppard would kill for. Sticking with the debut, Overwhelmed is a chunk of Judas Priest-style rock with Ade thoroughly enjoying some metal-like guitar shredding as Adam pounds away. Phil’s vocals are pure Ronnie James Dio, and whilst this part of the set has little prog rock to it, it is a refreshing and enjoyable contrast, showing the band’s versatility and range.

The enigmatic Yearn makes its live premiere and is very compelling indeed. Delicate keyboards and guitar and synthesised horns give the song a late-night modern jazz feel that is both hypnotic and complex, with Phil delivering another vocal masterclass. Not the easiest track to play live, but the band manage to capture the feeling of intense longing well. Ade’s guitar is suitably restrained where necessary and hopefully it can start to appear more frequently in performances to come. 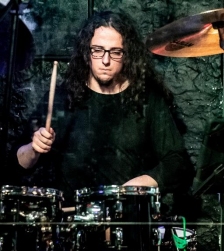 The concert ends with an impressive one-two from The Watcher album. Fallen Angels is full of mystery and magic, with Gary replicating Thijs Van Leer’s flute improvisations on keyboard and Phil’s voice soaring up and down the scales effortlessly. However, it is Ade’s breath-taking guitar solos, yet again, which steal the show.

Just time for The Watcher to close proceedings very satisfyingly, and marvel at how the band mesh together so effectively. Changing moods and tempo, lovely chord changes and a powerful chorus of “Rise, The Watcher. The chosen one has come…”, belted out by Phil. The melodic rock and prog elements, merge and embrace, and we drive at pace through to a bombastic, head-shaking crescendo accompanied by Ade’s final guitar foray and a frantic rhythm section. That’s how to end a show! 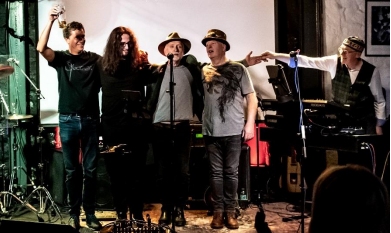 I reluctantly say my goodbyes and as I journey south through the dark, rugged and beautiful landscape of Northumberland, I have time to reflect on a polished, dynamic and melodic performance that would have graced any musical venue – regardless of size. Stuckfish are but one of many wonderfully talented bands out there plying their trade in the UK these days – with no expectation of the wealth, recognition or the audiences they might have got if they had been around in the heady days of the ’70s. Bands who record and perform live for the sheer pleasure of doing so, in front of an appreciative and knowledgeable audience – whatever the size might be.

However, I can smile and count myself lucky to be able to see a band of this quality in such a cosy and intimate setting and not in a cold and soulless arena or warehouse. We all need to support live prog at present and get out to venues and support them and the musicians in these demanding economic times. if you haven’t seen Stuckfish live, I strongly recommend seeking them out when they venture closer to you in the near future. You won’t be disappointed!