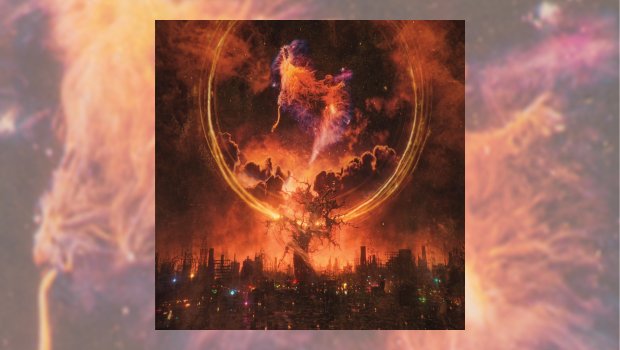 New music from Djam Karet is always a cause for celebration, and given the numerous other projects Gayle Ellett has on the go at the moment, (The Electromags, Kelp Dwellers, etc.), they perhaps aren’t as frequent as they once were. This is most certainly new music, although not newly recorded as such; this album was created from the same sessions which gave us their last album, A Sky Full of Stars For a Roof. Before you start thinking this has been stitched together from a bunch of cutting room floor rejected material, think again. This is very much a companion album, and the quality is just as high as on the previous record.

The fact that Island in the Red Night Sky was born from the same sessions, however, is very evident. The atmosphere and instrumentation is similar, the approach to composing consistent, but the music is distinctly different. To my mind, Island in the Red Night Sky is a little more ambient in feel, perhaps sounding a bit more improvised, but it sits very comfortably next to its predecessor. Again, Gayle Ellett plays a raft of different instruments, giving each track its own personality and mood whilst maintaining a consistent timbre to the overall soundscape. The Master’s Palace, for example, is built on a Floydian keyboard drone overlaid with rippling sequencers. This forms the base layer over which other instruments build a riveting sound world, with acoustic guitar, electric guitar, then sitar (courtesy of Todd Montgomery) and harmonium. Tinkling synths tickle the ears to its conclusion, and one is lulled to a satisfying sense of oneness.

The opening piece, Arrival, begins with another Ellett trademark which he has utilised since day one, and that’s field recordings. Seagulls usher us in before ambient synths fade in and an acoustic guitar plucks out a melody. Again, as so often with this band, songs change in mood and style without warning, and this is the case here, and we soon have delicate electric guitar changing the mood before Henry Osborne plays a lovely grumbly bass solo. In contrast, CODE-T1242 has a rather Welcome to the Machine vibe going on, and this is picked up in Gayle Ellett’s video for the piece. It sounds very sci-fi and slightly unnerving, and quite different from the generally organic feel of much of the album.

Several tracks recall ’80s Tangerine Dream, especially in the intros, but there is always development beyond that starting point into uncharted waters, and the results are invariably fascinating and rewarding. The Other Side is set up with the sound of grasshoppers and a turbo-prop plane, then a pulsing synth and seemingly random squeaks and fizzes, mysterious keys and some ethnic chanting which take us to an unspoilt savannah. You can virtually see the setting sun, and then an acoustic guitar motif right out of Topographic Oceans (honest), which sounds perfect in this setting. It’s a wonderful piece of rich musical tapestry, the sort which Djam Karet excel at.

Woolsey Town is one of the slightly longer excursions into the unknown, with discordant synth chattering leading to Eastern intrigue and a repeated acoustic guitar motif, slowing to a halt as keyboards take over, giving a Vangelis Bladerunner-like backdrop. It’s futuristic and strange, but strangely beautiful. Finally, A New Dawn concludes the record with some fine electric guitar from Ellett before we fade away with the sound of the gulls.

I could go on and on about how joyous it is to hear this band creating their own unique blend of spacey progressive ambient prog, but I imagine you get the idea. The imaginative compositional style, the wonderful use of unusual instruments combined with the more traditional guitars, bass, drums and keys, and the attention to detail in the sonic landscapes they inhabit makes Djam Karet a band you really need to hear.