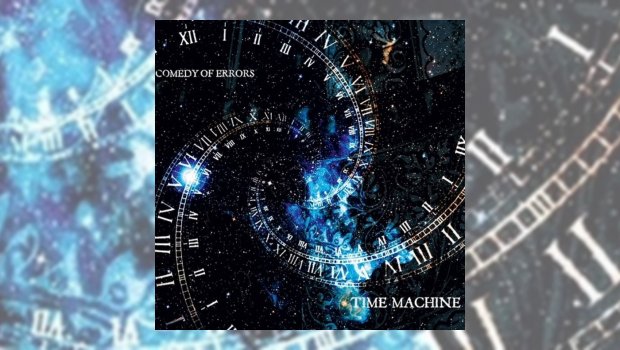 Comedy of Errors return with an ambitious new album, Time Machine. Five years is a long time since their fine 2017 album House of the Mind, so it is perhaps apt that Time is an important aspect of this new album. What have Joe Cairney, Jim Johnstone and the rest of this fine veteran Scottish band come up with in this album? Was it worth all that Time waiting?

Time Machine opens appropriately with a real journey back in time, musically and thematically, with The Knight Returns. Comedy of Errors have been a notable live progressive rock band dating back to the 1980s, contemporaries of bands like Marillion and IQ, but for some strange reason they never managed to release an album back then. They reformed in 2010 and released the excellent ‘debut’ Disobey in 2011, well over 20 years after their beginnings. Vocalist Joe Cairney has shared that The Knight Returns has its origins in an old song the band wrote in the ’80s called Behold The Knight, which has been updated and significantly extended. The song’s nostalgic roots in the neo-prog style are clear, and they suitably ride their Prog Steeds into musical battle with galloping keyboards and valiant guitar flurries ostensibly evoking a sense of chivalry, but the thread of time also runs through the lyrics. The Knight Returns is quite a dramatic opening piece and showcases the band rollicking along tightly with Joe Cairney singing with his usual aplomb and control. If that track takes us back to days of chivalry, the later instrumental The Past of Future Days takes us back to another time and is a slice of pure ‘Regency Prog’, elegantly proceeding with lush harpsichord from Johnstone, who is clearly the driving force behind this album with his keyboard artistry. This whimsical musical interlude lays upon a glorious and subtle bassline from John Fitzgerald, underpinning the stately dance-like waltz.

Jim Johnstone wrote all the music and lyrics for this album and Joe Cairney has remarked that on Lost Demigods Johnstone had fun with the lyrics, referencing many of his heroes including Galileo, Leonardo Da Vinci, Shakespeare, Jung, Einstein and Isaac Newton, imagining them all as ordinary modern people whose genius was never recognised, and questioning how many other great artists and scientists over the years were never identified. It’s quite an unusual song for Comedy of Errors because it rolls along as a fairly conventional but really catchy pop/rock song, even with a chanting ‘Na na na…’ refrain. Johnstone adds some subtle musical touches, such as the opening bars echoing the beginning of Beethoven’s Fifth Symphony, with even a tiny hint of Pink Floyd’s Shine on You Crazy Diamond thrown in for good measure. The relentless rhythm is driven on powerfully by Bruce Levick on drums and a mid-song bridge throws in some electric guitar licks before the band peel out a brief nod to Beethoven’s Ode to Joy. This is a real ear-worm of a song which will go round and round your brain. Is it prog? Of course not – but who cares when they are having such fun?!

Never fear Prog Purists, in the centrepiece of the album Comedy of Errors serve us up a mighty feast of ornate melodic progressive rock in a politically powerful and yet poetic observation on modern America, Wonderland. They present an epic piece which initially harks back to seemingly better days when America led the Western World, with achievements such as landing on the Moon:

“Time there was you’d shoot the moon,
You gave us hope from fear,
Time was you fought for right…”

However, Wonderland goes on to mainly lament the decline and turmoil of a country now seemingly beset by division, police violence, a self-destructive obsession with guns, racial prejudice and until recently was malignantly led by a completely untrustworthy, mendacious and manipulative President who cynically preyed on people’s fears and whipped up their prejudices for his own aggrandisement.

But why is the song called Wonderland?

Who knows if that’s the reason for the title (songwriter Jim Johnstone probably!) but it is clear that Johnstone believes that the ‘American Dream’ has become somewhat tarnished in recent years, and a lot of the focus here is on the toxic influence of Trump. Lines such as “A lying fox will spin his tale…” and “Building walls so you can say, ‘We keep out those who would take our world away’” are clear references to that woeful ex-President. The Latin phrase ‘Nuntii fallaciloqua’ (which could be loosely translated as ‘Fake News’) is followed by Cairney singing “Trumped up charges really want to make you die…”, leaving us in absolutely no doubt as to who the central focus of this multi-part composition is. These are pointedly hard-hitting lyrics which confront controversial subjects, but is Wonderland any good as a song?

I could bore you with a detailed breakdown, but I would not do it justice. One of the main highlights as this piece rolls forward is the ever-increasing power and momentum as this musical beast slouches menacingly towards Bethlehem, Cairney intoning bleakly “What have you done, What are you thinking, Nowhere to Run, What’s that you’re saying now?”

The guitars of Sam McCulloch and Sam Spalding weave weirdly distorted lines of chaos and Levick’s drums explode spectacularly across this dramatic musical vista. Meanwhile, Johnstone builds vast panoramas of organs and keyboards – it just sounds enormous and ominous. As we approach the end of the song, a rolling keyboard-led litany of ills descends into a chaotic maelstrom of distorted guitars and thunderous drums with the final rather chilling (and hopefully not prescient) line “The Missiles are flying…”

Wonderland underlines that Jim Johnstone is clearly the main architect of this album, conjuring evocative soundscapes upon which this talented band paint their own musical sounds. Joe Cairney with his distinctive higher register voice is outstanding throughout, but he is particularly effective on this varied piece requiring a range of singing and intonation. Wonderland may be one of the most impactful and best songs Comedy of Errors have ever produced, showcasing Johnstone’s fine song writing and the skill of the whole band in realising his musical visions.

The main album finishes on a much more personal note with Time Machine. A simple plaintive piano melody and soft percussion starts under Joe Cairney’s delicate, heart-felt vocals. This is clearly a deeply felt lament about loss which proceeds in an elegiac fashion, with some synth horns adding to a slowly building crescendo before a strangely brief discordant interlude. This is followed by a very sombre section based on a French poem by Victor Hugo (more well known for The Hunchback of Notre Dame and Les Miserables) which proceeds with a suitably sad Gallic flavour. Jim Johnstone gently sings in French “Demain des l’aube” (‘Tomorrow at Dawn’), which Hugo wrote after the death of his recently married daughter in an accident in 1843. Clearly a broken heart and a sense longing permeates the whole song with the yearning dream of building a time machine to be with a deceased loved one once again. Some will find this piece, particularly the beautiful opening section, to be a beguiling hymn to loss. However, others – including this reviewer – may end up feeling that it does not work for them, as sustaining that sense of melancholy over a 12-minute piece is difficult, lacking sufficient dynamism to engage the listener, even with the restrained, subtle guitar solos over the ending. On the other hand, some (with possibly more patience than myself!) will love that slowly building regal pace… it’s all about taste after all.

Perhaps suitably for a time machine themed album, the CD edition finishes with the bonus track of Disobey, recorded at Rosfest USA in 2016 and going right back to their debut album. Presumably this bonus was added to the CD edition as it would not fit a vinyl version – whatever the reason, it is a reminder that Comedy of Errors are a truly excellent live band and well worth seeing.

Time Machine is a very welcome return and must rank as one of the premier melodic progressive rock album releases of 2022, underlining the status of Comedy of Errors as one of that style’s finest purveyors. 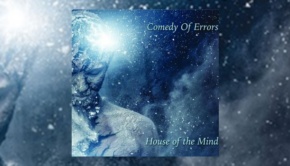 Comedy of Errors – House of the Mind →