This is my first visit to the Shepherd’s Bush Empire and I absolutely love it. Built in 1903 as a music hall, it became the BBC Television Theatre in 1953 and then a general music venue from 1994. As a space it is almost perfect for music. The acoustics are fantastic and the views of the stage from just about every angle and every level of the building are excellent. It’s a building with both a good sense of history as well as a sense of presence and is the perfect context for the U.K. leg of Katatonia’s Fall of Hearts tour. 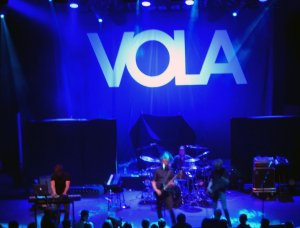 First up are Danish 4-piece band Vola. It is a tremendous shame the hall is still filling when they arrive on stage as a lot of people miss a fascinating and quite evocative set of fresh and invigorating music. Built around their debut album Inmazes, there is an imaginative and lively blend of traditional progressive rock, forceful crunching metal over-layered with strong textured electronica and the most uplifting symphonic harmonies and melodic vocals.

Barely fifteen minutes after they depart, Agent Fresco take to the stage. The Icelanders are simply astonishing. From start to finish they are a frenetic blur of movement, energy and passion. I don’t think I’ve seen a bass guitar wielded in quite so many ways before but it was certainly an education! 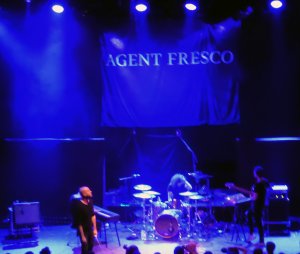 The set largely draws material from their latest album Destrier and they attack it with spirited intensity, vigour and an engaging exuberance. The music soars, sweeps, envelops, never relenting, never yielding, communicating a driving and creative vitality in everything they do. Certainly by the time they leave the stage, you’d be excused for thinking they were the headline act given the lasting and rapturous applause from the audience.

As the lights dim for the third time there is a hushed, almost reverential sense of heightened anticipation as the background lead-in to opening number Leaders brings the statesmanlike Kataonia to the stage. Celebrating 10 years since it was originally released, the first of two sets being played tonight sees them perform The Great Cold Distance in its entirety. The audience are knowledgeably enthralled and utterly engrossed in every aspect of every track, receptive to the changes in moods, nuances and emphases in the music.

Indeed, it’s not hard to see why. The album is a devastatingly moody and hugely atmospheric engagement with some of the darkest themes in human living and the way it is delivered from the stage this evening is exemplary in showing how to reflect on pain, solitude and suffering in ways that are accessible and resonate with your audience.

As the set progresses there is a visible and tangible feeling of reciprocal connection between band and audience. A casual glance around the auditorium shows the delightful intensity and the eager willingness of people participating in well known lyrics to often listened, lovingly cherished tracks, hands aloft or held with other hands, swaying, gyrating in happy ecstasy. The message is clear: we know, we’ve been there too and you’ve got it absolutely right. 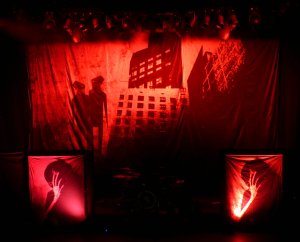 It is almost a relief when the set ends, a brief pause arrives and we get the chance to let go, recover and gather ourselves again. What strikes me over a chilled Tuborg is two things. First, I am not a fan of bands backlighting themselves so that the set is played in a state of almost semi gloom with the musicians appearing as shadowy silhouettes at the front of the stage. I grant, however, that it works perfectly in terms of the atmosphere and mood of the music being played this evening.

Second, the exception to this is the drummer who sits on a raised dais in the centre of the stage in the full illumination of multiple beams of white light. New drummer Daniel Moilanen is stunningly spectacular, and what this evening brings home with full force is just how apt his positioning is. Katatonia are built on and around their drum rhythms which are at times, breathtakingly complex and brilliantly original. Moilanen is magnificent, the beating, dynamic heart which makes the whole soundstage happen and cohere. 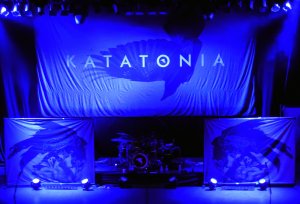 The second set commences with a glitch to the equipment with some light-hearted comments from the band before they reboot the computer and storm into Last Song Before the Fade. The emotion, energy and sheer forcefulness of the music creates wave after wave of spirited and engrossing excitement. The stalls are a blur of joyous movement, the seated areas vibrate with urgent heads nodding as one to the heat and passion of the music.

The tour also marks the 25th anniversary of Katatonia themselves and the song selection demonstrates an excellent diversity across a wide range of their back catalogue. It doesn’t take much to discern the journey of progression this band have taken from where they began and it is exhilarating to hear songs from across the years seamlessly blend and weave with each other.

Despite all the gloom, the doom, the angst and the depression, the band are clearly having fun and by the time we breathlessly reach the encore, the lively audience are happily spent and equally contented with the evening’s exertions. Katatonia leave the stage having delivered an absolute masterclass in stage craft and the power of musical empathy which is a pleasure to have experienced.