The burden of expectation weighs heavily on Jeff Wayne’s Musical Version of The War of the Worlds, to give it its full and proper title. Released thirty eight years ago in 1978 with an all-star cast featuring Richard Burton, Julie Covington, David Essex, Justin Hayward (Moody Blues) and Phil Lynott (Thin Lizzy), it quickly established itself as an innovative progressive and symphonic rock concept album and in the process became an iconic and defining record for an entire generation.

Currently listed in the top 40 best selling albums of all time with over 15 million sales to date, it has spawned multiple recordings, a DVD, an animated film, world tours, staged arena performances and is now open for a three month run at London’s impressive 2,000 seater Dominion Theatre. The early reviews have not generally been kind with critics variously lambasting the stage production, the ‘heavy metal music’, the lack of animation among the performers and the general sense of wonderment as to how this possibly meets the accepted standards of a West End Musical.

Such criticisms are, I believe, fundamentally misinformed and reveal a quite singular ignorance on the part of such critics, not only about what it is they are listening to but consequently what it is they are watching. Jeff Wayne’s The War of the Worlds is, first and foremost, a conceptual orchestral piece which was, and to my mind still is, an inventive and daring experimental coming together of progressive rock, symphonic classical orchestration and character driven performance.

It is therefore no accident that Bill Kenwright’s influence in staging this production can be seen in making this primarily about the music. Both the band and the orchestra are placed on two layered and carefully constructed moving stages that sweep (at speed!) in and out in accordance with the story, thereby making them a core part of and key contributor to the dramatic action. Jeff Wayne takes a central position as the conductor on a raised dais built in to one of the stages. The arrangement works very well indeed, giving the music a dominant but not over-bearing influence within the context of the performance. 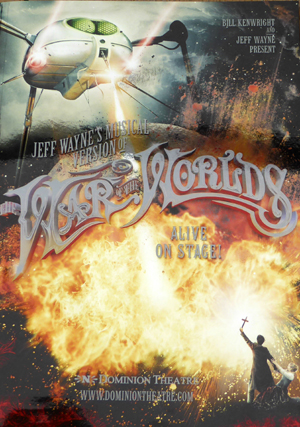 Both groups of musicians are, without any doubt, absolutely outstanding. Stage left, The Black Smoke Band are masterful; as a unit they are tight, dynamic and beautifully expressive; the drumming is rich and full of character, supporting and complimenting bass work which is emotive, powerful and ever present. The keyboards are an absolute delight, though at times curiously stifled, but the atmosphere they create allow the lead guitar to sing with a voice which is incomparable and soulful. Kudos, in particular, to the percussionist, perched on top of the platform yet adding unexpected delights to the soundscape.

Stage right are the ULLAdubULLA Strings who are simply scintillating, casting an uplifting energy and vitality over the proceedings. The precision of their work is supreme, the sound they bring full, engaging, sweeping around and intermingling with the band and the cast, laying a sensual and permeating atmosphere against which everything else is framed. In the centre, Wayne conducts with passion, with focus and with complete commitment. He leaves no doubt about his conviction in the music, the overall project and in the mesmerising blend he has created and achieved by so intelligently bringing these two disparate groups together.

Once you grasp that the production is primarily about the music, it becomes easier to understand what you are watching. Most West End musicals place the spotlight squarely on character and plot as the means of generating the musical episodes within the story. In this production, the roles are reversed; it is the music which generates the action, the characters portraying scenarios and vignettes which link the plot together within the overall context of the musical narrative.

Will Barrett (standing in for Michael Praed today) does an excellent job as The Journalist and the dynamic with Madalena Alberto who plays his fiancée Carrie is delightful, particularly on the classic Forever Autumn and additional variations written for the production. Jimmy Nail is an unexpected choice as Parson Nathaniel, but his stage presence is powerful and increasingly electrifying as he descends into madness. Heidi Range as Beth plays a wonderfully sympathetic role, her vocals a particular highlight of the performance. Daniel Beddingfield is an energetic Artilleryman who is the focus of attention whenever he appears, along with David Essex, calm, assured and authoritative as the Voice of Humanity.

To be fair, not everything works. The opening of Act Two is a little ponderous with the spread of the red weed represented by what seems to be an overly long choreographed dance routine. The emergence of the Martian from the capsule wouldn’t be out of place on an episode of The Muppets. The appearance of the Martian in its tripod is somewhat let down by the movement of the feet which unfortunately undermines the actual menace of the pod itself. And Liam Neeson as a 3D projected narrator works as well as can be expected but saving pride of place during the end of show applause for a hologram seems unnecessary.

But these are, ultimately, no more than niggles once it is accepted that they are props to the music itself, not the focal point of the production. They are symbols of the musical action, never intended to be stand-alone or isolated pieces in and of themselves. And this is why, to this day, The War of the Worlds stands as an exceptional achievement which somehow manages to bring together so many different elements in such a unique and enthralling way.

If you grew up with the album, you will love this production even if – as I did at times – you just close your eyes and get lost in the music. If you are not familiar with it, listen to it a few times first, take some time to find out something about it – and then go and have a thoroughly enjoyable evening. It is good fun built on fantastic music which captivates and enchants.