French wonders Lazuli return with their sixth album, Nos âmes saoules, and – as with everything that this fantastic band do – I have been awaiting it eagerly.

Cards on the table time: I am a huge fan.

The glorious set they played at Summer’s End in 2013 turned Lazuli from an unknown quantity into one of my favourites instantly and that position hasn’t wavered. There is just something about them! I’m sure that anyone who has seen them live would attest to that and their recent support slot of the lengthy Fish tour has hopefully raised their profile with a lot of people.

As usual the concise nature of the songs pays dividends and it sounds stunningly right through a decent set of speakers, the detail inherent in the music of Lazuli coming to life, the deep bass after a stripped back voice and piano start to Le temps est à la rage being a case in point. After setting the scene quite beautifully the band up the ante whilst keeping firm control of the tempo. The basis sounds like something that Fish himself might have come up with but the uniquely Lazuli details are what make it fly, an extended and sinuey solo from Gédéric Byar playing it out.

Le lierre has a poppier edge that works well, a guaranteed live favourite with Domi Leonetti’s spectacular voice lifting it to the heavens, grit from guitar and drums driving things forward. I’d love to know what all this is actually about but don’t have the time or patience to either learn French or tap it all into Google Translate, suffice to say that it all sounds beautiful. Swirling keys give way to acoustic guitar for Vita est circus, punctuated by bursts of orchestral grandeur with Claude Leonetti’s singular Léode werning and squerning away to unsettling effect.

The songs are broken up with instrumental vignettes, the first of which is the French horn flavoured Fanfare Lente – Slow Wind? – which has the woozy effect of a brass band accompanying a weary circus and as such works well as a coda to the previous track. Chaussures à nos pieds (Shoes on Our Feet?) is twinkling and delicate, built on layers of keys and Léode. For a band without a bass player, Romain Thorel’s right hand keys make for a fantastic alternative, rich, deep and hitting just the right spot when required. Whistling is an often overlooked art but Domi adds it to his repertoire before the stomping funk of the track’s second half, Vincent Barnavol’s drums strutting wilfully as the pace picks up to another ripping solo from Byar.

Le mar du passé (The March of the Past?) sees the vocals delivered in a stealthily sinister fashion over a sliding rhythm of synthesised percussion. When the track bursts open, the industrial elements of the Lazuli sound emerge, the clanking nature of machinery also inhabiting the second instrumental, Le labour d’un surin. Much to my amusement, Google Translate’s first stab at this was “Ploughing a Superintendent” which brought all manner of worrying images to my over active imagination! Further investigation came up with ‘Ploughing of a Knife’ which is likely to be closer to the actual. Dear French Speakers, please don’t hesitate to correct my woeful ignorance…

There’s almost a Wild West feel to Les sutures, a widescreen emptiness of rattlesnakes and unsavoury characters brought to menacing life. The instrumental end section is orchestrally symphonic and quite breathtaking, Léode moving things to the “Wild East” with an Asian texture. The title track (Our Drunken Souls?) is an enigmatic thing that starts with delicacy, heartbeat drums picking up a rhythm which builds and expands to a thumping finale. This is high quality art rock with a human face that ensures that the feet keep tapping away. People actually dance at Lazuli gigs – even arthritic old prog fans – the music possessing a primal, rhythmic capability that is almost irresistible.

Romain Thorel’s deft piano solo Un oeil jeté par la fenêtre (An Eye Thrown Out of the Window?) cools things down and acts as a counterweight and quieter variation to the opening track. A complete delight, it demonstrates Thorel’s talents and is a perfect end to an album of singular variety and thoughtful dynamics, not a roller coaster ride but one of great swells of intensity alternating with individualistic beauty. The condensed and “old fashioned” running time of a little over 40 minutes serves it very well.

As expected, there is much to enjoy here and Nos âmes saoules is an album that adds much to Lazuli’s catalogue of recorded works. However, it does not tell the whole story and the true majesty of Lazuli’s live performances remains elusive. This is a band that retains a uniqueness, both in their music and visually, and live is where the magic really happens. I cannot rate this band highly enough and despite the songs only telling part of the story they are the foundations and framework upon which the finished building is constructed on stage, patio, conservatory, crazy paving and all. Just go and see them whether you think you might like them or not. Oh, and buy this too, it’s great. 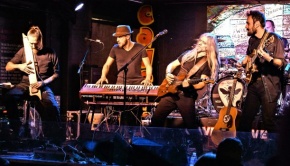