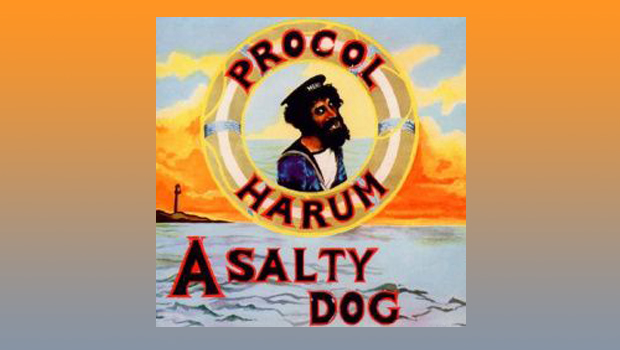 Procol Harum played a significant role in the early days of progressive rock and A Salty Dog, released in 1969, may not be as well known as contemporary albums from such luminaries as King Crimson, VDGG, Yes and Pink Floyd, but is important never the less. Progressive rock to me is about pushing musical boundaries (I know this is a subject of debate, this is my personal thought) and this album, taken in its time context, did just that.

Procol Harum first showed signs of their progressive leanings on the previous album, 1968’s Shine on Brightly, where they treated us to the 18 minute epic In Held Twas In I. Here they expanded their song writing but in parts remained true to their R&B roots. Indeed their progressive pedigree could be demonstrated by the fact that both In Held… and A Salty Dog have been covered by the progressive supergroup Transatlantic.

This remains partly true for this release but there is no epic this time, shorter songs are the order of the day. A blend of classic lush orchestration with the use of sound effects, and more importantly good writing and storytelling. The music is dramatic and dynamic throughout, none more so than on the 4-minute plus title track and Wreck of the Hesperus, indeed there is a nautical element to both of these songs.

A Salty Dog was recorded at the famous Abbey Road studios and throughout the playing is exemplary from all concerned, including one Mr Robin Trower on lead guitar. The album has a definite ’60s vibe to it but there are indications for the avid listener of the direction that their ’70s music could, and indeed did, take.

The album has been remastered from the original tapes for this release and the sound is crisp with some clear definition to the instruments. Also available as a standard one disc version, this review is for the Deluxe Edition which includes a second disc with 12 bonus tracks. So what do you get for your money? Well, some Radio One Top Gear sessions and a Symonds on Sunday session, which are all of good quality. There are four live tracks recorded in the USA during 1969 which ably demonstrates their R&B roots (in particular Goin’ Down Slow which features some excellent blues style guitar from Trower), the A & B sides of the A Salty Dog single plus a very raw take of a backing track of The Milk of Human Kindness. Three of the tracks are previously unreleased. The packaging is very good, the cover being a homage to the old Player’s Navy Cut cigarette packets (who among you will remember those?), and the excellent liner notes by Henry Scott-Irvine include some nice photos. Also included is a small sized poster of the main cover art which includes all the lyrics, and in nice big print for us aging prog fans!

Overall this is a very nice release of an important album which would sit nicely in your Procol Harum collection. If you like to collect albums from Progressive Rock’s rich history you could do worse than to add this release. I have found it to be an intriguing listen, the music revealing a lot about a band I was not overly familiar with. Now I understand more clearly their part in the development of Prog in its earliest days.