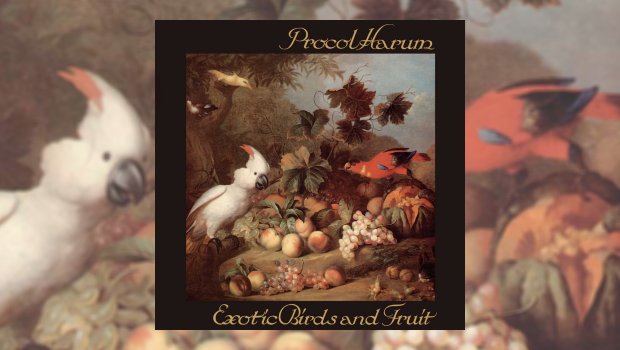 This 3CD set reissued by Esoteric Recordings consists of Procol Harum’s seventh studio album, Exotic Birds and Fruit. Originally released on the Chrysalis label in April, 1974, this was the band’s return as a five-piece and going back to their rocking sound, moving away from the symphony orchestras of previous releases. According to an interview that Gary Brooker gave to Cherry Red TV’s Mark Powell, at the time of the release of the Still There’ll Be More anthology box set, after the release of Grand Hotel it was time move away from the orchestras, both live and in the studio.

Exotic Birds and Fruit was recorded at London’s AIR studios during the winter of 1973-74, but there was a rough period of power outages during the recording sessions, due to wage disputes and energy saving brought in by Prime Minister Edward Heath’s ‘Three-Day Week’. As a result a generator had to be brought into the studio so that the band could meet the deadline for release in the spring of 1974.

Despite the difficulties of recording, Exotic Birds and Fruit is something quite extraordinary. From the noise of feedback and blowing into the Microphone while Mick Grabham asks “Is it on Tommy?”, it moves into a piano-led symphonic rock thumper, reminiscent of The Four Tops’ Sugar Pie (Honey Bunch), with Nothing But the Truth. Praised by Elton John and Jools Holland, the opening track is a hard rockin’ eruptive cannon blast that brings together elements of soul, rock, and ascending melodies.

Beyond the Pale is part Paganini, part Threepenny Opera, and a drinking song. It describes the search for the Holy Grail and who takes up the challenge. There’s a cabaret flavour to the song that suggests the dangers and risks to be endured in thus survival of the fittest. It almost reminded me of something from Gail Simone’s run of Batgirl comics, specifically the story A Blade of Memory, Batgirl clinging to life after being stabbed by Knightfall. I always imagine this song would fit the story as you can imagine the fight sequence near the end before the band plays an incredible ending at the count of ‘1, 2, BOOM!’

The cornerstone, As Strong as Samson is a hymn. Like looking at the images in the Fortune Teller’s crystal ball, Brooker gives us the real truth on how lawyers, brokers and bankers are destroying the world with corruption and greed, and the prayers you’ve been saying won’t work. The only hope is to bring peace while fighting for freedom, but when you listen to the bonus track which is sung in D-flat as they drop the sound to a semitone, it has a haunting tone and makes for a sadder version of the piece. Brooker’s minor piano keys on The Idol gives us details of the skeleton in the closet, but with cards up his sleeve he cannot be trusted. Keith Reid’s lyrics tell the story, forming illustrations behind the song, and with the fourth track it feels like you know something horrible is going to happen. The organ and drums set up tension by creating a tightrope, never knowing if the rope is going to be cut or not, but Mick’s guitar comes in at the last minute as a clear sign of hope.

The original version of Monsieur R. Monde was recorded in Olympic Studios in 1967 as Monsieur Armand, originally appearing on a U.K. compilation released in 1976 on the Fly/Cube Records label as Procol Harum – Rock Roots, subsequently being included on the Salvo Records reissue of Shine On Brightly nearly 10 years ago, and the 3CD deluxe edition in 2015. The 1974 version that appears on Exotic Birds and Fruit has a grand epic sound that is different from the 1967 take, Grabham playing those mind-blowing riffs, B.J. Wilson hitting the cowbell, Brooker laying down the law. I can also spot the band adding a twist through the chorus melody sung in the style of Frank Zappa’s Fifty-Fifty. I can imagine the band are having a blast revisiting the song again and bringing it to life.

Fresh Fruit should definitely be up there with Mabel and Good Captain Clack. Procol Harum definitely have a great sense of humour, this song covering the healthiest diet as recommended by doctors, also good for dogs as they chase the bouncing ball. The closing track, New Lamps for Old, is another hymn, as if recorded inside a church, Brooker moving from piano to electric Rhodes to give a wonderful heavenly end. Chris Copping’s organ and B.J. Wilson’s drums help each other out to make it to the Pearly Gates, as if preaching the gospel for some amazing melodies. I imagine this song could have used the orchestra for one last run to give it that shining and symphonic moment, the final journey on Procol’s classical trip.

The B-side Drunk Again is a bonus track, the band’s tribute to the late great Eddie Cochran and bits of Still There’ll Be More, a return to the roots of 1950s rock ‘n’ roll. Piano boogie, Grabham’s guitar riffs in the style of Summertime Blues, Copping and Wilson’s powerful work together coming to centre stage.

The second and third discs in this set are live recordings made during the same time period, one at the Hippodrome, Golders Green on 22nd March, featuring an introduction by “Whispering” Bob Harris of The Old Grey Whistle Test for BBC In Concert, the other at January Sound Studios in Dallas, Texas, broadcast on KZEW-FM on 5th July. Chris nails down those organ parts on the second disc, Brooker heading down for his piano-concerto melodies on Bringing Home the Bacon and a booming take of Simple Sister. The BBC version of Butterfly Boys sees the band tipping their hat to the lyrical styles of Randy Newman. You can really hear the vibes as Gary describes the founders of Chrysalis Records, who were no doubt not too thrilled. They wanted them to change it to ‘Government Boys’, but the band refused.

The January Sound Studios recording on the third disc is fast and very powerful. Not only they were promoting their seventh album, but revising some of the classics they did back in the late ‘60s, kicking off with a full speed version of Conquistador. Mick is in overdrive as the band watch him create incredible ideas, not just riffs but improvisations, while Copping raises the temperature levels a notch. But then Mick steps into Robin Trower’s shoes with a hard rock approach on Long Gone Geek, Procol Harum going into that mode and taking the essences of both Led Zeppelin and Leaf Hound, the versions of Homburg and Cerdes (Outside the Gates of) doing justice to those classics.

Esoteric Recordings have never disappointed with their Procol Harum remasters and this reissue of Exotic Birds and Fruit is very good. Inside the packaging you get a mini poster of the album cover by Jakob Bogdani, known for his paintings of still life and exotic birds, a 28-page booklet containing liner notes by Procol Harum expert Roland Clare, including photos of the band performing at Crystal Palace and at Reading Festival along with a photo of Gary Brooker at a press conference.

I have been very impressed with Esoteric’s Procol reissues, since getting the ball rolling with the first four albums in 2015, and I’m looking forward to the next two which are Live with the Edmonton Symphony Orchestra, coming out near the end of October, and Procol’s Ninth, due at the end of November. So let’s head back into the paintings of Bogdani and explore the mystery with Procol’s music, searching for more treasures to find the real truths.