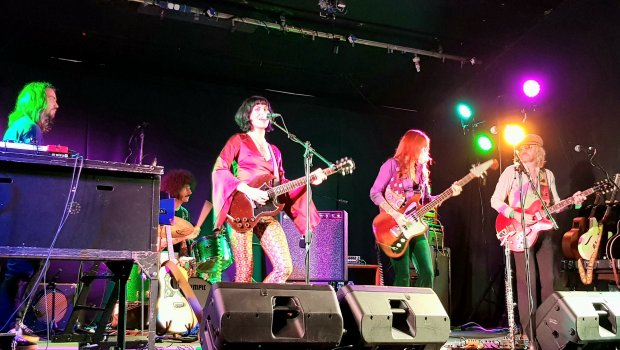 On a windswept and rainy night, a potentially trepidatious trip, with the ever present vagaries of train travel, out to the Essex town of Chelmsford beckoned for the first gig that actually required a proper coat for Autumn weather. It had suddenly seemed to get dark very quickly and the heavens opened just as I was leaving my house, but I was not to be thwarted as I’d been trying to see this terrific artist and her band again since the pandemic restrictions were lifted. I’ve seen various incarnations of Rosalie Cunningham plus band, the last time with a largely different line-up to the current, just before lockdown in 2020. Since then, gig clashes and cancellations through illness in the band back in the Spring had prevented me, until this night.

This was only the third stage outing for most of this new line-up (the first two having been at the Herzberg and Cropredy festivals in July and August), but it was the first actual gig for drummer Baptiste Gautier, who took over at short notice as regular holder of the sticks Itamar Rubinger was very sadly laid up recovering after treatment in hospital for a collapsed lung! All good wishes to him for as speedy recovery as possible!

Despite various such knock backs in her career, not least with her much admired previous band Purson (formed after the demise of her first venture, Ipso Facto) which broke up seemingly just on the brink of world domination, Rosalie has sensibly just got on with it. She’s a consummate professional musician, advancing her super-talented songwriting and performance skills, forging her unique mark on the progressive music world ever more firmly, and now performing simply under her own mellifluous name.

The Chelmsford venue, a short walk beyond the main town centre, and slightly alarmingly situated at the back of a Tesco’s car park was, as expected, a typical social club hall set up with rows of tables and chairs, and with the bar along the back wall. Sadly, tonight’s gig was rather poorly attended for the size of the place, and for a Friday night, but pretty much everyone there was a clear fan, or perhaps quite rightly newly impressed, as the merch desk was receiving steady trade throughout! (I narrowly missed out on the last purple T-shirt, curses!) No loud conversation at the bar by unsuspecting club members, these special gig nights on Fridays and the odd Saturday are put on by Black Frog Presents, and there’s an impressive future programme.

I suspect most absent fans in the vicinity were holding out for the special gig in Rosalie’s nearby home town of Southend-on-Sea two days later, which was to be recorded for a live album.

In uproarious and raucous support was keyboard and drums duo The Tuppenny Bunters, comprising Fiona and Dave Dulake. Also from Southend, they have supported and played in Rosalie’s band previously. 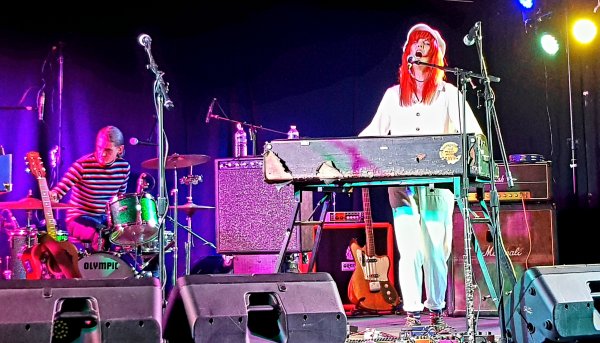 For a duo, they packed a hefty punch of short strident songs that I can loosely describe as thrashy ’70s new wave, plus a dollop of ’60s pop, whirling around on a merry-go-round! Both with frenetic playing and emphatic vocals, it’s Fi’s white boiler suited power stance behind the keys that was the focus. She was quite formidable to behold – and hear – as she manically, but still tunefully, shrieked and rasped songs from their new album, Tuppenny Hangover (currently only available on vinyl), her vermilion hair flailing as her ’60s-style puff-ball white cap inevitably escaped! They were a solid and impressive presence and a wonderful support for Rosalie; they don’t take themselves seriously, but they certainly do MEAN it!

I had hoped a few more punters might arrive during the break between bands, but sadly no more did and the total turn out was 30. There were no no-shows either, as I’d thought there might be with the bad weather and an unfortunate rail service; it turned out that some electric cables had crashed down on one route’s tracks, nearly scuppering my journey, but luckily I had time to turn tail and go the other way.

As small a house as it was, the set up was so friendly, convivial, and enthusiastic, that Rosalie Cunningham, retro-stylish as ever sporting a new bob hair cut, and her terrific band played tonight as if to a full house, apparently relaxed and thoroughly enjoying themselves despite the first-night-drummer-scenario. They are all such brilliant musicians, and, as noted at previous gigs, mutual admiration was much in evidence; Rosalie always heaps praise on, and communicates so well with, each band member, a beaming smile and a nod here, and a glance sideways there, with her huge expressive eyes conveying approval and delight, or perhaps instruction. 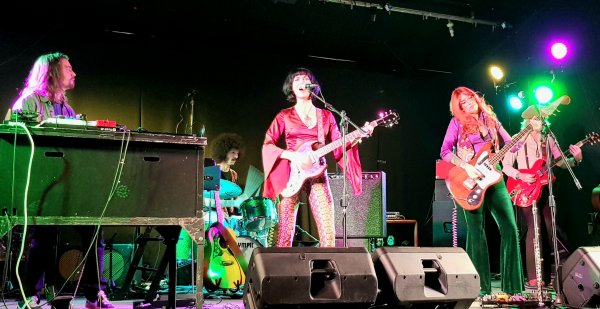 Rosalie’s music is a combination of many styles, but I can try to sum it up as vaudevillian-carnival-psychedelic-prog. It’s chock full of retro influences, but she shapes her own vibe and spreads her musical innovation and personality all over it, in such a way that, despite the homage element, it becomes something new and unique. 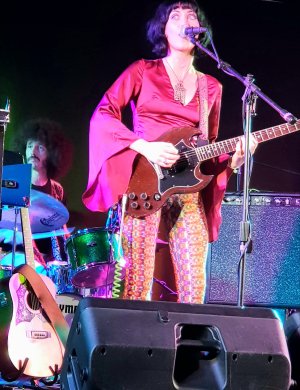 Totally professional, despite the circumstances, there’s no faffing about between songs; the many changes in guitar for Rosalie and co-lead guitarist and sometimes writing collaborator Rosco Wilson (previously known as Rosco Levee) were incredibly smooth, and just the right amount of song commentary and witty banter put paid to any potential hint of nerves – I saw none. I still remember, back in March 2020, Rosco bracing himself for a particularly complicated track, sighing and uttering into his mic, “Right, let’s go… fourteen minutes of hell coming up!”

The set comprised more than half of the new album, Two Piece Puzzle, appropriately enough kicking off with its first track, Start From the Corners, a suitably overture-like introductory instrumental with a dominant catchy theme to whet our interest. The band switched deftly between the newer songs and those from Rosalie’s self-titled first solo album from 2019, plus a few from single releases, with two from the Purson days. It was a well balanced choice from the many contenders, showing the great contrasts within the writing. The irresistible rock-pomp-romp Ride on My Bike, always a strong contender for favourite among the audience, was followed by the drama of Dethroning of the Party Queen where, stirring up the emotions with frills aplenty and swelling the sound throughout, Aaron Bolli-Thompson proved himself a whizz on a massive Hammond, and other keys in the set up that were obscured from my view.

Rosco and Rosalie alternate the verses’ vocal in the conversational Duet, Rosco’s voice tonight revealing its rich blues-tinged tendencies, and Rosalie going full pelt, effortlessly demonstrating the natural clear vibrato of her uniquely gorgeous tones. Another trilling keys passage here from Aaron lead to some full-on rocking out, and a mesmerising extended solo opportunity for Rosco.

Rosalie’s amazing range and high vocal prowess came to the fore in the contrasting uplifting beauty of Fossil Song – just stunning with its catchy chorus and psychedelic wah-wah guitar solo from Rosalie. Claudia also got a chance to show off her impressive flautist skills with an intro for one of the older, and most prog-formidable, songs of the night, Tempest and the Tide, during which her strong overblown playing, so easy to overdo into oblivion live, was neatly sequenced in with her dexterous bass playing.

The commanding attention Fuck Love followed, delighting the audience with its emphatic beat, rhythm changes, and, to some, daring vocals! A lilting riff and a syncopated jazzier rhythm and tone ensued for The Liner Notes; this one felt so fluid, with its intriguingly inventive contrasting section, and Claudia’s lovely backing vocals echoing Rosco’s guitar riff.

After the full-on rock of Riddles and Games, Rosalie announced a surprise cover, mysteriously suggesting that it was unlikely we’d know what it was until the vocals came in. She was right; although my brain nagged at me that I knew it, I simply could not articulate the title during the opening instrumental. And yes, it was brilliant, and still completely astonishing, when Rosalie sang the words of Eleanor Rigby with a beaming grin, revelling in our stunned faces! It instantly seemed like the perfect cover for them, as different from the original as it was, as Rosalie’s writing encompasses many influences, just as The Beatles’ did. After Baptiste flourished his sticks over an extended crashing finish, Rosalie triumphantly declared, “That was a lot of FUN!” 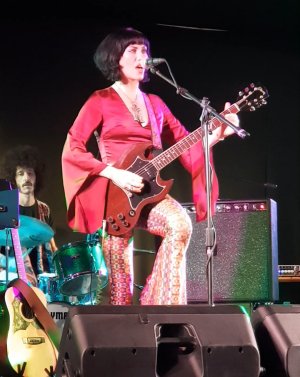 Prior to the start of the intensely tricky Tristicia Amnesia, Rosalie explained that this rendition might be a tad “half-baked”, Rosco echoing that it might not have as much of a “crispy crust” as would be ideal, given the recent misfortune, but here was a moment to celebrate the assured talent – and bravery – of Baptiste in stepping up to the drums with barely a week to rehearse! In fact, this was my favourite of the night, with its quality opening duo vocals from Rosalie and Claudia, inducing me to suddenly think of Abba, but with more pronounced harmonies, Baptiste pummelling away with soft fluffy mallets as it morphed into a full-on blues-laden heavy stomp, before a return to drama reminiscent in tone of a Camel/Caravan mix – a bit Nine Feet Underground but with real raunch! Rosco aptly concluded, “If that was likely half-baked, I think we cooked it!” to rapturous applause! Then up he stepped to the mic for lead vocals on Rabbit Foot, sounding as if he was from America’s Deep South, as the track rolled on in an almost Motorhead-like jam – the meanest they sounded all night!

The set finished with Chocolate Money, Aaron pounding his keys in a Southern Rock meets The Beatles’ Get Back meets Bowie’s Suffragette City – pure full-on rock and roll! If the venue had been a bit fuller, this one certainly would have seen some dancing down the front!

The sound here was great, thanks to an apparently well experienced engineer, and with only a couple of feedback issues promptly, swatted away. Baptiste’s drums were at exactly the right level, so no ear plugs required for me.

The super friendliness of the front of house, bar, and tech teams has avowed within me an intention to return, particularly as there are late trains back into London – indeed the lovely lady running the entrance point/check in offered me a lift back to the station, but I wanted to stay and purchase the new coloured vinyl of Two Piece Puzzle, and try to have a quick word with the band, which I duly did. Rosalie and Claudia, barely off stage and still clad in their gorgeous stage outfits, which my old ’70s era Sindy Dolls would have surely coveted, were delightful merch desk hosts, giving their time to chat and show great appreciation and gratitude to each person individually. Super-cheery, eyes sparkling, smiling broadly, they were rightly exhilarated! This is yet another great band of clearly lovely people, which seems to go hand in hand with creating equally gorgeous, intriguing, and intelligent music, as well as the ability to almost effortlessly reproduce it live – although it’s clear just how much hard work and talent is required to pull it off as fluently and as expertly as was shown tonight.

Rosalie Cunningham plus band continue touring in November 2022, with, according to her Facebook entry from a few months ago, a “folked-up, stripped back” gig in London on 27th November.

[All photos by Rosamund Tomlins.] 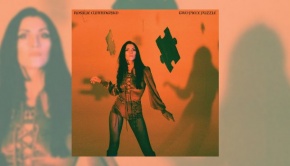 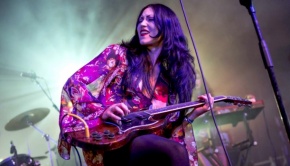 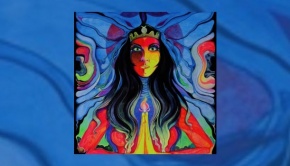