White Room, enveloped in the swirling lighting of the Cavern Club, provided good solid support, a blend of psychedelia and rock reminiscent of early Pink Floyd. Great bass player, and the others were none too bad either. They played a nice set, I didn’t recognise anything so I assume it was all original material. If they play around Exeter I wouldn’t say no to seeing them again.

Not knowing the other venues Purson have played on this tour, I can only describe The Cavern’s stage as a postage stamp compared to the space they had at HRH Prog in Pwllheli, where they had appeared as a late replacement for Curved Air (with two days notice Rosalie had told us), and they played a blinder. They more than filled the vacated Curved Air boots. I was enthralled, wandering around the auditorium taking photos and enjoying the sound they made.
 
So to the second time viewing in six days, not unprecedented but still impressive, and the band do not disappoint. I was entranced at HRH, and again in the close confines of this venue. The first song was DMT, this may be an abbreviation of Desire’s Magic Theatre which is the title of their soon to be released new album. Statements need to made about intent and, boy, do Purson make a statement. Rosalie Cunningham fronts the band and controls the stage effortlessly. I was so close, that Mr T would be nervous (that’s TPA’s Mr Trimming, not B A Baracas). Plenty of opportunity to photograph the band from the psychedelic attire of Rosalie, the white suited Sam, and George who was wearing the same shirt as at HRH, but sadly, my photographic skills in Exeter were below average, hence a couple of good shots from HRH.

DMT moved fluidly into Dance Macabre and then on to The Window Cleaner, the sound I think was better in the confines of The Cavern Club than at HRH; sharper sound, cleaner vocals, it was nice. Their first single was Rocking Horse, familiar to me from HRH; yes, only six days before, but there was a lot to take in and remember. There is a feel of the past about this band, but their music is rooted firmly in the present. Rosalie Cunningham formed Purson following the disbandment of her previous band Ipso Facto; the name Purson comes from one of the Kings of Hell, and she describes their sound as “vaudeville carny psych”. They have stage presence and there is more to them than comes through in Rosalie’s definition, with Black Sabbath riffs and some good harmonies. With a few awards to their name, they are a band to watch.
  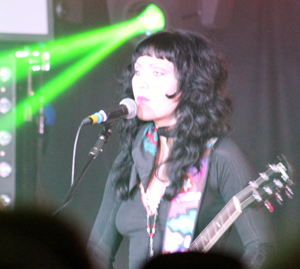 The set provides a mixture of older material from the first album, The Circle & The Blue Door, and newer from the forthcoming release. I picked up the In the Meantime EP but if their albums portray any of the energy shown on stage, they are well worth having. New songs Dead Dodo Down, Mr Howard and The Sky Parade reveal how well they can combine a rock edge with melody, all the elements of their musical performance are strong, from Raphael at the back on drums, Sam on keyboards, George and Justin on guitars and bass respectively, and last but not least Rosalie, who as well as being a great singer is an accomplished guitarist too. You do get a sense from watching that they really are enjoying what they are doing, I thought them good in Wales, in Exeter they were even better.

The tour continues, with their last U.K. date being on 15th April in Southend. After that they are off to the U.S., their first date there coinciding with the U.K. release of Desire’s Magic Theatre on 29th April.

Whilst I put their appeal in a broader spectrum you can find articles and further recommendations for them in Metal Hammer and Kerrang!