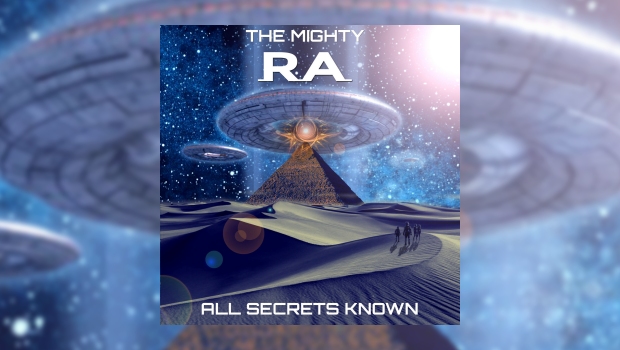 The Mighty Ra – All Secrets Known

All Secrets Known is a highly enjoyable debut album of melodic progressive rock from The Mighty Ra. This new band of consummate and experienced musicians from South Wales show a vibrancy and synergy between them that has allowed them to produce a diverse and complex selection of lyrically articulate and yet musically accessible tracks that both acknowledge their influences, and yet sounds fresh and original.

Coming together before the extended period of Covid-related lockdowns, The Mighty Ra have been waiting to release their debut album and perform live for some time now. Part of Rob Reed’s White Knight Records family, these talented musicians seem to have found a creative spark between them that promises great things to come.

Guitarist, vocalist and main songwriter Andy Edwards has a rich pedigree behind him, and as a former member of Ezra and The Fyreworks his links with Magenta’s Rob Reed go back many decades. He also played on some of the earlier Cyan albums as well as on the debut album of Last Flight to Pluto. Rob Griffiths on drums has played in a range of bands, including Cirrus and The Nick Ward Band, and was the initial instigator for The Mighty Ra coming together. Dave Rowe is an experienced bass player and singer/songwriter who has performed professionally in the Middle East, Australia, Asia and the UK and Europe over 35 years. Rob Wilsher on keyboards was the last one onboard, and he also has many years of live and studio recording experience in the UK and Europe, having toured with Magnum and Steve Harris’s British Lion, as well as being a founding member of Welsh neo-proggers Multi Story.

With this amount of experience and talent on show within mainstream classic rock and progressive rock, it is not too surprising that debut release All Secrets Known is a melodic progressive rock tour-de-force, worthy of as wide an audience as possible – and certainly beyond their native Wales. Over eight diverse and lively tracks, successfully recorded, mixed and mastered by Nick Lloyd at Oakwood Church Studios, the band clearly show their shared vision, love of playing, and even humour, making it, in my opinion, one of the best debut releases for some time in the melodic progressive rock genre. Dave Rowe’s impressive album design and art direction is certainly striking, and the quality of the music matches it perfectly.

The album kicks off in grandiose fashion with All Secrets Known, a song about ancient knowledge and secrets passed down from aliens to the Egyptians – with our protagonist wondering what he would be able to do if he had ultimate power. The warm, God-like tones of Les Penning provide the atmospheric spoken introduction over a background of Rob’s lush synthesisers, with Andy’s guitar joining in. A lovely, though slightly mysterious piano pattern welcomes in the vocals, and then Dave’s rumbling bass and Rob’s dynamic drums build up the strong structure.

Yet despite his vision that “Tyrants and despots would be no more. We would live in peace,” would there be a price for this, as he warns us, “So stand with me or fall.” A resonant guitar solo then leads to the climatic finale, where the rich ensemble playing and melody grow in power and complexity before a gentle, but slightly ominous conclusion.

Next up is a more traditional, commercial slice of melodic rock with Nothing Comes Too Easy, with Rob’s Magnum-like keyboard flourishes and chords complementing some nice guitar riffing and well-judged soloing from Andy. This exaltation to live in the present and enjoy the moment is delivered at an upbeat pace, with Dave’s Geddy Lee-like bass runs driving the track throughout.

The band have a nice thread of humour running through the start of Freedom. This western-inspired tale of a bandit on the run from justice has an atmospheric Ennio Morricone spaghetti western introduction (Liberta) full of whistles, chimes, jew’s harp, orchestral passages and operatic shouts. You can almost see Lee Van Cleef carrying his musical pocket watch down the dusty frontier street, with a ‘wah, wah, wah’ vocal echoing away and anticipating the powerful guitar entry into the main theme of flight (La Fuga). After this, the track positively gallops away with Rob’s insistent drumming. Andy’s vocals have a confidence and assurance to them as he belts out;

“Free, I can get away
I can ride the trail for another day
The hangman’s noose will seem far away”

There is some inspired interplay between Rob’s expressive keyboards and Andy’s soaring guitar lines, whilst the catchy “Freedom” vocal refrain keeps pace – all frantically ending in a fateful church bell and jew’s harp twang. A truly cinematic journey.

The one track on the album that does not follow the melodic progressive rock template I normally favour is probably one of my favourite tracks. Will We Ever Know is a stunning piece of psychedelia and space rock – yet still in touch with the band’s signature sound. A Prometheus-inspired theme of human DNA manipulation by ancient aliens and ultimately a search into outer space for our creators as a cyborg race – it is quite an epic trip. Both musically and lyrically the song is heavily influenced by Gong, Steve Hillage, Hawkwind and early-period Pink Floyd. Dave’s dominant bass and Rob’s synthesised noodlings introduce Andy’s Astronomy Domine-style vocals and subtle, supporting guitar lines. The central chorus is ridiculously catchy and will remain in your head for ages. A driving Hawkwind-like riff follows and, not to be left out, Rob’s drums take on a Nick Mason Set the Controls for the Heart of the Sun rhythm before we sail into Gong’s whimsical Flying Teapot territory:

“On the good ship Battenberg, Captain Cake is who we serve
Orion’s Belt and Sirius B
The Mighty Ra in time for tea”

Andy delivers a cosmic closing guitar solo and the whole song has a marvellous groove that could have been extended beyond its eight-and-a-half minutes for me – I’d look forward to seeing this developing further in future live performances, perhaps.

Seven Days takes us back into classic melodic prog rock with a flowing rhythm, especially with Rob’s powerful drumming, and more examples of keyboards and guitars in tandem – but never overtly flashy or at the expense of the overall melodic structure of the song. Andy delivers a delightful closing electric guitar solo to round things off nicely. Andy told me that the lyrics were inspired by the theatrical scene in the film Time Bandits, where the dwarves are entertaining Napoleon. There is joviality coupled with that dark sense of impending doom as the battle approaches. There’s a show going on, but it is but a short respite to the war that is taking place all around. He is even able to get in a reference or two about Jimmy Saville and the closed nature of organisations like the BBC in the past. Heady, thoughtful stuff indeed.

Rising Tide begins with delicate acoustic guitar and piano, with a well-judged, gentler pace and lovely vocal harmonies. However, it steadily gains power and depth, with urgent drumming and bass and some fine guitar riffing over a dense keyboard wash, building to a fine crescendo. Concerning the 2004 tragedy of the Morecambe Bay cockle pickers, the lyrics are very poignant and the increasing sense of panic as the tide rises is mirrored by the music’s steady rise in intensity.

“Trying to escape from the rising tide.
Brothers and sisters are by my side
Senses tell me I’m out of time”

Rain is the shortest track but it rocks powerfully and melodically, with all the band contributing to the vigorous and forceful instrumentation and accessible riffing. Andy recalls a range of exciting and exotic life experiences in his lyrics, but then compares them to his feelings at the birth of his daughter. No quiet sentimentality here, this slab on mainstream classic rock drives home that sense of euphoria very effectively.

“So, I can’t begin to tell you
There’s nothing I can say
I can’t describe the feeling that I’m feeling
Seeing you today”

Time for the album’s epic track to close proceedings. Bigger Lie is a fitting way to finish, steeped in Pink Floyd influences. Dave’s heartfelt diatribe against organised religion, conformity and conspiracy theories is pure Roger Waters angst. The opening keyboard sounds and acoustic guitar hint at Shine On You Crazy Diamond and Dogs, the spoken extracts of conversation recall Dark Side of the Moon and Andy’s exquisite guitar playing is pure David Gilmour at times – as are his expressive vocals. It’s a wonderfully complex piece where each band member is allowed the time to have their moment in the sun, but without detriment to the group dynamics. Dark, brooding and yet spacious and compelling – both instrumentally and lyrically.

The Mighty Ra manage to pay homage to their prog heroes whilst adding their own twist, and there is no doubting the power of the closing repeated chant of “We need as bigger lie!”, which is no doubt bound to be spat out with suitable venom by band and audience in future live performances. A cathartic and satisfying end to a vibrant and fresh debut album indeed.

With All Secrets Known, The Mighty Ra have certainly hit the ground running with a hugely enjoyable debut release of quality melodic progressive rock that encapsulates the band’s musical experiences and influences, but also combines them into something fresh and exuberant. Lyrically strong and articulate, with confident vocals, guitars and keyboards complementing each other and yet delivering wonderful solos and progressive flights of fancy, all grounded firmly by an impressive and experienced rhythm section. Fans of melodic prog will find the album ticks all the right boxes and the music can be complex, melodic and yet accessible where necessary. Highly recommended!

A month after the release of debut album All Secrets Known, The Mighty Ra made their live debut at the Prog For Peart Festival in Abingdon, in the early afternoon Friday slot. Starting confidently with All Secrets Known, with Dave Rowe on bowed bass centre-stage and Andy Edwards on vocals and guitar, ably supported by Rob Wilsher on keyboards and Rob Griffiths on drums at the back, they soon had the early festival crowd fully engaged. 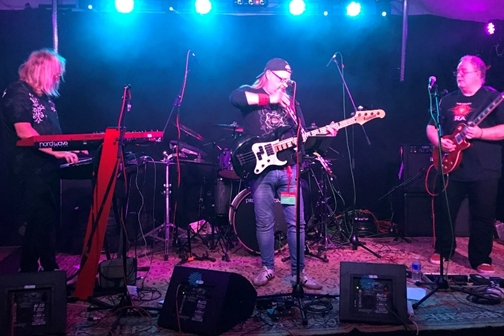 Nothing Comes Too Easy proved an accessible slice of melodic rock and the lively beat continued with Freedom, where the band built-up a head of steam, diving straight into the La Fuga section of the song. Powerful drums and bass complemented some really proggy flourishes from guitar and keyboards.

Seven Days and Rain went down well, as the band’s melodic prog rock drove home powerfully. Last up was the epic Bigger Lie, which proved to be the highlight of the set. Floydian in style – both from an instrumental perspective (particularly Andy’s guitar solos) and the Waters-style lyrical angst against organised religion. 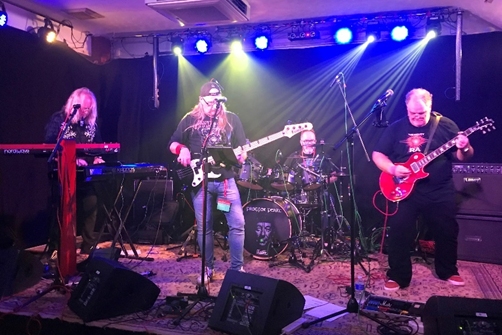 The short set was well-received and there was activity on the merchandise desk for the debut album. All in all, an assured live debut and hopefully the first of many more to come from this promising Welsh band. 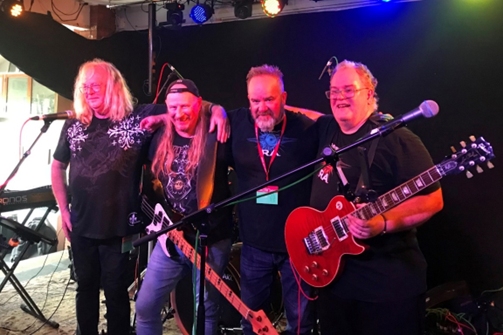 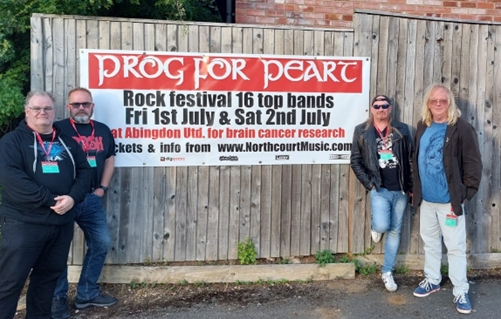