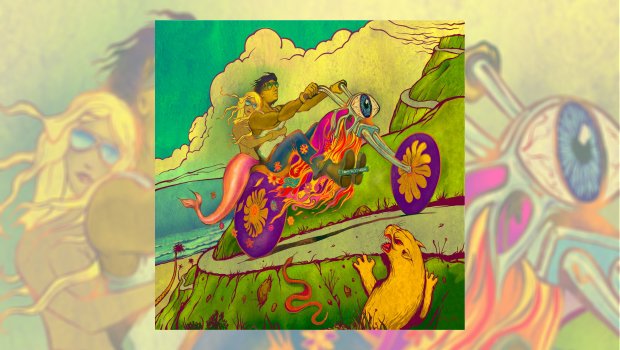 Gayle Ellett and The Electromags – Shiny Side Up

A chance exchange online about a year or so ago with Gayle Ellett revealed an excited guitarist mentioning his latest project, Gayle Ellett and The Electromags. It instantly sounded, from the name of the band, like a guitar album, and so enthused was Gayle that he shared a snippet of a work in progress track, which turns out to be the opening song on the finished album, Shiny Side Up. Whilst it was unfinished, what I heard sets the tone for the record; an authentic guitar album using vintage instruments, very few effects, and old tube amps. The result is something which sounds both modern, yet with a tone and feel that is rooted in the 1970s. He’s usually best known for his work in Djam Karet, a much more progressive rock ensemble who have been around for many years, or perhaps his more recent surf rock outfit Kelp Dwellers. Well, this is altogether different from either of those worthy bands, and I’ve a feeling that Ellett has had a hankering to make an album like this for some time. He clearly loves his guitars, and this is a guitar album through and through. Gayle is no shredder, however, and his style is as authentic as the equipment he employs, playing in fiery phrases with minimal effects pedals. It sounds so natural and real, it really is a joy to listen to.

Ellett has again hooked up with Craig Kahn on drums, who also plays with Kelp Dwellers, and has a robust but sympathetic style sounds perfect in The Electromags. The line-up is completed by Mark Cook on bass, who is obviously a very talented musician who adds so much to the overall texture, and this album is all about tone and texture. Add to this Ellett’s compositional style, which manifests itself in songs which never do quite what you expect, and are never the same throughout, and you have a very interesting creative combination of elements.

Ellett and Kahn both reside in that bohemian retreat Topanga Canyon, and much of the music conjures images that fit very much into that landscape, with motorbikes winding their way along canyon roads in the sunshine, guitars revving away though the hills or exploring the dusty trails. These images are captured perfectly on the album cover by artist Matt Mahurin, a legendary artist who has created artwork for numerous bands, and he has excelled himself with Shiny Side Up. No Deposit, No Return opens proceedings, and typically for Ellett, it sounds like about three songs in one, with time changes and atmospheric shifts betraying his progressive rock credentials whilst sounding a world away from Djam Karet. The overarching up-tempo feel gives plenty of room for full-throttle guitar soloing over driving drums and bass. Ellett has multitracked his guitars to give a full and rich sound, fully utilising the varying tones of each instrument. It’s as much about what he leaves out which impresses. The gaps between phrases and solos allow the songs to breathe, and that can be a rarity on modern guitar records. Past masters like Jeff Beck and Peter Green who understood when to leave notes out would approve. By the end of the song, it’s like you’ve been on an exhilarating ride – slightly scary in places, but you’d do it again in an instant.

Highway 27 is another road song, although nowhere near California, but we are back in the saddle and cruising through the ever changing landscape. The use of Rhodes electric piano adds a new texture, contrasting nicely with the fiery guitar solos and adding another layer of interest. Similarly, Ellett uses acoustic guitar picking on The Old Canyon Road to provide a different tone, combining beautifully with the electric work. On Southern Slide, Hammond organ does a similar job, and in this way each song has its own personality within the overall concept. The atmosphere The Electromags conjure reminds me very much of the first Hot Tuna album I ever heard, America’s Choice, except Shiny Side Up is purely instrumental, but the instrumentation and feel is very similar.

Hardtailed Knucklehead is another tour de force with side steps and many twists and turns to keep you on your toes through its five or six minute duration. Ellett again shows his dextrous picking style, Kahn clatters around his kit, and Cook plays some less obvious bass lines. There are several gear shifts and different riffs on display, and Hammond colouring all adding to a satisfying palette. Donuts and Fishtails has a great phased drum solo intro and outro, a very ’70s trick but a joy to hear, and when the bass and guitar kick in, it all sounds so right. We even get some wah wah pedal on this song, something Gayle uses very sparingly, preferring the natural tone of an unimpeded electric guitar.

Beyond the Milky Way is a solo piece of atmospheric guitar introspection, and shimmers beautifully like a desert sunset. It could have made a great closing track, but actually works better as a brief intermission. The actual final track is Trail Dust, and it’s the perfect ending. It starts much as many of the songs here, with a sprightly trot along the canyon, but soon dissolves into a wonderfully atmospheric slow bluesy segment with some gorgeously plaintive guitar work which gradually fades away like the dying sun. My only complaint is it could have carried on longer!

So, a fantastic old-fashioned guitar album with integrity and authenticity stamped right through it. The concept behind the band is simple, but the execution is anything but, with songs taking unexpected diversions at regular intervals. The playing from Ellett and his Electromags is exemplary, and the feel and tone is real. If you remember falling in love with the sound and excitement of an electric guitar, listen to this and do it all over again.