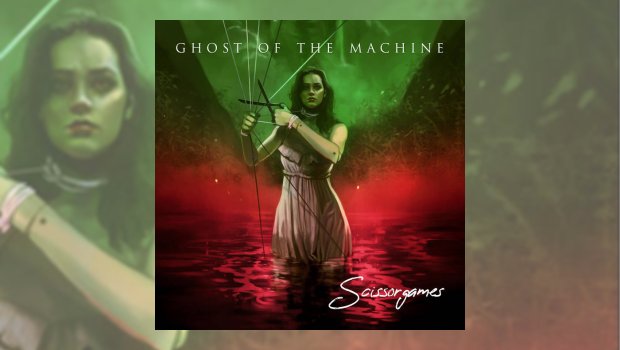 Ghost Of The Machine – Scissorgames

The first album from a brand new band, particularly one that chooses the rarefied pastures of prog to sew their seeds, is always going to be a defining one, and for the relatively small (but perfectly formed) audience, it is often a case of finding the time to even listen to, let alone discover new music – so many bands, so few fans. This band, however, is only 20% ‘new’, the other 80% having migrated ‘en masse’ from another relatively new outfit. Having nailed their colours to the mast with the band name, I hoped that there would be more substance than the name perhaps suggests.

The word ‘ghost’ is taken from the Old English word ‘G’Ast’, derived from the Germanic and meaning the ‘spirit’ or the ‘soul’. Certainly, the spirit and soul of these five ex-This Winter Machine musicians, augmented by the vocal prowess of one Charlie Bramald, is captured in this album. Mr Bramald also adds haunting flute playing that leaves me wanting more. Such beauty and talent needs to be further extended in the next album (and maybe we will be treated to more in the live performances?). This instrumental prowess adds to what is already new and fresh and sets this album apart from anything that has gone before.

Freed from previous compositional constraints, the true spirit of these unfettered souls manifests itself in Scissorgames, and rising star vocalist Charlie certainly stamps that new identity well and truly.

Bramald’s vocals are distinctive, and given that his previous experience was constrained to the odd pub gig with his band Harmony Spheres, his strength here draws comparison to more well known vocalists, such as Peter Nicholls (IQ), Joe Cairney (Comedy of Errors), early Fish (Marillion) and a nod towards accomplished Australia singer Mark ‘Truey’ Trueack (Unitopia, United Progress Fraternity) – a ‘Trueack-Lite’ if you will!

Okay, comparisons over, this album needs reviewing on its own merits.

It begins with a 17-minute epic entitled Scissors, made up of no less than six separate elements, fused together in true prog style. It truly showcases the individual and collective talents of the band, with Mark Hagan’s arena-worthy keyboard entrance opening setting the scene for the rest of the track. I hear echoes of Pink Floyd, Marillion, Mostly Autumn and IQ, although these are perceptions to signpost the direction of travel rather than an outright mimicking of style.

This is a classic tale of domination, egotism, the quest for freedom, a fear to make the leap, the soaring hearts of freedom, and a belief in hope against the odds. Go figure!

The more this track is played, the greater it becomes. The artistry of Graham Garbett’s guitar, supported by Scott Owens’ power chords, is sewn seamlessly together with the synth and keys of Mark Hagan whilst, in the engine room, Stuart McAuley (bass) and Andy Milner (drums) change gear effortlessly to suit the mood as the track waxes and wanes.

The album runs the gamut of human emotions, and even those of gods and mythical creatures; the highs and lows, the agonising of choices at the crossroads, the things that makes us different, the way our conscious mind battles constantly with the questioning doubts.

Like all good music, there are some elements that grab your ears on the first listen, like Mountain’s classic ’80s arena rock led by Hagan’s towering keyboards, with gutsy bass lines from McAuley and melodious power driving all before it. It’s the tale of someone who thought their love could move mountains, but in the end that love is unrequited; an impossible task despite the anguish conveyed by Bramald.

Then you have the galloping fable that is Mercury Rising, another melodic track exploring yet more aspects of ‘love conquers all’ (or does it?!), but this time harking back to darker tales of legendary creatures passed down from generation to generation. Mystical keyboards develop into a driving power house of guitars and drums. I love the bass on this track, you notice its presence in a very positive way; it sits right where it should be!

There follows a slower paced interlude, with lyrics woven and intertwined, before a much harder hitting riff ensues – once unleashed, the song gallops along in fifth gear, with some great drumming from Milner, synth joining in with some pace too. The track ends suddenly with drums and guitar signing off quickly. This is very much of the ‘melodic prog’ genre, a path well-trodden by many, but it’s outstanding nevertheless.

I do not know any background to this track, but I sense there is a battle ensuing between the innocence of a pure daughter of the river and the poison brought to bear upon her. She is caught between ‘metal and fire’ – is there any way to choose? The girl of the river sees a snake, yet is charmed by a silver tongue! A little research reveals that the girl of the river, ‘Larunda’, is fascinated by what is offered to her, an escape from a half-life, where Mercury and the pureness of water can live together.
Larunda has no voice, stolen by the thunder (a god maybe?), but is discovered to be a Naiad nymph, daughter of the river Almo in Ovid’s Fasti. Not your standard ‘boy meets girl’ scenario by any stretch of the imagination, but that’s prog for you!

Other tracks, such as Just For Reference and January’s Child, take more collective listens to draw you in; the former is a much softer tale, with a beautiful opening that brings to mind the quieter side of a certain John Mitchell (It Bites, Kino, Arena, Lonely Robot) and is probably the most laid-back track on the album. A tale of anguish, despair and disbelief, all tempered with a fragment of hope that must be painfully magnified in order to break free. The emotion grows in this song as it progresses. Gentle, soft vocals alongside a guiding guitar riff that brings to mind the swinging pendulum on a clock.

January’s Child is a conundrum for this reviewer. Despite thundering in from the get go, and yet with probably the catchiest riff on the whole album, it then marries lyrics and music in a fashion that is jarring to these ears, and the hard-hitting words of the story are at odds with the uplifting music (a style of composition that was utilised some time ago by a gentleman by the name of Morrissey, for those young enough to remember of course…). Oh well, perhaps I will change my mind in time, but I was/am easily distracted by this track.

Dead To Me, penned by the talented Graham Garbett, is the softest song on the album, with some beautiful guitar work (natch!) and some sombre keyboards from Hagan; here Bramald’s vocals sit mainly in the lower register and make a fine foil to the tenor voice that he employs on the other tracks. A soft yet powerful song about finally having the strength and energy to break free, whatever the ensuing outcome (it cannot be any worse than the status quo). A track that haunts me long after it finishes.

The album closes with a return to Scissors with a reprise, this quieter conclusion seemingly drifting to a close before suddenly exploding into life as the ‘leap of faith’ towards freedom feels totally exonerated, despite the pain inflicted and received. The song celebrates this, driving towards a powerful rock ending.

For this reviewer, the balance and blend of the various musical talents in this band is what stands out, and the mixing of the tracks is of a high standard indeed (take a bow Bob Cooper!). Live exposure to many potential fans, old and new, is the oxygen this band craves and deserves, and I hope that people take a chance to go and see them perform.

All in all, a positive debut from this new band, and it will be very interesting to see where the second album will draw its inspiration from, given the cathartic release that Scissorgames engenders.

I think this verse taken from the final track, for me, sums up the journey and the future for this band:

“Cry for victory, we are free from the years of tyranny,
The war of life is won, after all is said and done,
Armed with what we learned, we lay down all our burdens,
Ignite the fuse and blast across the universe”

Tags: Ghost of The Machine