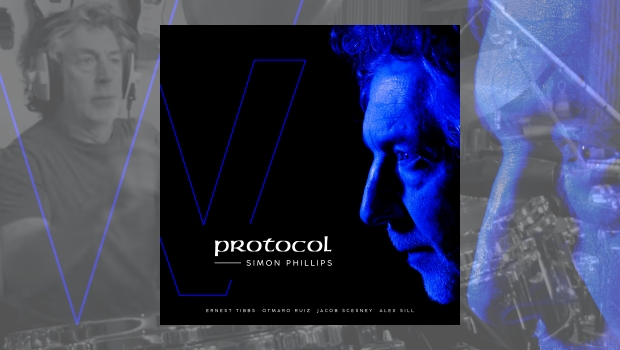 Simon Phillips, the esteemed and world-renowned drummer, percussionist, producer, and songwriter, has created a worthy successor to the protocol line-up, a lineage that began with the first Protocol album in 1989.

Protocol V is a smorgasbord of superbly produced fusion, with stellar musicians, each contributing their individual talents to the overall album. It is not one musician, or for that matter, instrument that makes this release phenomenal, but the total sum of all parts. Ernst Tibbs (bass) has been with Phillips since 2013, but the others, Otmaro Ruiz (keyboards), Alex Sill (guitar) and Jacob Scesney (sax) appear for the first time. Their contributions overall make Protocol V a smashing album. This seven-song release clocks in at just under 53 minutes and fits snugly into the pantheon of its predecessors.

Phillips, whose protean output of work, both live and in studio is well known inside the music industry (his website lists bands and artists from the entire spectrum of the music world he worked with over the past 50 years, including Jeff Beck, Nik Kershaw, Mike Rutherford, The Who, 10CC, Judas Priest, Mike Oldfield and, of course, Toto, filling in for another legend, Jeff Pocaro who sadly died too soon). There are others he played with over the decades, but the point is, Phillips continues to be highly sought after for his work, regardless of musical genre, and highly praised as one of the best musicians on the planet.

Protocol V opens with Jagannath (meaning ‘Lord of the Universe’ in Sanskrit, a derivative of which is the English word ‘Juggernaut’), a very proggy opening with a sublime synthesiser that lunges into a furious pulsating rhythm and drive that sets the tone for this tune and the rest of the album. From the layered patterns set by Phillips on drums and Ernest Tibbs on bass to the utterly glorious guitar work of Alex Sill and sensational sax playing provided by Jacob Scesney, the tune comes to its crescendo with the gorgeous keyboard playing of Otmaro Ruiz. This opening track is quite intense and highlights the magnificent playing of all involved.

The second track, Isosceles, is a Tibbs-led bass groove that hammers with a pulsating drive and crushing intensity, progressing with the addition of Sill’s intricate guitar playing. The combination of the bass and electric guitar would be enough to keep and sustain the momentum here, but the addition of Scesney’s sax provides another layer of texture and groove that proves to be simply infectious and utterly exhilarating. Switching gears, the album’s third track, Nyanga, brilliantly lowers the heat and introduces the listener to the sumptuous world of Africa and a slow easy rhythmic beat that reminds this reviewer of an enchanting world of rich bright colours and textures, full of history and mystery. There is vitality captured through the sax playing of Scesney. The absolutely stunning keyboards guide the music and Sill’s gentle guitar playing transcends the listener to another world. I found this also to be a very sensual and vivid track.

Following Nyanga, the fourth and fifth tracks, Undeviginti (meaning ‘One from Twenty’) and When the Cat’s Away, are both examples of unabashed, and devastating groove and funk that are unleashed on the listener. The beginning riff of Undeviginti reminded of me of Stevie Wonder’s Superstition, which was magnificent! The strength of the track rides on the superb tandem playing of Sill and Scesney with Phillips priming rhythm. Sills shines on this track as his playing provides intricacy and balance. When the Cat’s Away brings Tibbs’ bass to the forefront and tastefully allows Scesney’s sax to take control. Here again, Phillips’ drums provide the environment in which the others can shine. Both tracks are strong and expressive with bold individual signatures, overall incredible playing, and showmanship. These two tracks highlight Phillips strong love of jazz fusion and are, to this reviewer, a hell of a lot of fun!

Dark Star opens with subtle piano and then Sill’s intricate guitar building up slowly with Phillips’ gentle cadence. A dramatic shift with a whiff of sadness, the listener is enveloped by atmospheric sax work from Scesney, whose alto sax sounds like a clarinet, brilliantly conveying a sense of longing and loss. The closing minutes of sublime keyboards paint a rich and intricate tapestry.

The final track on Protocol V is The Long Road Home and it is the keystone of the album. It is unequivocally magnificent. Sill’s brilliant guitar playing from the opening notes to the sublime ending; Phillips superb drumming enhancing the sensation of pace, drive and focus; Tibbs, Scesney and Ruiz bringing a sense of energy and movement and then closure to the track and ultimately the album. The last 30-seconds of this track are brilliant, leaving this reviewer wanting more, even though the track is eleven-and-a-half minutes long – the longest on the album.

One of the things I noticed after playing this album over and over for the past several weeks, discovering so many nuances and hearing such exquisitely produced sounds, is that Phillips’ drumming should not be viewed as the centrepiece of the album. Phillips is the leader and point man, but not necessarily the star of the production. The drumming on Protocol V is the canvas on which the rest of the band creates the magic. And what magic it is! The addition of Ruiz, Sill and Scesney from the previous Protocol line-ups is fantastic and adds to the incredible musical legacy that is Protocol. The overall engineering and production on this album are second to none.