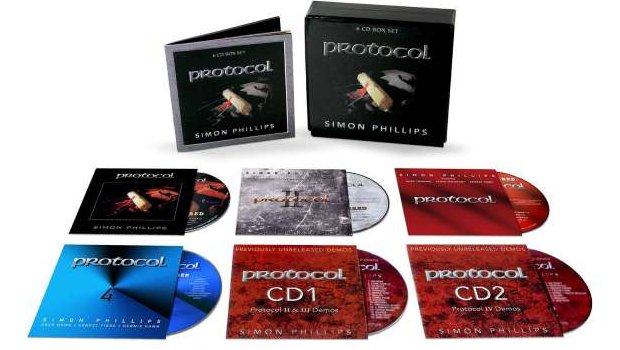 In my previous review (HERE), I covered the first three CDs of this six-CD box set of the complete works of Simon Phillips’ Protocol project. This review will conclude that set with my reviews of disc four – Protocol 4 – and discs five and six, which feature demo versions of tracks that appeared on Protocol 2, 3 and 4, plus various unused or unreleased tracks.

The first thing to note is that on Protocol 4 the line-up has changed significantly, in that both Andy Timmons and Steve Weingart have departed, the latter replaced by the return of Dennis Hamm to the keyboard role with American guitarist Greg Howe, from the Shrapnel/Mike Varney school of players in the mid 1980s, also coming aboard. Howe has played with Ritchie Kotzen, Michael Jackson and many others over the years.

Right from the off you notice a subtle change in that the guitar work is even more fiery and pronounced, but does not overpower the music at all. Once again the sound is very lush and full with great separation between the instruments, although the bass is a bit low in the mix. Simon’s drums are clearly present but again they are not the prime focus of the overall sound. This group approach and sound is very refreshing, Simon doesn’t need to prove anything and this is clear from how these albums sound. It is very pleasing to hear that there are no egos at large, unchecked or demanding the spotlight, and that this is a case of the parts not exceeding the sum as it were. Refreshing and it makes for a harmonious approach.

The album opens with Nimbus, harmonic tones from Greg’s guitar and percussion from Simon with bass in support for the first 90 seconds before Greg unleashes a fluid melody line that sets a groove for all to follow. A sweet, tasty groove it is to, with a meaty riff emerging at two-and-a-half minutes, with drum emphasis at 3-minutes over Dennis Hamm’s keyboards/synths, before a delicate jazzy solo from Howe. This is some serious fusion, a great opener that bodes well for the rest of the album.

Pentangle is a rhythmic little mid-length number (6:46) that opens with a good guitar riff and the chance for some fluid playing from the whole band. The mid-section has good keyboards from Dennis with his synth again, all very tasteful and energetic. These numbers certainly have drive, all a real joy to hear, music without agenda (sounds like a good album title).

Next is the raga sounding Passage to Agra. Here Simon’s drums and Dennis’ keyboards create an Indian-sounding opening section. Greg’s fluid guitar line is introduced, sweet-sounding with a backdrop of syncopated drums and swirling keyboards, all very ethnic sounding, whether Simon is playing any Indian percussion I don’t know as I don’t have the booklet for these albums, but I suspect he is in an expressive tonal track. A very enjoyable 7-minutes of great music.

Solitaire is a funk-based number with a chunky riff using wah-wah guitar and staccato keyboards. This is another good track, the band can certainly cook these rhythms. Following this is a short but atmospherically charged piece that shows the fine keyboards of Dennis and a very fluid guitar line from Greg that soars above to great effect. Short but oh so sweet.

Next is Celtic Run, which doesn’t sound at all Celtic, more’s the pity. This is another great workout for Dennis and Greg, with Dennis’ synths taking centre stage before yielding the stage for a fiery burst from Greg’s ever-fluid guitar, before all commence on a fairly brutal riff section. Returning to the original opening riff, this is a very good piece indeed with some highly imaginative and charged playing from all parties, a tonic for the ears. Then we are onto, all things considered, a somewhat shorter track, but no less interesting as it has a sinewy riff that twists as it plays out.

Disc 5 features tracks that formed the basis for the Protocol 2 and 3 albums, along with some previously unissued tracks. These are generally shorter sketches rather than finished works, but even in their abridged versions they still show plenty of promise. Of particular note are the tracks Six Eight, Thirteen, Zawinul and Mystery, all of which are slightly more finished, showing great rhythms and with plenty of interest. Again the production values are absolutely first class, you would not think these were demos at all, such is the attention to detail and fine engineering. The music is generally fairly fiery jazz-rock fusion with great performances from all parties, and I am put in mind of latterday Weather Report on these tracks, no bad inspiration to have!

Disc 6 is the shortest of all the CDs and hosts demos and sketches for what became Protocol 4. It features a longer version of Six Eight and also different version of Pentangle, Indian Theme and Celtic Boogie, these are not that different to the album versions but do show how the sound was progressed, Celtic Boogie becoming Celtic Run on Protocol 4. The original version is, in my opinion, far superior with a longer running time. The bass is more prominent here making for a great track, and this take on Pentangle also features a fine bass solo segment. In fact, this whole CD is really very fine indeed, good pieces, fine playing and top-notch production all making it less a collection of demos and more a cohesive alternative look at a great fusion album.

I really like this box set, it has some fabulous music, for those who like the jazzier fusion style, and there is much to explore and to enjoy herein. I recommend this very highly indeed.

[The first three discs of this set are covered HERE.]