The discussions about which bands have the greatest influence on progressive rock music always seems to throw up the same five bands, but in my opinion Gentle Giant should always be included. They were a band unafraid to push boundaries within their musical vision, providing music of a sustained quality throughout all of their albums, combining diverse elements of rock, jazz, classical, blues, soul and avant-garde. Now following on from the success and positive response of the huge 30-CD Unburied Treasure box set, fans expressed interest in vinyl releases, and it was decided to release the first four studio albums on vinyl. 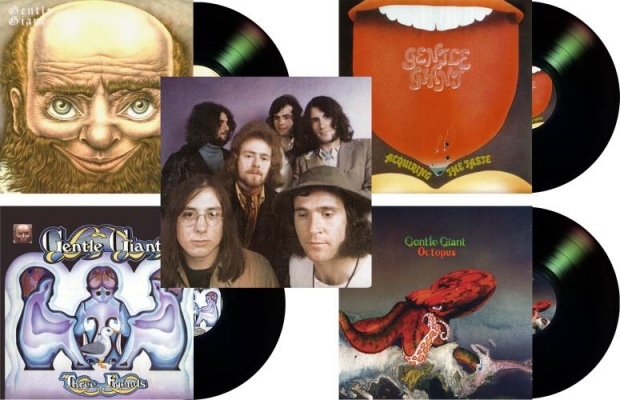 That is what we have here, the albums mastered from the original 1/4” flat mastered analogue tapes, not remastered or tweaked from original pressings. It was decided that they should be as authentic as possible, good or bad, presented as they were in the Seventies. Now there is an exception to this as according to the sleeve notes this does not apply to Octopus as it appears that the recent Steven Wilson mix has been used, although after further research I have found a statement at Burning Shed that says these vinyl 2020 releases do not use any of the Steven Wilson mixes. How has this confusion arisen? Well, apologies go out to the fans confused by the text on the inner sleeve of Octopus, unfortunately the label copied text from the CD version and accidentally forgot to remove the reference to Steven Wilson. He was not involved in this version at all. I hope that clears things up as we do have the original pressing sounds of Octopus here.

The albums have beautifully restored and detailed artwork on all the sleeves and are pressed on 180g vinyl. The originals were on the Vertigo label, but these do not have the classic Vertigo swirl at the centre, it has been replaced by the album cover image on the A side with track listings on the B side. Each album’s inner gatefold sleeve has lyrics, band members and instruments played, plus various other bits of information, all going to make a very nice package.

As for the sound quality, Ray Shulman has said, “The tapes used were the original quarter inch masters from Phonogram/Universal archive. They were digitised at 24bit/192khz from a Studer A80 tape machine. Tape machine line up and bias settings are critical in faithfully reproducing the masters, so we thought it best to send digital files, that we know were correctly transferred, to the cutting room. That way we didn’t have to rely on unknown inferior tape machines.” Well that is the technical detail, but how do these editions sound? In my opinion an excellent job has been done and the sound quality is top notch to my ears.

One of the other more noticeable things is the preservation of the Seventies new found use of the stereo format, separation of instrument is clear and precise, for example, you may get vocals from the right speaker only and drums from the left. This effect is very useful for Gentle Giant’s music as it helps to identify the many separate intricate instruments they used and the nice vocal harmonies in a clear and uncluttered way. It is an effect I always liked and is certainly reminiscent of releases of that decade.

Gentle Giant is the band’s self-titled debut, appearing in 1970 with, as was normal at the time, a running time of around thirty-six minutes, containing seven tracks which fitted the vinyl format. This album is a more straight forward release than the more intricate albums that follow, that said it does show the way they were going to develop. It contains two songs popular with fans, Funny Ways and Alucard. The sound quality is excellent, there is clear separation between the instruments and Derek Shulman’s voice is prominent, but not overly dominant. As expected at the time of the original release, there is clear and noticeable stereo separation, and along with notable performances and songwriting it all goes a long way to make this an interesting and enjoyable release.

Acquiring the Taste, their second album, demonstrates clearly the bands forward momentum, becoming more adventurous with songs which have a more complex structure. Nowhere is this more clear than the opening track, Pantagruel’s Nativity where they expand their ideas over six wonderful minutes. This album is full of tracks which shows a band enjoying themselves and stretching out. Side B has a favourite track of mine, Wreck, at times it has an almost sea shanty rhythm, but careful listening offers so much more. The seven tracks contained here again have an excellent quality to the sound, with great production by Tony Visconti.

For their third album, Gentle Giant went for a concept piece titled Three Friends. The sleeve notes offer an explanation of how this came about; “Idea for this album came about from normal conversations within the group. The theme of this album is based on three people – friends at school but inevitably separated by chance, skill and fate”. There is the first change in the line-up here, Martin Smith being replaced by Malcolm Mortimore on drums. From the opening song, Prologue, right through to the final track Three Fiends, we are treated to an album of quality and continual development, and again the sound quality is excellent. This album is often overlooked, which is a shame as there is so much to enjoy here, but this may be due to the success of two albums that followed, Octopus and The Power and the Glory.

Now to their most successful release of the four, Octopus. Debate rages amongst fans whether this or The Power and the Glory is their pinnacle album, for me this does not matter as I feel all their albums stand out for different reasons. The sound quality again is crisp and precise, and this version does sound different from the Steven Wilson mix, which I have a copy of. To court controversy and no doubt upset some, I personally prefer the original version, despite the fact there does not appear to be any widely different sounds to my ageing ears. That said, the original has the edge for me. There was another band member change on this album, Malcolm Mortimore had been replaced on drums by John Weathers.

These vinyl releases give a clearer listening experience of what these albums must have sounded like in the Seventies. The debate of what is the best format in which to listen to music should not be an issue or discussed with these releases. The main point should be that these albums are released in this format for fans to enjoy them as they were originally presented, all those years ago. The music still has that fascinating and almost timeless ability to challenge new listeners to enter the magnificent world that was Gentle Giant, and to hear it in the same way as fans of the formative years did. A lovely set of albums that would grace any vinyl collection, I know they do mine.