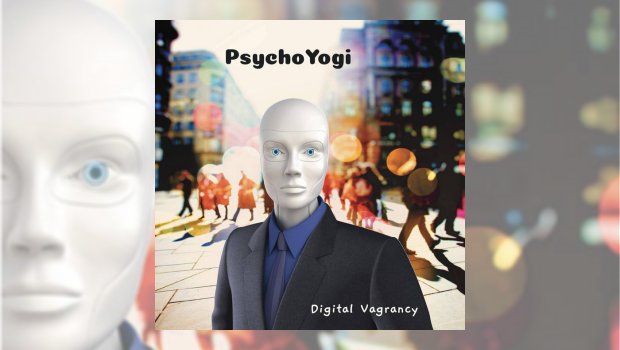 I have reviewed PsychoYogi albums before, most recently their last album, Dangerous Devices. I was delighted to hear that they were issuing their latest album on Bad Elephant, a label who have put out a ton of great music, and I am hoping that this development brings them to a wider audience. PsychoYogi have been issuing great albums for almost 30 years, a major achievement in itself for any band, especially one who manage to present such artistic integrity and strength of vision over such a long period.

For this album, the overall impression compared to some of their previous releases appears to be a slightly more stripped down feel, with an overall jazzier vibe to my ears and sensibilities. I note that there is one less member appearing in comparison with Dangerous Devices (sax player John MacNaughton not featuring this time). I can’t quite put my finger on the change exactly, certainly not a negative development, and potentially more to do with production values than anything else. I haven’t found this album to be quite as immediate as some of their previous efforts perhaps, but something always draws me back for a further listen, and I have to say that although it may have taken a few more spins than some of their previous albums, I have still ended up in the same place of love and respect for this great band. Sometimes the growers end up being the best, right?

As with all PsychoYogi releases, in my perception the lyrics form an integral part of the overarching artistic vision, poetic lines often searing and challenging at one stroke. The resultant impression in terms of the lyrical imagery is of a recognition of the often grim nature of the modern world, and hence essentially grounded in the reality of modernity, whilst never losing sight of the potential for positive change, presenting a balanced yet optimistic potential vision of the future. Nevertheless, there’s the ever present caveat that anything could go off the rails at any moment, as I think recent world events have most certainly demonstrated. The music seems to perfectly reflect this equilibrious yet mercurial and unpredictable equation, with its ever shifting motifs intertwining and enchanting, drawing the listener in, fascinating and confounding, often simultaneously.

The personnel are well tried and tested, with Chris Ramsing on guitar and vocals, Justin Casey on drums and percussion, Izzy Stylish on bass and Toby Nowell on trumpet and saxes.

The album kicks off with Guiding Light, with its lilting lugubrious rhythm, swaying and ushering the listener in to the PsychoYogi world in fine fashion. The slightly somehow sombre rhythm soon gives way to a lighter refrain, presenting a counterbalance to the lugubriousness like the lighter side of the same musical coin, the music reflecting the lyrical lines of hope for a more positive future. The sprightly tone of Chris Ramsing’s guitar lines underline the positivity. The whole is beautifully punctuated by stippled stabs of soprano sax, the rhythm section holding together the whole in unison, as the composition lurches and waddles majestically, engaging the listener throughout, and concluding pensively and perhaps self-questioningly.

Next, A Dangerous Path, with its loping, sidestepping bassline, is full of eccentric whimsy, punctuated by almost klezmeresque horn work, and featuring some refrains which stay in the mind long after listening. Chris Ramsing’s vocal delivery style entertains and challenges in equal measure. It’s classic PsychoYogi style.

The River follows, seemingly more reflective, resonant of perhaps a Canterbury sensibility. Structurally the composition does appear to suggest a meandering waterway, constant and unending in flow, eventually relenting to the sea, as perhaps we all do eventually. Wonderful Place presents jazz infused guitar stylings with an almost eastern European vibe. The horns weave irresistibly, giving way to a beautiful guitar solo from Chris.

Following Distant Bell, a pleasant instrumental interlude, Salvation for me represents the most lyrically dense composition on the album, and probably my favourite track. The lyrics appear to reveal a view of religion as a construct to achieve social control. Structurally and compositionally, the complexity and intricacy has been masterfully crafted into a thoroughly engaging piece, full of intrigue and interest, standing repeated listens each of which reveal another compositional detail. Definitely a piece which engages further with each successive listen.

Some of these compositions will be familiar to long time PsychYogi fans. Love and Sanity originally appeared on Icon Tact, their 2003 album. The piece is well worthy of revisitation, and the version here is a joy. Lyrically, a snapshot of inner city solitude amongst the anonymity of the urban mass. Similarly, Poison Candy, formerly the title track of the 2004 PsychoYogi album, here features some deliciously intricate guitar and sax themes intertwining, before breaking into a fabulously spiky guitar solo. Lyrically, at the current moment in the world’s history, the theme of peace couldn’t possibly be more salient.

Elsewhere, Much to Dream About outlines a harking back to a time of imagined futures and idealism, reflecting on how far these visions may or may not have progressed. There are some entertaining compositional stabs and staccato rhythms, featuring some impressive work all round, including some wonderful trumpet parts. The excellent engaging structure, side-stepping between component structural elements, appear as a restless yet perfectly smooth whole. The listener is left stunned into submission through the repeated cleverly constructed refrains. This stuff can’t be easy to learn and play; they make it sound so effortless but beneath the swan’s majesty there is clearly some ferocious paddling.

For the last non-instrumental track of the album, Innocence for Fear, there is the sense that despite all the social commentary, agonising and yearning for better, we are all still here and we all have to live from day to day. The feel here is a little lighter perhaps than some of the other tracks on the album, suggesting the acknowledgement but not acceptance of the insanity of the world with genuine good grace and humour. A song of survival through the confusion of daily life.

Long Goodbye and Frank end the album in instrumental style, the former reminding me somehow of the excellent nineties and noughties band Forever Einstein, and the latter a lovely solo guitar instrumental.

All in all, PsychoYogi deserve to be proud of this album, which as I say, I hope widens their audience. The world needs bands as inventive, original, entertaining and challenging as this, and PsychoYogi have proved themselves both resilient and consistent in delivering the musical goods. 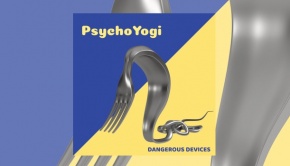