Trophy Husband — What Would You Like For Dinner? [EP]
Bob Mulvey 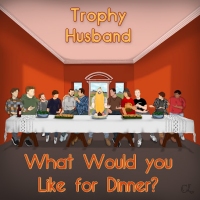 Great band, and love the EP, but let’s get the elephant in the room out the way first: the bloody awful name! I know I could have, and I know I should have asked, but I didn’t! So my initial internet search enlightened me to the sad world of trophy husbands, numerous dreadful bands of the same name, and a wasted half-an-hour listening to another US based ‘TH’ band, time I will never get back and music I can never un-listen too. In fairness to the band, they did send links to TikTok, Spotify, Deezer and Instagram – but being an old curmudgeon, I don’t subscribe to ’em.

Let the review begin. This Trophy Husband appears to revolve around bassist Max Kozol, with Donny DeFala (Bananaman) on guitar, along with a fluid (or perhaps just not settled as yet) membership on kit and sax. This information I’ve gleaned from the live videos on YouTube. What also seems obvious from the live footage is that these guys are young, but the quality of music and composition on this first outing defies their age. Instrumentally, What Would You Like For Dinner? is upbeat, in a sort of commercial jazz fusion style, with great funky grooves, oozing with catchy melodies and neat, concise solos. Initially the splendid Thank You Scientist sprang to mind, certainly with the tight interaction between the guitar and sax, which extends into the cohesiveness of the rhythm section, although Max Kozol is stylistically different to TYS’ Cody McCorry.

The EP clocks in at a tad over thirteen minutes, and although the five tracks are brief they amply show the potential for a great full-length album at some point. The two minute title track opens, with hints to ’70s soul/funk amongst others. The driving bass knits well with the drums, big brass and choppy guitar. I also gather the band have a sense of humour, the EP cover and the track names are a bit of a giveaway, as are the false stops and the tongue-in-cheek ending on track one. The up tempo Super Salad continues to impress, whilst Eggplant Parmesan brings a bluesier feel to proceedings and features some fine slap bass from Max. Which all too soon brings us to the EP close out tune, the twisting Banana Split, complete with brief drum solo. However, it’s not over ’til the fat lady sings, as the saying goes, and there’s thirty-five seconds of music remaining, and Compliments to the Chef demonstrates another intriguing side to the band.

This isn’t the finished article, but it sure is a tantalising appetiser. Enough of the punning! Can’t wait for the main and then there’s dessert 😉 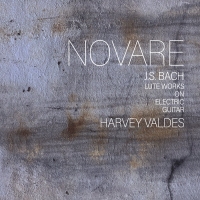 Novare from the Latin ‘to make new’, and it is exactly what it says on the tin, with Harvey Valdes tackling the lute works of J​.​S. Bach on electric guitar. Now the electric guitar and Bach have become firm friends over the last half-century, so a little caution was required before taking on this album, fortunately there is a video which immediately dispels any such apprehensions. The album opens with the four movements from Bach’s Lute Suite in C Minor (BWV 997): Preludio, Fuga, Sarabande, Gigue with Double. Interestingly, Double is not considered to be part of the original suite as the note range is beyond the dynamic range of the lute and it is believed that Double was written later and for the lute-harpsichord (Lautenwerck). Anyway, the album opens with Prelude (Preludio) which is featured in the aforementioned video (and below).

Perhaps more synonymous with the classical guitar in the 20th and 21st Centuries, however Harvey Valdes performs the pieces on his six-string Teuffel Tesla electric guitar. Thanks to my father I had grown up with Julian Bream’s performances on both lute and classical guitar, so I was intrigued to hear what Harvey’s electric guitar interpretations might sound like. First thing to note is he has transposed all the pieces, as to why is not indicated. Secondly, his renditions call upon his jazz and improvisational skills, offering subtle nuances to the original scores. And finally the electric guitar offers contrasting sonic variations, and the end result is a rather intriguing and contemporary presentation of J​.​S. Bach’s lute works.

Before concluding, and during the research for this review I took the opportunity to investigate other releases from Harvey Valdes. Roundabout released in 2015 features nine engaging reinterpreted improvs of classic tunes from Dave Brubeck to Irving Berlin and Jerome Kern to Miles Davis. 2019 sees a sonically similar release, Solitude Intones Its Echo, and on this occasion eighteen self-penned tunes released during the Lockdown. However, the PointCounterPoint project, featuring Harvey Valdes (guitar), Sana Nagano (violin) and Joe Hertenstein (drums), is a whole different voyage of discovery. An engrossing if somewhat intense journey described as “rhythmically driven, countrapuntal action that draws from metal, jazz, atonality, noise and more.” Wonderful stuff – Mahavishnu on steroids… 😉 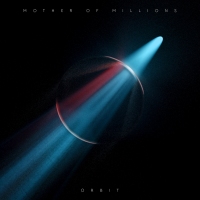 Orbit is the forthcoming EP by the Greek progressive metal band Mothers of Millions, aimed at filling the gap between Artifacts, their third album, and their fourth currently being recorded. The EP is dedicated to Makis Tsamkosoglou, their keyboard player and founding member, who tragically passed away on stage in June 2019 while promoting the Artifacts album. As to be expected, there has been a lot of soul searching, reflection, and emotions on a razor’s edge. Orbit‘s four tracks present the new face of MofM as the remaining members look to continue.

The EP opens with Where Do We Go From Here, with elements of Greek cohorts Verbal Delirium and British progressive crossovers Muse. The title track expands the landscape – the music of a band passing through tragedy and still growing, whereas No Light, No Light highlights the pain they must have felt, which is almost palpable but shouts a determination to continue. The closing track is Rome, performed on piano with harmonised vocals. Recording it was described by the band as a necessary healing experience for the restart process. It is beautifully done, and a fine memorial to Makis.

Orbit is scheduled for release on 6th May 2022 on the ViciSolum Productions label. Until then I will be exploring their back catalogue… 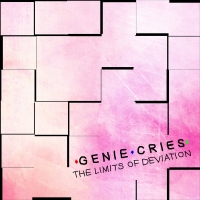 The Gordon brothers, Ian, Neil and Gary are the constituent parts of UK based trio Genie Cries, and The Limits of Deviation is their debut album, independently released in January of this year. All three siblings are seasoned and accomplished musicians, something they amply display across the album’s nine tracks. Other than that there’s very little I can tell you about the men behind Genie Cries, although a bit of digging reveals Ian Gordon has released numerous sci-fi, fantasy, horror audiobooks and I stumbled across Ian a few years back on an EP, Departure, with vocalist Jennifer Gill. Catchy techno-synth tracks as memory serves…

And catchy is something that is abundant across The Limits of Deviation, whether it be the infectious vocal melodies and harmonies, or the mellifluous guitar or tuneful keys and synths. A prime example is the second track, Sink, my introduction to the music, and one which haunted me for days after hearing it. There’s a familiarity about the song that simply lodged itself, compelling me to return. Was it the hints towards Kansas or even David Bowie? Eventually the penny dropped and put me out of my misery. Sink also reminded me of Sweden’s A.C.T, who were very adept at combining muscular guitar riffs into their ear-friendly songs. Along with the aforementioned knack of writing a strong tune is the compelling lyrical content which adds a further dimension to the tracks. “The album is an experiment in rock, exploring a broad range of concepts, from a vampiric visitation in the middle of the night, to a pink palace conquered by an 8-bit video game protagonist.” Take a listen to Sink featuring Nosferatu…

From the kicking opener Stand Your Ground to the concluding ballad Landslide, the trio stamp an assured authority. The album even boasts an ambitious 12-minute epic, Stand Your Ground, however it’s here that my nagging doubts finally surfaced. The lack of a fourth Gordon and one who might play the drums. Don’t get me wrong, the programmed drums are fine, they just miss that synergy that the three brothers have. But let’s not take anything away from this debut, and if muscular melodic progressive rock, that’s not afraid to be quirky, floats your boat – then The Limits of Deviation is well worth investigating. And as it is on Bandcamp it is only a click away… 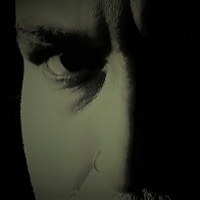 Across 2022, Exowst plan to release one track each month, and to mark the release of the third track at the end of March, I decided to offer some musings on the three very contrasting pieces thus far. The opening gambit was the extended, eighteen-minute plus 1789, released in mid-January, which comprises a series of live takes using “Gamelan Gongs, Orchestral and Suspended Gongs, Burma Bells, Bass Drums, Electric Guitars & Voice”.

The accompanying video is a still photo of an autumnal graveyard, and befitting the haunting nature of the piece. How this ties in with the significance the number 1789, isn’t indicated. The Angel number 1789, for instance, tells us that there are positives on the horizon (let’s hope so). Dately, noteworthy events here were Britain abolishing the slave trade, Bastille Day, the mutiny on the Royal Navy ship HMS Bounty – there are more, but I digress.

So what and who are Exowst? The what is a mystery, although the Scots online dictionary reveals exowst is ‘to exhaust’, which sort of rings true as Exowst is a solo project of Edinburgh-based percussionist and multi-instrumentalist Snow (Alan Emslie), who like so many professional musicians has been robbed of his livelihood over the last two years. Exhausting indeed.

Numerically speaking, February’s release 222222 was perhaps more obvious – or is it? I stumped for a play on the numbers from the date/month/year of February, and something of a trademark for Mr Emslie. Now whereas 1789 was a rather amorphous affair, 222222 is pulsed by a Bechstein piano and then embellished with layers of synths, sound effects, downtuned guitars, along with orchestral gongs, cymbals and percussion. The end result is rather beautiful in a somewhat agonised way…

Key to the tracks is the spontaneity of the performances, but equally the mixing and the aural treatment of the sounds. So the guttural guitars blend into the fabric of the music adding depth and warmth, the voices are tortured, but immersed, whilst the wealth of percussive instruments add to the detail and tangible structure.

The concluding offering for this quarter is 1001001. And the permutations are somewhat endless; 136 if we convert from binary to a decimal, a QR Code, or perhaps a birth date? Numerologically we end up with the number 3, the third release? I digress, again…

Regardless of the numeric inference, 1001001 itself displays another side to the multi-faceted AE, which he denotes as “Dance Metal Tranz Metal Avant-garde Metal”. Not a new direction as such, previous AE releases have included music in a similar mould, the excellent Duchesse De Bourgogne from 2018’s Obnubilate springs to mind, or Downforce released some 20 years ago on Emotive Bay. 2022’s 1001001 is a lively, ear-friendly piece with a solid bass drum pattern, rhythmically interesting and percolating synth, and bolstered by well mixed guitar.