Since the last Spock’s Beard album, Noise Floor in 2018, half the band have joined the Pattern-Seeking Animals project, the brain child of one of Spock’s principal songwriters John Boeghold. Now on album number three, what began as a side project has surely now graduated to fully-fledged band, and a very refreshing entity they are proving to be. This latest release is probably their best yet, and if its quality is matched with deserved success, a return to the Beard camp might get somewhat delayed.

Putting such speculation to one side, let’s examine Only Passing Through, the just released new album. Boeghold (keyboards & songwriting) is joined as usual by Ted Leonard on vocals and guitar, Dave Meros on bass and ex-Beard drummer Jimmy Keegan. This line-up is augmented by an ever expanding range of instrumentation, some sampled and some real, which widens the scope of the sound and arrangements considerably. The musical ability of this band is not in question, but it’s the songwriting which is the band’s key strength. Whether it is a simple ballad, a straightforward rocker or a prog epic, Boeghold delivers quality compositions consistently, and he has a band capable of breathing life into his vision.

Opening track Everdark Mountain is a great example, a rocking prog song which manages to contain every element one needs in a song but which doesn’t break the three-minute mark. Its folky intro, underpinned with Meros’s solid bass, builds quickly with Leonard’s soaring vocals and then Mellotron, before some meaty guitar chords and crisp drums lead to a wonderful keyboard and guitar break. And it’s all over before you know it, yet it’s as long as it needs to be, so an impressive start. I Can’t Stay Here Anymore follows, echoing guitar and bass ushering us in, before keys bring a sense of tension and faint menace. Lyrically, Boeghold describes returning to a familiar place which has changed for the worse and no longer feels like home. It can be interpreted on different levels, a trick which the writer is quite adept at, and employs on more than one occasion. It’s melodic and memorable like many of his songs, and works well. His keyboard flourishes seem to offer relief from the tension, perhaps a glimpse of a better future to be discovered elsewhere?

By the third song, Time Has A Way, we are pitched into a proper prog epic, although with P-SA, that doesn’t mean a cliché-ridden rehash of past bands. That’s not the way this group works. For every Hammond swell, there are several modern sounding touches, so we are never looking backwards. The song divides into two halves, the first busy and bustling along with changing time signatures and interesting instrumentation (is that a viola in there?), Meros and Keegan powering along whilst strange keyboard sounds bubble away and angular guitar shapes spit. The second half changes mood completely, slowing as we drift into a spaghetti western soundscape and a story of a stranger who loses the object of his desires, threatening to regain her with his gun. Leonard’s guitar solo captures the spirit of the piece perfectly. He really is a revelation, because despite having been well aware of his vocal prowess since his Enchant days, I now find he is a fine guitarist too, and that voice is stronger than ever. The use of brass instruments on this section is outstanding, recalling the way they are employed to brilliant effect by Big Big Train, and as we are led into the Western sunset by the trumpet and the song draws to a gentle close, I am left feeling that this is the way a modern prog epic can and should sound; like nothing that has been done quite this way before.

Rock Paper Scissors is a charming ballad, sounding rustic and folky, and recalls the childish games of youth. Or does it? Even a simple song like this has unusual textures and can be interpreted in other ways, and it’s catchy as hell. Much Ado is a rockier affair, with a jagged stuttering riff and Mellotron before giving way to acoustic guitar and piano. The lyrics are clever, and say a lot for a song about nothing!

Only Passing Through is a beautiful ballad contemplating mortality, then we are thrust back into what seems to be another western soundscape, and in that respect, this sounds like a companion piece to Time Has A Way, but Said the Stranger has a more ominous and sinister undercurrent, and a mysterious lyrical narrative. It’s another wonderful example of P-SA’s ability to conjure songs which are undeniably prog, yet in a style unlike any other band; originality without sounding too ‘out there’, or unapproachable. It’s a delightful balance the band seem able to strike with ease. Final track Here With You With Me is another prog epic, sounding grand and elegiac, but avoiding the bombast or pretension often associated with our genre. Again Leonard proves his lead guitar playing has improved remarkably over the years, or maybe he hid his light under a bushel, who knows? His playing here is superb.

The CD version includes a couple of bonus tracks which are also worthy. Indeed, I’m Not Alright could very easily have fitted on the album proper, and is a great song tackling the difficult subject of mental health with sensitivity and honesty. Ted Leonard inhabits the piece with a wonderful vocal performance, made easier no doubt by the incisive writing of Boeghold.

So the band has delivered what I believe is their finest album yet, and a collection of songs which truly deserve to be heard. They certainly sound like they mean business, and it would be wonderful if they can get on the road and underline how powerful and accessible they undoubtedly are. Welcome back guys. 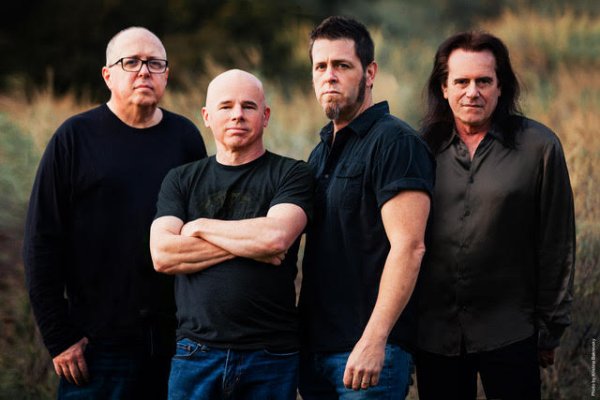