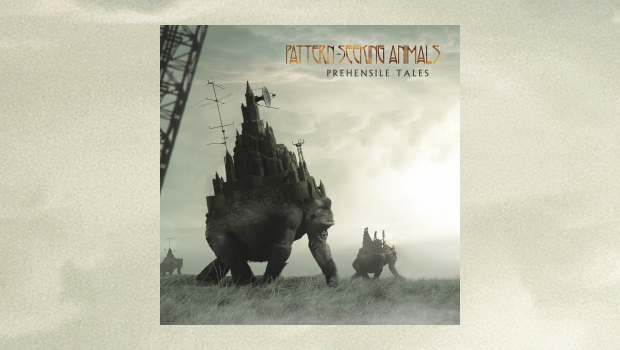 October 6th 1967 was the day that the tenth episode, called Mirror Mirror, of the original Star Trek series was aired, where a transporter malfunction caused a duplicate but now evil crew to emanate from the mistake. And here’s the thing, Evil Spock had a beard! Full speed ahead Scotty to 1992 and the Progressive Rock band Spock’s Beard came into existence, considered one of the leading modern versions of this genre. Line-up changes and the band’s survival after the departure of early lead-man Neal Morse has meant thirteen studio albums so far, and a few excellent offshoots.

One of them is the four-piece Pattern-Seeking Animals, who are about to release their second album. Comprising current Beard singer Ted Leonard (also credited with guitar), alumni Dave Meros on bass, Jimmy Keegan on drums, and long time collaborator John Boegehold producing, songwriting, and playing the keyboards.

For the six songs on Prehensile Tales, the band has expanded its sonic boom by introducing violin, flute, trumpet, cello, sax and pedal steel to their paint box that was once again recorded and mixed by Rich Mouser. Lyrically, the songs’ subjects range from second chances in life to vampires to shipwrecks to facing mortality, all played with an extremely high standard of musicianship and production. 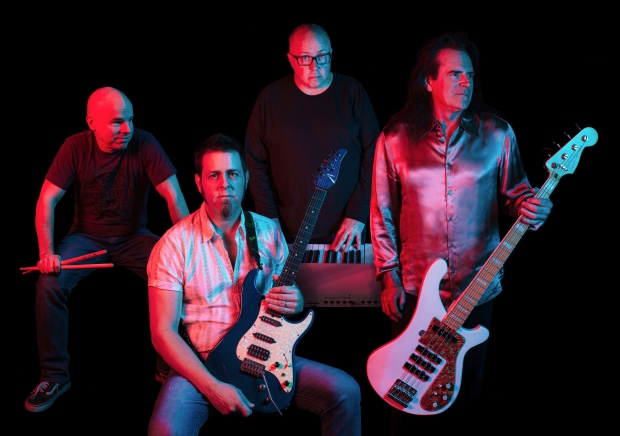 Straight off the starting grid a driving bass and drum intro takes the pole position and Raining Hard in Heaven puts the rock boot in. The clean sound with everything in its right place is immediately apparent. Over to the commentator John Boegehold:

Where do the band name and the album’s title originate?

“Originally, Pattern-Seeking Animals was a phrase I read somewhere that I liked and used in the lyrics to my song Bulletproof (from Spock’s Beard’s Noise Floor LP). It refers to humans who seek out patterns (that may or may not exist) around them in order to survive and evolve. When we formed the band, it seemed like a good band name, especially since nobody else was using it.

Prehensile Tales is a play on words I’d written down a few years ago that I thought might be cool to use in a lyric one day. Later when I was trying to come up with a title for the new album with an animal theme, it seemed to fit, especially when I discovered the second definition of “prehensile”.

And it is an easy album to grasp. Track two Here in My Autumn has some great guitar and keyboard flourishes, plus an interesting approach to a guest violin player, giving a ‘Kansas’ feel to the song, also Ted’s vocals are very reminiscent of that American institution. Again, the production fills the spectrum to the max, bass really cuts through and the drums have a timeless feel with none of that ‘clickyness’ found on the kick. Throughout all the music, there is also a frequency filling layer of percussion too.

John comments: Kansas is one of my all-time favourites, but we weren’t intentionally going for that sound. The violinist’s name is Rini, a great player. She’s Indian and lives in New York. I was trying to go with more of an ethnic vibe on a few places on the album and since she has a background in Indian classical music, I thought her playing suited the music quite well. As for the production, it can be tough sometimes guessing in advance which new sound or production technique will eventually sound dated. To me, a lot of stuff you hear from the ’80s and ’90s sounds much more dated than material recorded in the ’60s and ’70s. Rich (Mouser) has a great ear and instinct for those kinds of details when mixing and mastering.

Throughout the album, John Boegehold’s keyboards have a contemporary timbre but there’s enough organ and Mellotron to satisfy fans of classic keys, but they have a supporting rather than a dominating role. Was it maybe a decision to make them sound different to Spock’s Beard?

It never crossed my mind to use different approaches or sounds, keyboard or otherwise. I went with the type of sounds I like and thought appropriate for the music. There are so many fantastic new synths out there that I use but I also try to balance them with the classic piano, Mellotron, etc.

A surprising and unexpected feature of Prehensile Tales is how good a guitarist Ted Leonard is, his singing is also exceptional for this type of rock music so that’s a given, but the guitar parts are very well delivered. With such a talented bunch of musicians, it must be difficult for a producer to almost have an opinion. Again, John has a few ideas about this:

Ted’s a great, versatile guitarist who in my opinion has been underused in other bands he’s been in. I play some rhythm guitar on the album and gave him a few specific things to play here and there but often, especially for his solos, I just point him to an empty section of the song and ask him come up with something cool, which he always does. Same goes with parts for Jimmy and Dave. I do write some specific parts but they have a lot of latitude to improve things.

The most off-kilter track is Why Don’t We Run, which has a strummy acoustic guitar gallop to it and could be described as ‘Mariachi Country’, especially when the guest instrumentation is noticed. John had a thought on this:

That song has several different influences running through it, from Spaghetti-Western to Tex-Mex to disco. I wanted to add a solo trumpet part to it from the moment I started writing it.

Whatever genre that song is, it’s an ‘amuse-bouche’ to the final two and most proggy tracks so far. At 17-minutes, Lifeboat is a prehensile tale of a man’s thoughts as he tumbles and turns in a lifeboat from a recently sunk ship. Could it be based on a real disaster or is the song allegorical? The author advises:

I almost never write lyrics from real events. I prefer to approach songs as a work of fiction, inventing situations, characters, conflicts, etc. Lifeboat started as a shorter song primarily about a guy on a ship going down. Eventually, I started thinking it might be interesting to go into his life leading up to it and his struggle with questions of faith and possible afterlife as his fate unfolds.

Featuring world-class playing from the band, Ted Leonard’s soloing is exemplary, but there is another angle to the arrangement where sax, trumpet, cello, and flute sit within the mix. It evokes nostalgia for a bygone era, and maybe attempts to place the ship in its place in time as these are deck band instruments? Also, the protagonist seems to fail in his attempt to keep alive, with mention of The Northern Lights as a conduit for his demise? But what does the writer have to say about this?

I never thought of the instrumentation I used being deck band but I like that interpretation and what it implies. I did try to avoid any lyrics that would make it seem like it was happening in current time. Much of it, especially part 4, is almost Dickensian in places…

Whether or not our hero is rescued I thought best left unanswered. The Northern Lights part is mostly imagery and can be taken in a couple different ways, depending on whether you think he survives or succumbs to his unfortunate situation.

Musically though, it has Spock’s Beard DNA in its cells, as the interaction between guitar and keyboards ride high upon Dave Meros’ driving bass and Jimmy Keegan’s relentless drumming. But if you thought Lifeboat was worth the entry fee, final piece, Soon But Not Today is the gilded gold that ices the cake…

A track that excels both lyrically and musically it has a basic message that, as humans, we always appear to put off today’s pressing tasks until the next day, a musical interpretation of that pub sign that tells us there will be free beer tomorrow?

Soon But Not Today was the last song written for the album, specifically to be the closer. The lyrics of each section don’t necessarily tie into the others but are loosely about someone who’s made a lot of mistakes in life looking for second or third chances to piece it back together. Musically it was very stream-of-consciousness to write so it goes through a few different styles along the way. Surf, reggae, etc., then into an admittedly Beatles-influenced end section, most likely because at the time I was reading Geoff Emerick’s book Here, There and Everywhere about recording the Beatles in the early days.

And indeed there is a lovely cornet sounding trumpet voluntary that is very Beatles-y as the song draws to a close. Talking of brass, careful observers will note what sounds like a Gentle Giant arrangement (on this song), would that be correct?

Often when you tell someone you used sax, trumpet, etc., they get the idea that there’s a horn section like Earth Wind & Fire, Chicago, etc., which isn’t the case. I like to use those instruments not in sections but as individual voices in the grand scheme of things a la Gentle Giant when Phil Shulman was in the band.

It certainly adds a psychedelic texture that again defies the era that is was recorded in. A superb smack at a classic slice of traditional prog, it sounds as if everyone was having a great time recording it and there’s an element of pure fun in the final account, and that imbues the whole album. John?

Great fun to do. My home studio is in a corner of my living room. All my synth and keyboard sounds (except for Mellotron) are from soft synths in the computer so, besides a few guitars and mandolins, the whole setup doesn’t take up a lot of room.

The way I work is that I write the songs then put together demos. From there, we take it to Rich’s studio here in L.A. to record the drums. Once that’s done, we send stems to Dave and Ted to record their parts. Since they both live in Northern California, that’s the most efficient way. Trumpet, flute, cello, etc. are all recorded at Rich’s studio. Once all the parts are finished we start mixing.

This group’s eponymously titled first album was a corker, and their sophomore follow-up only builds on that strength. Ted Leonard’s voice obviously cements the type of music this is, but fans of Enchant and this band’s Mothership combo will not be disappointed, in fact, the tale that can be grabbed is a no brainer to fans of good quality rock music. Period. This is an album that sounds fresh and polished but with enough soul and quirkiness to make it a classic for many years to come. 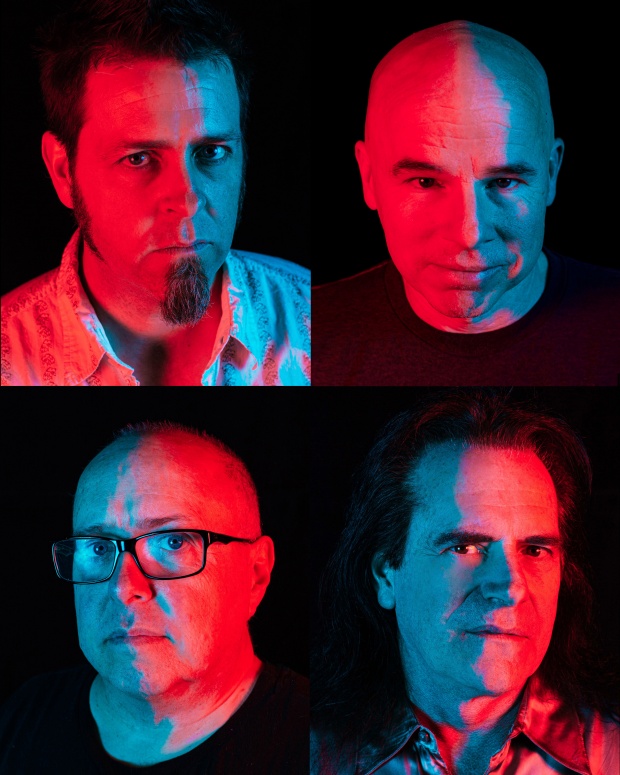 [Many thanks to John Boegehold for his time illustrating the finer points (well, that’s all of them) of this recording.]