Peder Balke was a 19th Century Norwegian painter, an alumni of the Royal Swedish Academy of Fine Arts, known for dramatic representations of the landscape of his homeland. From humble beginnings, he travelled widely, through Norway and abroad. In 1846 he sold thirty paintings to Louis Philippe I of France for display at Versailles, and his work has been exhibited internationally.

Balke’s paintings highlight the variety to be found in the wild Norwegian landscape, vividly describing the transformations of light and shade across endless skies set against the austere and rugged beauty of mountains and fjords, with similarities to J.M.W. Turner’s depiction of the British coastline. It’s a romantic vision to be sure, but Balke’s works are striking and filled with movement.

What better backdrop for an album inspired by the likes of Rick Wakeman’s The Six Wives of Henry VIII and Bo Hansson’s Lord of the Rings?

And that’s exactly what we have here from Bresk, an instrumental trio formed by Norwegian keyboardist Lars Christian Narum. A family affair, the band features Lars’ son Peder on drums and brother Jon on bass.

The result is unashamedly retro, harking back to Prog’s ‘Golden Age’ but with a contemporary edge – and it’s much better than the inspirations noted above. An impressionistic tour de force, at times it’s tightly arranged but with space for looser flights of fancy to describe Balke’s wandering through rural Norway, his journey to the French court, political upheavals in Europe and his altruistic development of the Balkeby area near Oslo, which was devastated by fire in 1879.

Rather than a complete biography we get key moments, snapshots of a life, beginning with an atmospheric drawing back of the curtains in Awakening. The wonders of the world await, amid the warming wash of a venerable Moog. With a change of pace we’re into the start of the album proper and Napoleonic Wartime Overture, describing the period into which Balke was born and lived his early life. There’s urgency from the driving lead Hammond, a la Jon Lord and it’s a rousing piece that immediately gets the foot tapping. The trio play particularly well together with Lars leading from the front in a full sound. The core is built on the complementary keyboard sounds at his disposal, from Hammond, Moog and clavinet, and there’s some lovely playing in the central section, Keith Emerson attack taking us into a stately ’70s groove with Wakeman flourishes.

An icy retro blast takes us into the snow-covered depths of the Norwegian landscape with The Mountain. It’s all about scale; the towering pinnacle of the peak before us. The sound is detailed and descriptive, carving out the rugged rocks in scratchy Hammond tones to an extended final note, a Moog wind whistling around us. From here we’re Sailing the Northern Coast, a martial rhythm bringing images of the gently rolling waves, the forward momentum of the boat coming from Lars’ uplifting ’60s inspired lead line. It’s moving stuff and the melodic centrepiece of the album, shot through with a majestic Scandinavian melancholy that seems to be quarried out of the crust of the place. My head is nodding along as I play this, there’s a rawness that adds gravitas, stunningly pulled together in the controlled power, with a beautiful comedown. The playing from all is superb and it’s just crying out for the volume to be kicked skyward.

Finally, we arrive at the very topmost tip of Norway in North Cape Arrival, and you can’t be much further away from anywhere as analogue stabs rise above the rhythmic base like the howling of the wilderness itself. A complete change of scene for Hangin’ Out with the King, a decadent and funky strut to the court of Louis Philippe. Reeking much more of the 1970s than the 1840s, it’s a Hammond wonder-fest, the dramatic power of the monster instrument shining through. The Revolution of 1848 has a stately, forward-looking sheen that makes you think of changing times, Moog lines entwined with a Hammond taking up Tarkus-like tones. My air-keyboard rig took quite a hammering on this one.

There’s a more homely quality to Balkeby, a vision of better times for all; better lives and a better place to raise your children. It’s again forward-looking and optimistic, with a good dose of ‘we can do this’ attitude, but… from sinister beginnings the flames spread and you can feel the panic as the conflagration devours Balke’s dream in The Fire.

And so to The End, possibly a walk through the ashes of the town, but also a life, metaphorically or spiritually, looking back at a time well-lived. It’s a fitting end to a quite wonderful trip, low-key and thoughtful, sad yet not without hope. Peder Balke was unknown to me before listening to this album; I now want to go out and look at his paintings. And, of course, Norway.

It’s a fascinating journey, cleverly paced and detailed to place you squarely in Balke’s world, but with a ’70s soundtrack that would no doubt scare the bejesus out of him. It’s adventurous and exciting, and should never be regarded as some kind of retro pastiche. The sounds may be old but the vision most certainly is not. The pictures painted are stunningly vivid and the whole concept works a treat, punchy and staying squarely within its remit.

It’s got to be (almost) the most fun three people can have in a small room, and it’s a fabulous listen to be sure. At times wholly exhilarating, I’m sure it would be a blast to see Bresk in full flow live. Don’t get hung up on the ‘sounds from yesteryear’ angle – they’re great sounds that will continue to resonate for anybody with a soul.

If you dig crazy Hammond workouts, this is must buy. And if you don’t, what in God’s name is wrong with you!?

A Journey Through the Life of Peder Balke 1804-1887 is out in digital form now, vinyl due in March. You know what to do. 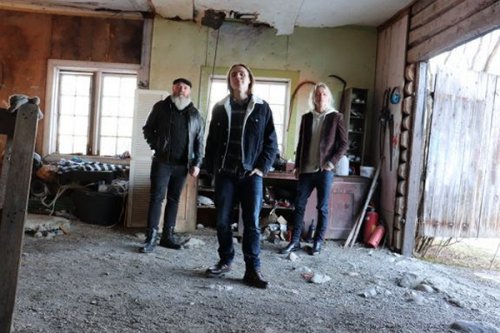