Fish has finally commenced his Vigil’s End tour, over 18 months since his last tour was cruelly cut short after just one date in March 2020 when the COVID Lockdown struck the UK. After a triumphant start on ‘home’ territory the night before in Glasgow, coming to the quiet Somerset town of Frome, due to a fire at the initially booked Bristol venue, may have seemed incongruous. However, make no mistake, the fine Cheese and Grain venue was packed and the crowd were certainly up for a gig. 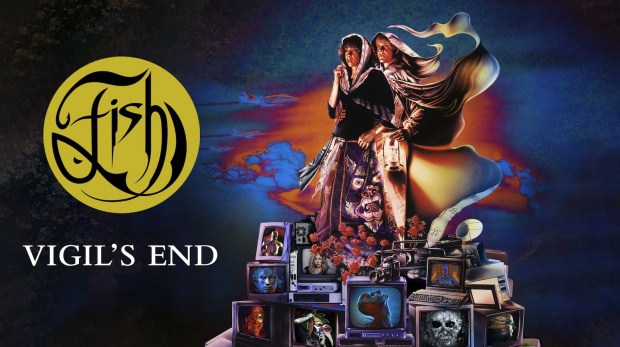 The main focus of this gig is his final album, the outstanding Weltschmerz, alongside a celebration of his excellent first solo album Vigil in a Wilderness of Mirrors, released over 30 years ago in 1990… with a couple of delightful surprises. Despite being virtually three decades apart, Fish points out that these two career bookending albums are strangely linked, and very much touch on similar themes. Fish has always been adept at intertwining songs with narratives and political messages alongside other pieces from a much more personal perspective. Grace of God from Weltschmerz begins proceedings very much on a personal level, telling as it does his near-death experiences in hospital. What is immediately obvious is that Fish is clearly in very good voice and his band are top quality and on form. This finely judged piece is the slow burning fuse which leads to ignition point for the anti-capitalism stomp of Big Wedge, which has the whole crowd clapping along excitedly – now this really feels like the rock gig so many of us have missed for too long.

Alternating new Weltschmerz and older Vigil songs continues with the angular Man with a Stick followed by State of Mind, the latter featuring some great bass work from Steve Vantsis. 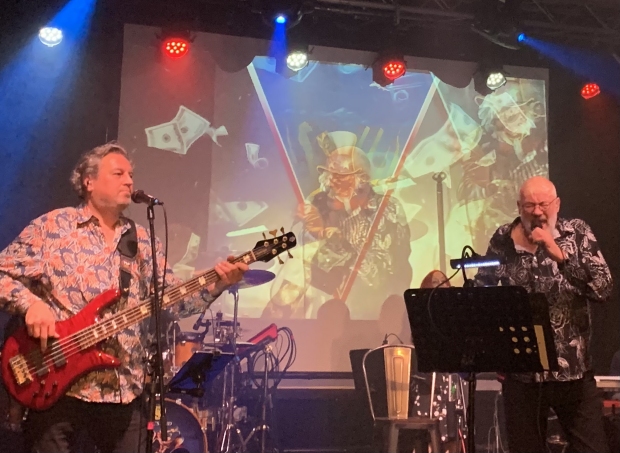 Gavin Griffiths excels during the peculiarly percussive Man with a Stick, which also highlights the assured and strident keyboard sounds of new man Spencer Cozens. The great visuals contrast the image of an old man with a stick which later morphs into chilling pictures of police wielding very different sticks… and the song poignantly ends with Fish miming an old man walking away, holding an imaginary stick. Fish described State of Mind as ‘ageless’ and still very much relevant thirty years after he wrote it. It’s difficult to argue with that assertion in the light of recent political sleaze with lines such as:

The crowd sing along and John Mitchell (of Frost* and Lonely Robot) plays a delicate acoustic guitar. Hearing this song in a live context certainly added to the resonance for this listener… one can only hope that one day the people see through all the bullshit and lies. 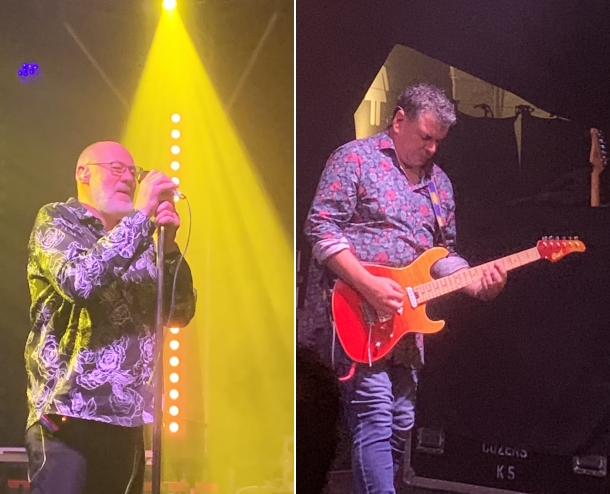 Fish has never shied away from controversial subjects, next focusing on child and domestic abuse with the very dark Family Business, forcefully played by the band. Doris Brendel, who had earlier entertained the crowd with her own band as the support act, provides excellent and impassioned backing vocals.

A gig which had been building up very well then reaches new heights as Fish embarks on two widescreen pieces. Vigil in a Wilderness of Mirrors makes its atmospheric entrance with Fish’s gentle voice over Cozens’ synth canvas and Doris Brendel on penny whistle. The tempo picks up and the band is in perfect synchronicity. The anthemic refrain is welcomed like some sort of conquering hero by the crowd, singing along with Fish in front of Mark Wilkinson’s iconic artwork, including a silhouetted Scottish piper. Vigil is simply one of the best songs of Fish’s whole solo career and a real highlight of the show.

In contrast with that sure fire winner, Fish takes much more of a risk with the less well-known epic Rose of Damascus, from Weltschmerz, preceded with an impassioned introduction about the reality of the lives and motivations for desperate refugees running away from hell. Inspired by the story of the gardener in Aleppo, Syria, who planted flowers each day in the face of utter devastation, Rose of Damascus is conveyed evocatively with Eastern sounds and fascinating projected imagery. In the latter half, Fish intones a monologue over more understated music, very much a poet telling his story. Rose of Damascus does not build to a dramatic climax or sink into cliched indulgent soloing – instead the band paints subtle shimmering and fading musical pictures, echoing the uncertain journey of the heroine as she embarks on her desperate journey over water… there is no clear conclusion or neat ending for the narrative; she doesn’t know how it will end, so why should we? This is a brave piece to play live – it certainly ain’t fun rock ‘n’ roll or easy listening, but it has such resonance. Fish can entertain and stir you, but he has always been able to make us think and poetically confronts difficult subjects. Just for a few minutes a part of Frome was taken on a journey, giving a little insight into the reality behind the lives of refugees, a far cry from strident tabloid headline lies and distortions.

Talking of difficult subjects, Fish surprises and delights everyone with nailed-on Marillion drug addiction classic He Knows You Know. He does not quite have the punk-like snarl of the original version, but this song is nearly 40 years old so that’s hardly surprising! Nevertheless, it has lost none of its impact, played with real bite by the band. The martial roll of the title song to Weltschmerz feels like a clarion call to his followers as Fish proclaims that he will not ignore the ‘World Pain’ he sees around him. As the final song on his final album, it indicates he will not fade away meekly, and it comes across defiantly in a live context. This Party’s Over seems to indicate the gig will be over soon, and with Brendel whistling away, Fish jocularly shares his realisation that health scares have taught him he needed to make some life changes! Conversely, thisqw sobering moment is presented like some sort of folk drinking song in such a fun way, and the crowd loved it.

Fish has the crowd in the palm of his hand now, mixing dark with light, soft with hard, sometimes in the same song. The heart-breaking Cliché is played with real delicacy and sung with such passion. John Mitchell excels with a moving and beautifully played guitar solo in his own inimitable style. Another Vigil classic brings the main set to a close as the band build to a suitable zenith with a powerful View from the Hill. Griffiths and Mitchell are particularly impressive as this peach of a song rocks out… and the place goes bonkers! 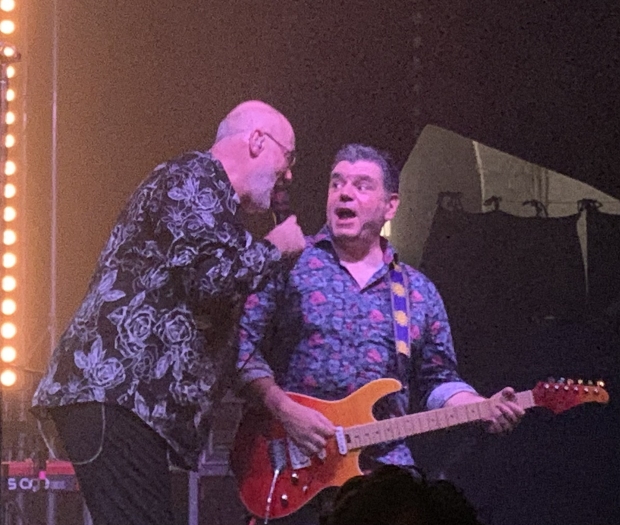 The encore initially sees only Fish and Spencer Cozens return to the stage, Fish touchingly dedicating the lovely A Gentleman’s Excuse Me to his daughter Tara, who is running the Merch stand. I am not sure where Fish unearthed Cozens but he is rather a gem of a keyboard player, as shown in his sensitive playing of this gorgeous and melancholic song, sung so poignantly by Fish. Having calmed the crowd down with that emotional piece, Fish and his band whip them up into a veritable frenzy when the unmistakable opening piano chords of Marillion’s Fugazi chime out – a real surprise classic in the setlist. The crowd sing the opening verse word perfectly and the band carry them along with a fantastic rendition of what must be one of the best songs of Fish-era Marillion. The whole place is literally bouncing along as the band launch into the ‘Thief of Baghdad’ section – how can such a bleak song make so many people feel so incongruously happy!? Suddenly a room full of men and women ‘of a certain age’ are no longer in post-Covid 2021, they’re back in 1984 and 37 years younger (or whatever age they were when they got into that album) and they’re all proclaiming at the top of their voices: “Where are the Prophets, where are the visionaries, where are the poets…” – indeed, more than ever, where are they? 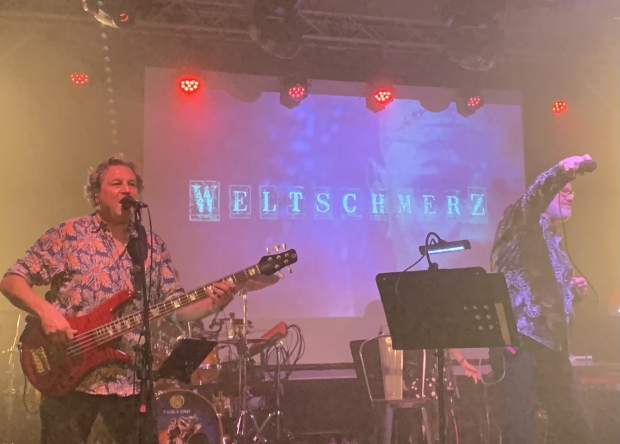 Fish and his outstanding band return for one last hurrah and it’s party time with The Company, Fish’s joyously fun drinking song which has the whole room dancing, inducing hundreds of ‘ballerinas’ twirling all together – who gives a toss if we’ve got work tomorrow and some of us may have hangovers and won’t have had enough sleep? For that moment Fish led us a merry dance and we just abandon ourselves to silliness and frivolity. Moments like that are special and why live music should be cherished.

I have a confession to make – I was really apprehensive about this gig. Why? Because the last time I saw Fish, in Bristol in 2018, it was, frankly, rather a disappointment. Back then it seemed as if the fire had gone and he was clearly not fully well, and the band were not really on it. That underwhelming show was difficult to take for someone who had followed Fish since 1982 and had seen him many times. Fish had already stated his desire to bring the curtain down on his career after his next album, but in all honesty, the listless performance that night was quite dispiriting (and it’s probably significant I uncharacteristically did not feel able to review it). Maybe, to be fair, it was just a ‘bad day at the office’? We all have them, but it did feel like a significant decline. 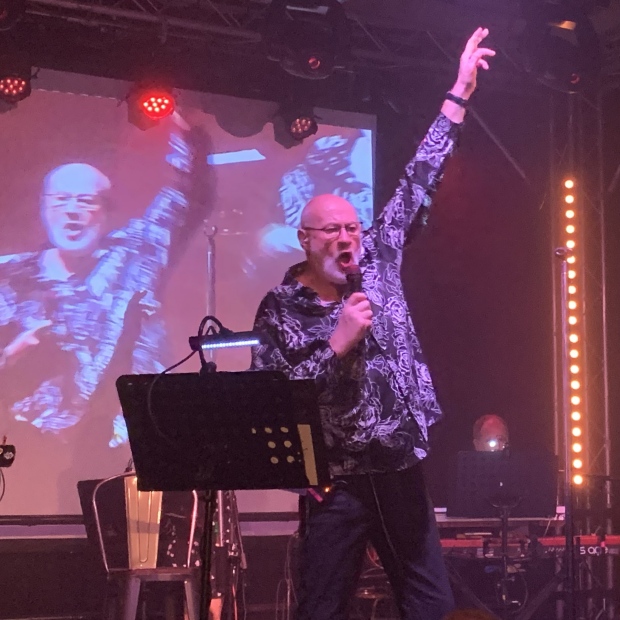 However, I am delighted to report that the Fish seen this week is a very different creature indeed. The voice and demeanour have been renewed with vigour and fire. He’s still grown older (haven’t we all?) but he has clearly regained his spirit and was feeding off the energy of a great crowd (which he described as ‘absolutely f…ing amazing!’). Alongside him, his skilled band was firing on all cylinders and Fish was clearly just enjoying being on stage with them. It probably helped that he heard while on stage that Scotland had qualified for the World Cup play-offs, although he jokingly lamented it being held in teetotal Qatar! The banter with the crowd was snappy and funny at times, and at others his introductions burned with indignation and passion about injustices. Fish has lost none of his ability to charismatically engage with the crowd. Most importantly, this was just great music and words being performed with great skill and poise by a class band, presented in an entertaining and thought-provoking manner. What more could you want from a gig? Indeed, this was one of the best Fish solo gigs I have ever witnessed… and I’ve seen quite a few over the years! The long journey home seemed worth it, knowing that a musical hero was back to his peak. The world may have felt ‘totally Fugazi’ in the last couple of years, but evenings like this remind one that when there’s live music and great gigs full of magic and fellowship the world really does not seem so grey and maybe literally anything seems possible… even getting up for work after far too little sleep next day! (😊) 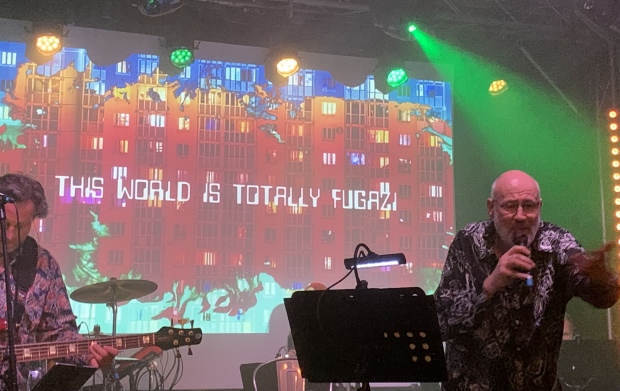 SETLIST
Grace of God
Big Wedge
Man with a Stick
State of Mind
Family Business
Vigil in a Wilderness of Mirrors
Rose of Damascus
He Knows You Know
Weltschmerz
This Party’s Over
Cliché
View from a Hill
~ Encore:
A Gentleman’s Excuse Me
Fugazi
~ Second Encore:
The Company