Fish played the final date of his Moveable Feast Tour to a sold-out Spirit of 66 in Verviers, Belgium (yes, Verviers!). Re-scheduled from the previous date of 4th December due a throat infection, the intimate venue was packed to the rafters, the mass of hot bodies banishing the chill winter night, creating a very cosy atmosphere; not recommended for claustophobics… I’d never seen Fish before and can’t say I’m a massive fan of his solo work, but I had picked up his most recent release, A Feast of Consequences, in order to prepare myself for the gig and the album had been slowly growing on me.

The band hit the stage at 20:30, versus the advertised time of 20:00, “sorry we’re late”, said Fish in his gravelly, rich baritone. The band launched into the set with vigour and I realised immediately that I was going to enjoy the show – as is often the case, the songs come to life on the stage, the extra energy and immediacy brought to bear making the material much more pleasing, at least to myself. 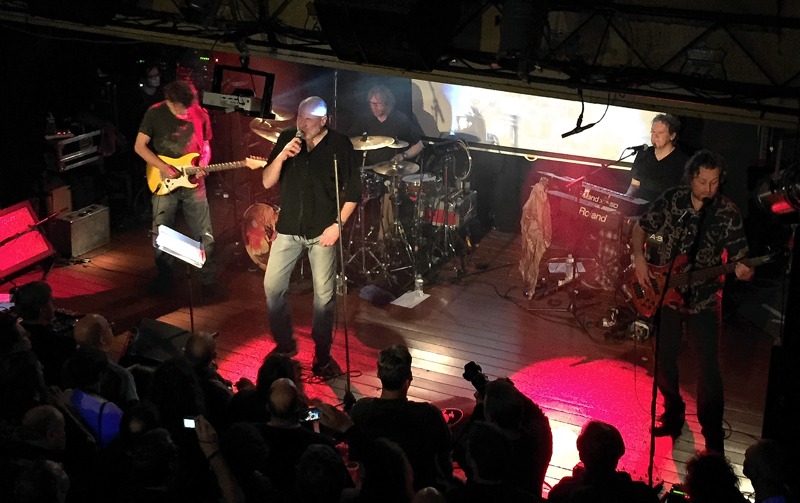 Opening with Perfume River and the title track from A Feast of Consequences, it did take a few numbers for Fish to dial-in his voice. That’s not to say he was singing badly, but he was clearly holding back a bit. Whether this is normal for him, or he’s having some problems I couldn’t say – he was also coughing a bit between songs and verses. He doesn’t attempt to hit the high notes from the early material any more, chosing to stay in, or go down, an octave when you expect it to go up; as he said himself, “if I was a horse they’d shoot me”. Nevertheless, his voice is, in many respects, better than ever and works really well in the lower ranges, so not a toally fair perspective. He many be the ripe old age of 56, but he commands the stage – being 6’5″ helps a bit in that respect – and he cavorts around, clearly the antics of his younger days with Marillion, grease-paint and costumes is still in there somewhere. He’s also a great raconteur, with lots of chit-chat between the songs, interesting stuff too, not just filling space.

Once he’d warmed up he attacked the songs with more gusto, Manchmal, from 13th Star, in particular losening the vocal chords, it being a much heavier song that the opening two from Feast. The band left the stage after Arc of the Curve and Fish then proceded to tell a tale of visting France and discovering the histories and locations of his grandfathers who were serving there during the First World War. Thusly he introduced the High Wood Suite, which was played as a single track and joined together like that sounded like a prog epic. There were projections to go with the music, but as I was up on the balcony I didn’t have a view of the screen. 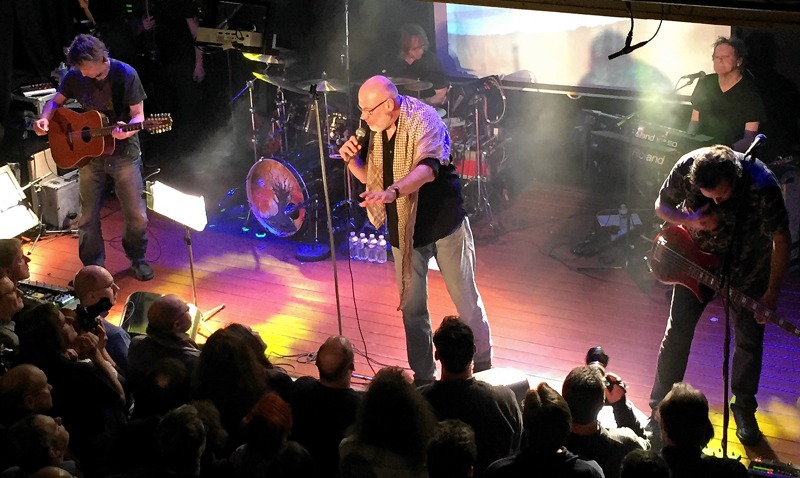 The first Marillion track played was from Slàinte Mhath from Clutching at Straws and this really got the crowd excited. Then, during Vigil in a Wilderness of Mirrors, Fish stepped down from the stage to walk and sing amonst the audience, which was a nice touch. The pacy Big Wedge from the same album followed, but I have to say that the punch of the chorus was a little bit lost with Fish keeping to the lower ranges – I’m suprised that one of the other musicians didn’t harmony that to create the effect at least. The ever crowd-pleasing and sing-along, Heart of Lothian closed out the main set to rapturous applause.

A little pause here to mention the band, all of them very fine, competent musicians and, as a unit, clearly well rehearsed and extremely tight. Have to say that despite their obvious technical talent, they were there to support the main-man and not steal the spotlight for themselves. The guitar work of Robin Boult was of the highest quality, he’s a great player with a lot of empathy for the music and he handled all of Rothery’s parts from the Marillion tracks with aplomb. On keyboards we were treated to John Beck from It Bites, some of you may know also him from John Wetton’s band as well. He seemed a little subdued, but no doubts on his playing abilities, classy. The rhythm section consisted of Panic Room’s Gavin Griffiths on drums and long-time bass player Steve Vantsis, again not really breaking loose, rather supporting the music very solidly. 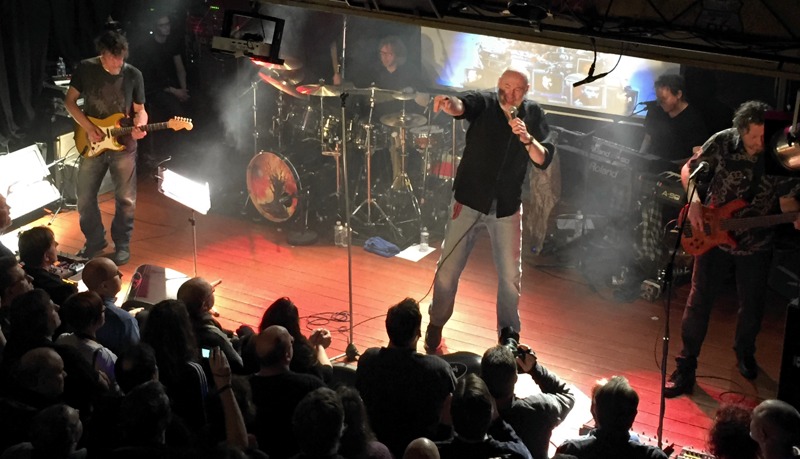 The first encore – Incubus, from Marillion’s second album, Fugazi – did however allow the band to stretch their legs a bit, especially for Gavin’s drumming and Robin’s guitars. Very welcomed by a ecstatic audience, but by comparison, the second encore, The Company, although a rousing song, seemed a little flat, personally I would have swapped those two around. 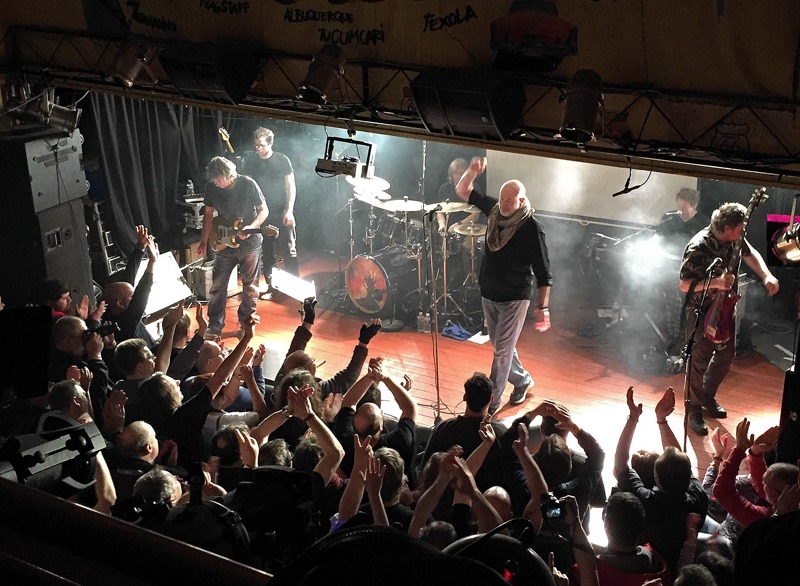 Altogether, this was a very enjoyable evening and although I’m not totally enamoured by Fish’s solo work, in the live setting it worked extremely well. Fish’s experience is clear, he’s an amiable and relaxed entertainer with enough fire in the songs to add some edge. I clearly got the impression that the crowd wanted more older songs (=Marillion), but I can appreciate why Fish concentrates on his own, newer material, especially now he’s effectively announced his retirement from music in two years time. The good news for the fans though is that Fish is booked for Night of the Prog X in July for the 30th anniversary of Misplaced Childhood (The Progressive Aspect will be reporting from Loreley). 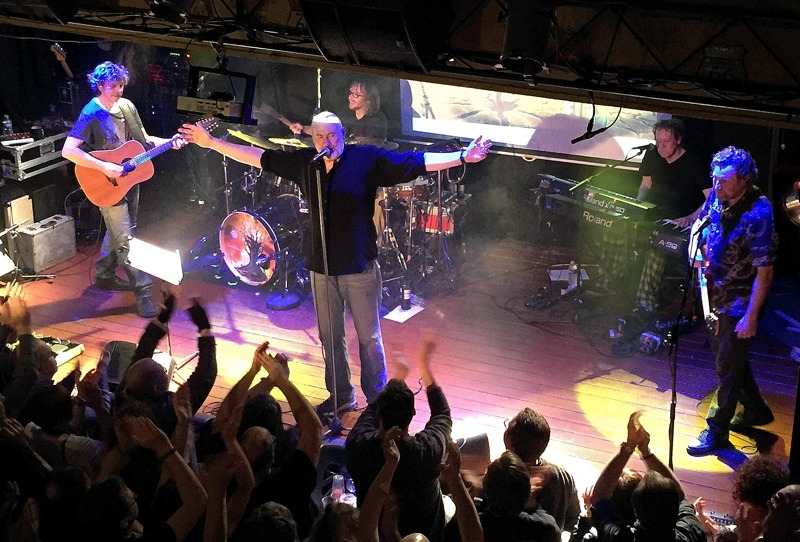 As is usual, the sound in Spirit of 66 was very good, but perhaps a little too loud, I will be back there for Neal Morse in a few weeks, not sure how they’ll get Portnoy’s kit on the small stage they have, but OK…