One of the delights of music is never ceasing to be amazed by the unexpected. I was introduced to Finnish heavy metal giants Nightwish by the friend I least expected to be into metal. I was then amazed to find them to be so much more than just another metal band, a delicious fusion of metal and prog with an operatic twist.

I was further amazed to hear II: Those We Don’t Speak Of, the new album by Auri, released earlier this month. Auri is a side project by Nightwish’s Tuomas Hopolainen (keyboards and backing vocals) and Troy Donockley (guitars, uilleann pipes, whistles, voices and so much more) with Hopolainen’s wife Johanna Kurkela (vocals, violin, viola and keys).

II: Those We Don’t Speak Of could not be further from Nightwish’s metal roots, a dream-like Celtic-tinged fantasy world fuelled by Hopolainen’s infinite imagination, Donockley’s arsenal of folk instruments and magical touch and Kurkela’s youthful and tender voice, full of childlike wonder – fragile and gossamer, yet powerful and moving beyond words. The flow of Auri’s celestial, uplifting mood music captures from the first notes and does not let go. 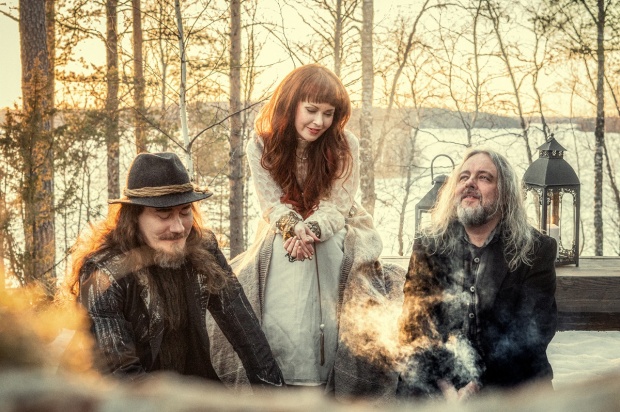 Auri’s music takes progressive folk to a whole new dimension, although perhaps this is not so surprising given their collective backgrounds. Hopolainen’s early influences were jazz and classical before being taken to see Metallica and Guns N’ Roses in the nineties. Under Hopolainen’s guiding influence, Nightwish have enjoyed twenty years as one of Europe’s premier bands.

Troy Donockley was born into a musical family in Workington and influenced by his father’s eclectic music collection before joining the family group Travelling Country at the age of 16. As a leading exponent of the uilleann pipes (traditional Irish bagpipes powered by underarm bellows) he found himself in demand for session with work artists as varied as The Enid, Máire Brennan (Clannad), Barbara Dickson and Maddy Prior (Steeleye Span) before forming The Bad Shepherds with Adrian Edmondson in 2008. Donockley first augmented the Nightwish sound, as a guest, in 2007 becoming a full-time member in 2013.

Classically trained Johanna Kurkela plays violin and piano and has released a number of solo albums in her native Finland and married Hopolainen in 2015.

The album opens with the title track, dark and mysterious, memories of sleepless nights as a child with a furtive imagination. The first track released from this new collection was the gorgeous Pearl Diving, an uplifting song of hope in two phases, each with its own beautifully captivating melody.

“No lifebelts needed”, Donockley comments, “where is the sea and where is the boat but more importantly, what is The Pearl? How deep do we dive to find it? How was it made and how old is it? Shapeshifters and the whispering seagulls of the 12-note scale will tell us. ‘Aweigh anchor, Away!’”

The Valley invites the listener to close their eyes and dive into the magical tunes, to hear Johanna’s tender voice… fragile, yet powerful and moving. One imagines the green and peaceful little valley taking shape before your eyes.

“The Valley is an ode to homecoming”, Hopolainen explains. “It`s about things worth a long wait and about all the wondrous waypoints on the road. And, while you`re wandering on that road, why not write a little tune to keep you company, a tune most delicate and hard to catch, but willing to reveal itself once you’ve made your journey, and have almost reached home.”

Kiss the Mountain lives and breathes with beautiful, multi-layered vocals, soft words that empower those feeling inadequate and reassurance to others fearing death, and sparse but effective instrumentation that gives the song a movie soundtrack quality.

“There’s a place at the edge of an ocean, where wind speaks through lungs of steel”, muses Johanna Kurkela. “A mountain awaiting a traveller, a dream awaiting a dreamer. You’ve come this far, do you dare to go all the way? Doubt may come and visit, but it’s just another friend along the journey. A gentle reminder of that perfect Kiss Of Life upon arrival. Imagine you’re already there. Find your smile, light a beacon, and let us hear you Roar!”

Light and Flood is the album’s only instrumental track, in a similar vein to the All The Works of Nature suite which made up the second half of last year’s Nightwish album Human II Nature.

The Clannad-inspired The Long Walk is followed by Scattered to the Four Winds featuring Donockley’s uilleann pipes, strings, and a beat conjuring images of warriors returning home from a crusade. Donockley also shares the lead vocal on closing track Fireside Bard.

II: Those We Don’t Speak Of takes a big step forward for Auri as they seek to create a unique identity. While the first collection bore many hallmarks of their Nightwish pedigree, the new album loses much of the heavy orchestration and has a calmer and more peaceful ambience which, hopefully, will extend their appeal far beyond their metallic roots.