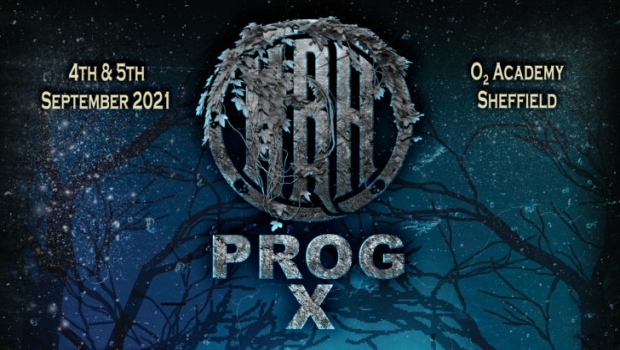 After many changes to both the date and the line-up due to the COVID 19 pandemic, HRH PROG X finally kicked off at the O2 Academy in Sheffield (and the O2 Shepherd’s Bush Empire in London) on the first weekend of September – welcomed by musicians and audience alike who have awaited the return to live music for well over a year. The Progressive Aspect reviewers were there to provide a summary of a great festival of progressive rock over the two days.

This young 3-piece band from Birmingham kicked things off very well and delighted the early audience with a fresh, energetic and melodic mix of instrumental math rock, djent and progressive metal.  They had performed well at the Prog For Peart festival in Abingdon a few weeks earlier, but they took to the larger stage and amplification very easily and raised the performance up another notch. Zaid Crowe’s powerful guitar runs intertwined seamlessly with Stuart Drinkwater’s complex bass lines, while Josh Ainsworth’s drums kept it all together. They mixed heavier and lighter styles of prog metal, including funky and jazzy elements, with tracks such as Slumber, Believe, Patience and Serpentine all played with infectious enthusiasm. Their engaging set was one of the unexpected highlights of the weekend for many.

A late replacements for Sonic Trip Project, and they deserve praise for stepping into the breach at such short notice. Paul Woodwright’s psychedelic rock band brought a trippy ’60s feel to proceedings with their simple compositions, Justin Prescott’s Joy Division-like bass motifs and Keith Chenery’s spritely drumming keeping the audience’s toes taping in the early afternoon. The earlier, lighter and dreamy tracks such as Silly Little Thing and the Neil Young-like Magic Carpet Ride were eventually replaced by the darker and heavier space rock sounds of early Hawkwind/Floyd with tracks such as Hypnotiser. Closing track I’m Losing My Mind was the hypnotic highlight of a set that built up steadily over time.

After an initial technical delay, Bram Stoker delivered a melodic slab of ’70s retro-style progressive rock with a Gothic edge. Virtuoso Emerson-like keyboards from founding member Tony Bronsdon duelled nicely with Neil Richardson’s expressive guitar runs, all supported by the husband & wife rhythm section Josephine and Warren Marks. The older and newer studio compositions gained a richer, more muscular feel from the live setting and neo-prog flavoured tracks from latest album, No Reflection – such as Gotta Get Out of Here, Otranto and Ballad of the Bogeyman – worked well, before a medley of older songs ended the late afternoon set atmospherically.

THE CRAZY WORLD OF ARTHUR BROWN

One of the highlights of the festival and a real surprise for many. In remarkably fine operatic voice and physical condition, the 79-year-old God of Hellfire and veteran of psychedelic prog rock – supported by his tight and expressive band – delivered a mesmerising theatrical set, including the classic Fire, which got the audience on its feet and soaking up the experience. Masks and costumes enhanced the performance, and the ensemble playing, especially the keyboards, and vibrant, atmospheric stage craft on display was very impressive. Angels was a particularly emotional highlight. The performance definitely changed the opinions of many who thought they might have been seeing a tired, heritage rock band performance.

Another classic band originating from the ’60s also proved a big hit with the audience at the start of the evening. Since 2016, early ’70s members Pete French (vocals) and Steve Bolton (guitar) have continued to keep Vincent Crane’s legacy going with modern audiences. There was a strong, driving, ’60s/’70s style hard rock groove with wonderful proggy noodling on the organ by the impressive Adrian Gautrey, keeping the music flowing throughout – often with a blues-rock feel. The more well-known songs like Tomorrow Night and Devil’s Answer were complemented by other tracks such as the slow burning Black Snake, the instrumental Don’t Lose Your Mind and the driving Breakthrough. A very professional, well-paced set that would have surprised quite a few in the crowd who haven’t seen them before.

The UK’s premier prog-metal band, making their live return after almost two years, powered their way through a vibrant, dynamic and diverse performance showing their heavy and proggy sides. Largely showcasing the well-received Legend of the Shires album, strong vocals from Glynn Morgan and tight, intricate and expressive instrumentation from guitarist Karl Groom and the rest of the band combined perfectly. Steve Anderson’s bass drove the sound, along with Johanne James’s exuberant drumming and Richard West’s flowing, proggy keyboard passages. Epics like The Man Who Saw Through Time and Lost in Translation were complemented by the likes of Stars and Satellites, Mission Profile (a tribute to former singer ‘Mac’), Snowblind and Small Dark Lines amongst many others. An assured and professional return to live action!

As a complete contrast, The Enid ended the evening with their unique and inimitable blending of prog and classical music. A reflective Robert Godfrey on keyboards and synthesisers orchestrated his talented band, including Jason Ducker on guitar, through the decades. Starting with The Last Judgement and continuing with the likes of Charades I: Humouresque, In the Region of the Winter Star and Malacandra/Shiva amongst others, with Nicholas Willes and Karl Thompson keeping the dynamic percussive rhythm throughout. Soothing and pastoral one minute, stirring and powerful the next – and of course, for those who stayed around despite the late hour, the patriotic pomp of The Dambusters March/Land of Hope and Glory ended the day with a smile.

The young Oxfordshire trio started proceedings on the Sunday. Led by Ben O’Connor on guitar and vocals, they played a short but dynamic set full of youthful enthusiasm and ragged charm. Joe Bodsworth prowled the large stage back and forth, his rumbling bass dominating the sound, ably supported by Max Collings on drums. As at the Prog For Peart festival, they played in a style that was a mix of ’70s rock and ’90s grunge (with echoes of Pearl Jam) within a contemporary alternative rock framework. They showed good instrumental interplay, with a swaggering Wake Up and funky Mary Jane particular highlights. Not especially proggy, but it got the early festival audience in the mood for the rest of the day.

Pete Jones brought his full band version of Tiger Moth Tales to the festival for a well-received and wonderfully quirky set. Supported by his Red Bazar colleagues Andy Wilson (guitar), Mick Wilson (bass) and Paul Comerie (drums), Peter started with the proggy instrumental The Mighty Fallen before Feels Aright and then a dynamic Tigers in the Butter. Great vocals and instrumental interplay, even on the more contemplative Blackbird. Many more highlights, but it was the wistful A Visit to Chigwick, followed by the reflective and emotional Still Alive, with the crowd singing along heartedly by the end, which brought a lump to the throat of many a festival goer after a very special performance. A real ‘journey into prog!’

FRANCK CARDUCCI AND THE FANTASTIC SQUAD

For many, the discovery of the festival was undoubtedly Franck and his band. The charismatic Frenchman started with Slave to Rock ‘n’ Roll and never looked back. The band played an exuberant mix of rock ‘n’ roll and prog rock in an engaging theatrical spectacular with great instrumentation and entertaining lights and costumes, from Mary Reynaud in particular. The Betrayal of Blue was a new and impressive ecological song, and during The Angel Mary danced around the stage with lighted wings. The epic, but accessible, Alice’s Eerie Dream proved a real highlight of the set and the acapella version of On the Road to Nowhere at the end had the audience entranced. From the buzz amongst the crowd after the set, Franck Carducci and his band won’t be ‘prog’s big secret’ for much longer, hopefully.

With the unenviable task of following Franck Carducci in the teatime slot, the Lithuanian 4-piece prog rock ensemble gradually warmed to the task and their atmospheric mix of powerful, modern prog rock went down well with many. Lush retro-keyboards from Bozena Buinicka complemented some soaring virtuoso guitar playing from the laid-back Jonas Ciurlionis as they ran through a selection of tracks, old and new. Starting with the title track from their latest album, Automatic Minds, and then dipping in and out of their back catalogue with tracks such as The Guardian of the Water Tower and the epic When the Wind Blows before concluding with Dead End. This was a well-performed, brooding, slow burner of a set.

The classic progressive jazz-rock band took to the stage in the early evening, amid great anticipation. Led by Dave ‘Clem’ Clempson on guitar, the current line-up started with The Valentyne Suite, with expressive saxophone from Kim Nishikawara and classic Hammond organ excursions by Nick Steed as Mark Clarke on bass and Malcolm Mortimore on drums kept the rhythm solid.  The quality of the playing was extraordinary, and the musicians soon had the audience’s full attention. The arrival of the legendary Chris Farlow on vocals brought a bluesy edge to the proceedings as well as much humour on stage. Jack Bruce’s Theme for An Imaginary Western proved a popular choice to cover, and the band continued to mix jazz, blues and retro-prog in varying amounts before the set ended in a blues-rock jam session to great applause and smiles aplenty.

Bringing their mix of trippy ambient soundscapes, psychedelia, electronic techno dance beats and prog to the stage mid-evening, Ed Wynne added his spacey guitar passages and synth effects to complement Silas Wynne’s synths and programming as they surfed through pulsating musical themes. It proved a hypnotic and atmospheric set and Ed was joined by Saskia on flute and Joie on additional synths during the set to enhance the oscillating, dream-like, improvised feel of music both old and new.

The fine weekend of live music was brought to a close by the prog-infused melodic rock of Mostly Autumn. The band started with the powerful Tomorrow Dies, before The Last Climb brought a change of pace and some lovely flute from Angela Gordon. The popular standards of Evergreen and Mother Nature remain set highlights. Bryan Josh’s expressive guitar solos and Olivia Sparnenn-Josh’s angelic vocals define the Mostly Autumn sound, but Iain Jennings provides the prog flourishes on the keyboard, where needed, and the rhythm section of Andy Smith and Henry Rogers effortlessly propel the music forward. Guitarist Chris Johnson shone on Changing Lives and the poignancy of Heroes Never Die has never been as strong as it is at this particular time. Just time for Celtic-tinged Forever and Beyond to bring proceedings to a rousing and uplifting conclusion for the sizeable audience still present, despite the lateness of the hour and the prospect of work the next day for many.

…and that’s the end of HRH Prog X – a word of thanks to the organisers, staff, security, musicians and audience for making it a very enjoyable return to live music on the big stage. Here’s to more live music in the months to come. 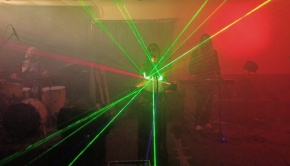