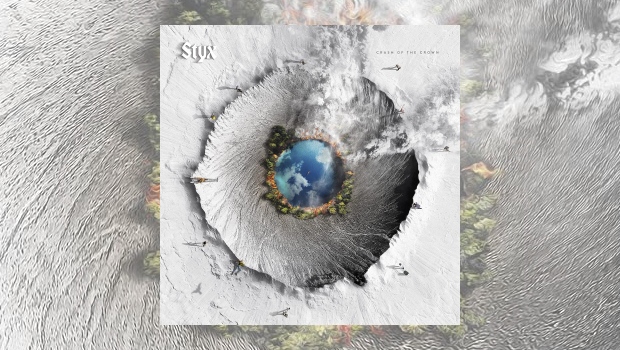 Styx has always been something of an outsider in rock music: successful as an AOR band with symphonic tendencies, producer of mainstream hits and ballads. Active since its foundation in 1972 and extremely successful in the mid-seventies, the fact that I could not find one single album review within TPA’s extensive library says enough about the hesitancy towards the Americans from Chicago. But the older the crazier, these guys are now somewhere in their seventies and, after a long break between 2005 and 2017, have released new material quite shortly after their last album, The Mission, which was well-received by both press and public. And the new stuff contains some real magic, especially in the context of our beloved genre.

Crash of the Crown is the seventeenth studio album by the legendary band. It’s not a real Covid-19 album; most of the music had already been written before the global epidemic did its devastating work. It is preceded by sophisticated marketing efforts, complete with interviews and the release of videos for both singles Reveries and Crash of the Crown. Fifteen relatively short songs, the total playing time is about 45 minutes, but Styx was never known for its long epics, with a few exceptions. In fact, on the new album Styx has attempted to copy the Beatles’ Abbey Road approach: pasting together short, standalone songs, without apparent cohesion. It worked out well in 1969 and still has maximum effect in 2021.

In the past, Styx has often shown a preference for anthems and hymns, which is also valid this time: The Fight of Our Lives, Save Us from Ourselves, Common Ground, Sound the Alarm, but also To Those contain a strong message. Yet the band itself says in a commentary that they steer clear of outspoken political opinions and limit themselves to what they are good at: writing and performing music. How ironic.

Opening track The Fight of Our Lives is a short rock song, the lyric “we will not give in” sets the tone. A Monster (chasing its tail) connects seamlessly, the vintage keyboard sound, powerful multi-part harmonies and Tommy Shaw’s recognisable solo vocals standing out. Excellent drumming also from Todd Sucherman, an absolute top-notch drummer. Reveries was already known as a single on YouTube, “where have I heard this before?” you subconsciously think. Keyboardist Lawrence Gowan sings about his musings in this fine but heavy pop song, easy to sing along too.

Hold Back the Darkness is very different from all previous tracks, Styx’ version of Pink Floyd’s The Wall, both musically and lyrically (“I’m trying to break free from these chains, won’t you give me a break?”) and dark of nature. Further strengthened by Gowan’s voice, which seems eerily close to Roger Waters’. Excellent song, first highlight, partly due to the strong guitar solo at the end, unmistakably Styx. Save Us from Ourselves contains snippets of Winston Churchill’s famous speech (“We will never surrender!”). Tommy Shaw sings “One nation, indivisible” in another strong anthem with high sing-along factor, which will certainly do well live. I would have liked this to be a little longer than the three minutes it clocks in at.

All Styx vocalists have a share in the special and swinging title track Crash of the Crown, with its high Queen content. Just listen to the harmonies, Gowan does his best Freddie Mercury rendition and the guitar sound is heavily influenced by Brian May. Hopeful sounds emerge in the predominantly acoustic Our Wonderful Lives, somewhat reminiscent of Brian May’s 39 as the Queen connection continues, Beatle-esque trumpets completing the picture.

Clocking at exactly four minutes, Common Ground is the longest song on Crash of the Crown, a hymn with vocals shared by Shaw and Gowan. It’s a popular title these days, as used for Big Big Train’s new album. Once again utilising those recognisable old-skool keyboards, the song continues the theme of Our Wonderful Lives and builds on it. Tommy Shaw’s voice sounds hopeful in Sound the Alarm, are we going to make it as humanity? Most of the lyrics are written by Shaw, who seems reborn in that respect.

“The King is dead, and the world is set on fire, and we all scream, Long live the King”. Is this about the US Presidential elections? We’ll probably never know, but the urgency resonates, both musically and lyrically. Lost at Sea is an apparently insignificant little thing with vocals by Gowan. Oriental sounds and a wonderful chorus in Coming Out the Other Side reference Crowded House’s best material. Another strong pop song by Styx with a delicious slide guitar for dessert. To Those (who do survive) sounds like a brilliant battle song, with a mean guitar solo, but unfortunately comes to an end somewhat abruptly and way too soon. Another Farewell is just an ultra-short instrumental prelude to closing track Stream, which once again has fine slide guitar tune and makes a worthy and positive end to an excellent album. The production is brilliant, the sound clear and powerful.

The only criticism I have is the fact that the songs are on the short side, the longest barely reaching four minutes. Some songs undeniably have more potential, but Styx seemingly chooses to stick to their well-known concise format. However, maybe something to appreciate; unfortunately we often see meaningless expanded songs and double albums that would have sounded much better as a single. The (power) ballads do not return on more recent studio material from Styx, one of the biggest differences with the past.

Crash of the Crown is characterised by the fact that there are almost no weak songs. That’s something I’ve come to experience differently from Styx in the past. This album can easily withstand criticism, both musically and lyrically, and in my opinion fits in nicely with classics like Paradise Theater, Cornerstone, Pieces of Eight and The Grand Illusion. A greater compliment is hardly conceivable.