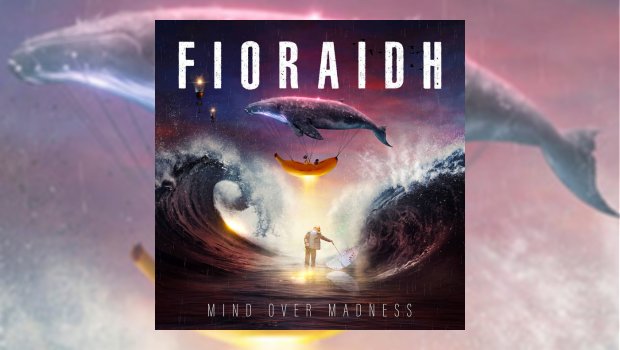 Fioraidh is a new solo project from Scotland with some history. The name Fioraidh is a Celtic neologism that pays tribute to the band Fury, that Mark Reid was once a member of. The pronunciation of both names is roughly the same, but Fioraidh simply looks cooler. But whether intentional or not, there is a deeper implication – that Reid’s music under this name is still authentic Fury, for ‘fior’ is the Gaelic word for true, real, genuine, and ‘aidh’ (aye) is the affirmation. Fury existed in the ’90s, and after its demise, Reid stopped making music for two decades. While Mind Over Madness is not the first release Reid has put out under the Fioraidh name, it is the first truly new music as the first two EPs were re-recorded songs from the time of Fury. Reid plays all the instruments on the album (apart from some additional guitar from former Fury bandmate Graham McLeod), and produced and mastered it all himself too, and he has does a grand job of all of this. The cover art, too, is Reid’s and I think it’s well worth mentioning, as it is this that first drew me to the album. Reid has been a graphic designer for thirty years or so, and his experience in the field has resulted in easily one of my favourite covers of this year. But how does the music stack up?

Well, you can’t ask for a more grandiose introduction to Fioraidh than the 24-minute concept piece Heart of Madness. The Overture that begins the piece is reminiscent of Dream Theater and Porcupine Tree, but don’t be put off when I say this. While these two influential bands have created many stale and uninspired bands, Fioraidh is definitely not one of those. The Overture draws the listener in and sweeps them away from the outset, with some lovely syncopation before the music takes a surprising turn for the second movement, Breaking Point – and you couldn’t be further from Dream Theater or Porcupine Tree. This is the point where Fioraidh really grabbed me as, despite enjoying the Overture, I wasn’t entirely sure how long my interest might be sustained. This is such an awesome piece, and I love the way it violently erupts at the end when it transitions into the third movement, Confrontation. This is another heavy movement, and very short. The fourth movement, De Morte Matris, has Reid and McLeod trading solos at its climax, before the following instrumental movement (The Struggle Within) gives Reid a chance to show just how much he can do by himself. The sixth movement, The Struggle Without, is reminiscent of the second, but doesn’t end so violently. If anything, though, it is a more sinister segue into Serena. Once more a movement climaxes in solos, before another instrumental movement in At First, but this one is brief and suitably disjointed. The following movement, A Stab in the Dark, begins with a more fluid instrumental, before revealing itself to be a perfect penultimate piece. Everything is drawing to a close, and the tension is ratcheted, before final movement The Struggle Ends provides denouement and resolution, and McLeod gives us one final sweet solo.

Adreamaline follows, a jaunty and bouncy slice of prog metal that reminds me a little of Osada Vida. As such, it’s a very different sound to the song that it follows, and that proves to be one of Mind Over Madness’s greatest strengths for me. There is a real freshness and vitality to the eclecticism of the album, while still keeping enough of a thread of similarity that it all works and flows perfectly. One of the similarities, to me, seems to be the influence Alice in Chains obviously had on Reid. The quieter sections of Heart of Madness are reminiscent to me of that band, and throughout the album I often find myself hearing Jerry Cantrell-like sounds in Reid’s playing and singing. Indeed, Hurts Like Hell would not sound that out of place on Cantrell’s debut solo album, Boggy Depot. It’s one of my favourite songs, and I love the way it begins with a vibe similar to Heart of Madness, before changing up. Even though I’m sure there is no connection, if Reid stated that this was a song from the point of view of Albert (protagonist of Heart of Madness), I’d not be at all surprised.

Righteous Breed is another favourite of mine. Like Adreamaline, there’s an Osada Vida vibe, but this is just so much more enjoyable to my ears, and I love Reid’s rhythm section on this song. The bass and drums are so groovy. In the chorus, Reid’s vocals have a tone similar to Ozzy Osborne that is really effective and emotive. He has some pipes, that’s for sure. The versatility of Reid’s vocals over the course of the album are another selling point for me. He could so easily choose to utilise the same style, as most vocalists do, but Reid always uses the voice that best serves his music, and the sometimes the smallest change can make a dramatic difference. But the most dramatic difference of the album is musically. The next song is Fourteen Days Lain Alone, which Reid has made the most obvious and overt tribute to Layne Staley possible. The music is so steeped in Jar of Flies, and the harmonies so evocative of Staley and Cantrell. The lyrics are a game of spot the Alice in Chains references. The acoustic guitar is absolutely gorgeous, and if including this song was a gamble on Reid’s part, it’s one that has paid off in my opinion.

The final notes of Fourteen Days also lead nicely into the introduction of The Feeding Hand, which again shows the care Reid has given to the sequencing and flow of the album. After the opening epic, A New Horizon is the longest track on Mind Over Madness, and it manages to pull together many of the bands I’ve been reminded of thus far into one tune. Throughout the album, I’ve been reminded of Sabbath, Alice in Chains and Queensrÿche, but A New Horizon almost sounds like the three are playing together and over each other. That sounds disastrous and ugly, but actually it’s a full sound that’s quite invigorating. It shouldn’t work, but it does. It is, in effect the closing number, bookending the album with another lengthy track. However, there is one more song, as Reid has appended a cover of Alice in Chains’ Rooster. I often detach bonus tracks from the album on my iPod, not because I don’t like them, but because they disrupt the flow. But even though this could clearly be considered not part of the album “proper”, it follows on perfectly from the dying notes of A New Horizon. And, shock horror, I think I like this cover more than the original! Based upon this album, I can’t wait to hear what Fioraidh conjures up next.