Marillion’s latest live release follows on from their 2019 With Friends from the Orchestra album, in which they adapted a range of their material, augmented by classical orchestra players. They are not the first artists to collaborate with orchestras and for some it may indicate a lack of inspiration or a handy ‘plug’ to fill the gap between new studio albums… but this is Marillion, who never take the easy path and have always set a very high standard over their long career, so they went about that task with their usual alternative perspective, to avoid cliché. With Friends from the Orchestra was no tired Hooked on Classics collection of syrupy re-treads, simply an imaginative and inspired re-imagining of some of their work, giving much added musical colour to the songs. In late 2019, Marillion took their ‘Friends’ on the road and this release shows just how effectively this fine collaboration was realised on stage. St. David’s Hall in Cardiff is world renowned for its excellent acoustics for classical performances, which may explain why Marillion chose the ‘Land of Song’ to record this show, in addition to their long affinity with Wales since their early days and the enthusiastic responses they have always received in the Principality. They were definitely amongst ‘Friends’ for this show.

If anyone thinks adding orchestral sounds to Marillion’s musical palette would result in some sort of soft, sentimental musical pastiche, then listening to the added power and resonance given to these songs in concert should dispel any such assumptions; the music sounds HUGE at times. Alongside the sonic impact of these versions, one only has to consider the subject matter to understand that Marillion are a band with something to say, reflecting important issues such as climate change, humanitarian crises, fake news and super-rich oligarchs running society… alongside more personal reflections and stories. Songs like Gaza and most recent album F.E.A.R. show that Marillion can insightfully focus on crucial and controversial subjects. Marillion are also not about being a touring jukebox, endlessly repeating their ‘hits’, and for this concert they chose to play some of their more challenging and most ambitious recent pieces, with important things to say about our modern world.

Marillion do not compromise, preferring artistic freedom of expression rather than chasing audiences or diluting their material. They hit the audience straight between the eyes from the start with a massively powerful Gaza, laying bare the horror of the experience of those having to live in the Palestinian territory, faced by constant threats of violence and deprivation.

(True story – I attended this gig and at the last minute got a spare ticket for my son, not a Marillion fan by any means but he was curious. As Marillion and Friends from the Orchestra blast onto the stage with Gaza‘s avalanche of Eastern influences and power chords, my son rocked back in his seat and said “Holy Fuck!” – this was not the tired old ‘Prog’ he expected!!!)

Steve Hogarth sounds impassioned and in very fine voice, captured by the customary impeccable production – Marillion REALLY know how to record a live gig. Steve Rothery’s guitar wails in grief with his usual consummate skill; Ian Moseley handles the complex switches in tempo and feel. Gaza never sounded so dramatic and certainly packed a musical punch in keeping with its focus on a dire humanitarian crisis.

Beyond You, from 1995’s Afraid of Sunlight, is a song which has really benefited from the orchestral arrangement, the strings enhancing the opening section’s sense of pathos, and particularly the Phil Spector style ‘Wall of Sound’ of the more up-tempo part. 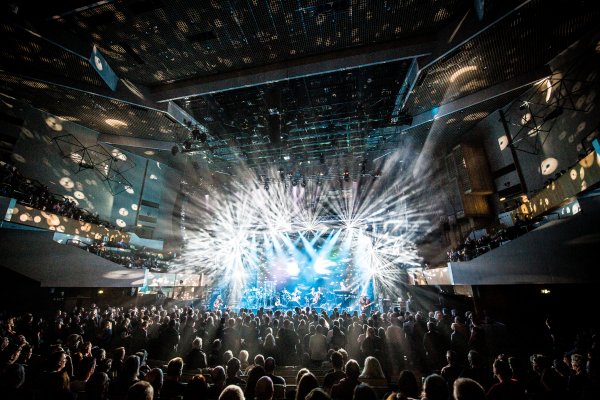 It has said been that Marillion like to feature songs about water and death (!) and they do not disappoint with two contrasting maritime pieces, portrayed elegiacally in Estonia and, more dramatically, the rarely played epic Ocean Cloud. This release interestingly includes Hogarth explaining the origins of Estonia, arising from a chance conversation with a documentary maker, the only British survivor from the sinking of the ship ‘Estonia’ in 1994. ‘H’ relates the experience of the film maker who witnessed many dying around him, desperately clinging to the upturned hull of a capsized lifeboat for five hours. This intro adds more resonance to the ensuing performance, enhanced so well by the suitably watery orchestral introduction and aptly liquid strings of the mid-section. Estonia is a starkly beautiful piece, one of the best of Marillion’s Hogarth era, and this performance may be its best ever rendition.

The maritime theme is spectacularly explored in Ocean Cloud, which Hogarth introduces with a brief explanation of the achievements of long-distance rower, Don Allum. The orchestral instruments perfectly augment this widescreen song, the strings giving a sweeping cinematic effect, supplemented by sound effects and flawless band performance. One can understand why Marillion knew this would make a great basis for added orchestration, which adds suitable emphasis during the more tumultuous sections without overpowering the piece, and in a live context the song really comes into its own.

Season’s End was one of the first songs Steve Hogarth wrote with the band, and its environmental message seems more current than ever. The threat of climate change is conveyed with an interchange between Rothery’s guitar and the strings as they intertwine in a swirling ascendancy, combining with Mark Kelly’s keyboards in a moving finale. 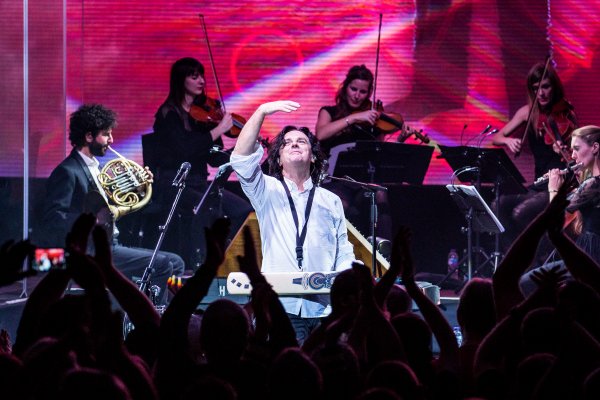 Hollow Man from Brave features Steve Hogarth on keyboards, blending smoothly with the cello in a subtle interlude, seemingly setting the scene for the angry and politically charged musical blast of The New Kings from F.E.A.R. (‘Fuck Everyone And Run’). Hogarth describes this as their ‘Rant Song’, adding that the album’s title is what they ‘suspect is the attitude of most of the people who are in control of us’… and let’s be honest, hardly a week goes by when we do not have a reminder of why it would be hard not to agree with that observation (e.g. ‘Everyone must self-isolate when pinged… Except us!’ Oops!).

The New Kings is such a deeply impacting piece, scathing in theme and with lyrics dripping in cynicism. Hogarth sings so well in falsetto, “Fuck Everyone and Run, Fuck Everyone and Run, Fuck Everyone and Run…” while Pete Trewavas anchors this leviathan of a song with characteristic perfectly judged bass. This version of the song is a powerful tour de force, combining the band and orchestral players in perfect unison. Pizzicato strings trip along, the players also adding backing vocals as Rothery’s guitar oozes plaintive regret. The dramatic and unmistakable sound of a Spitfire embellishes the stirring Why is Nothing Ever True? section, accompanied by the sound of the horn. The band and players rise in waves of musical power with Moseley and Trewavas driving the piece along, Kelly weaving his keyboards around the piece with skill and precision. The New Kings simultaneously ascends to a new musical level with the orchestral players during this performance whilst conversely their presence also adds more resonance to the song’s descent into cynical despair.

The Sky Above the Rain follows as we move on from the political and cerebral to this starkly emotional piece. This live version is truly heart-breaking, showcasing the strings and simply one of the best Rothery performances in any song he has played as his guitar drips with emotion, echoing Hogarth’s tremulously and emotive vocals. In contrast, Marillion inject some fun and energy as they rock out with a Led Zeppelin infused version of Separated Out (re-titled ‘Zeparated Out’). The strings mischievously slip in a few unmistakable bars of Kashmir for fun, and the whole band, orchestral players and audience are simply having a ball. 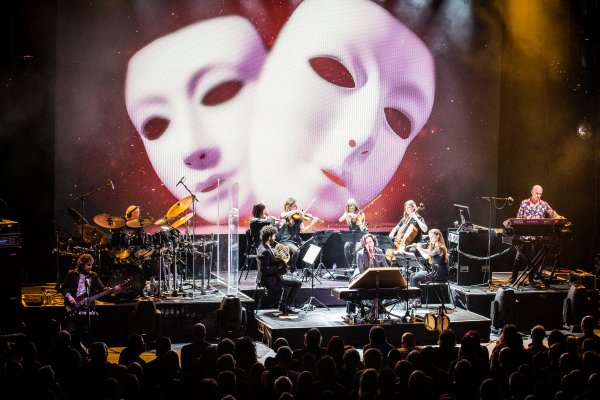 Fantastic Place is a perfect piece to embroider with lush strings alongside Kelly’s fine keyboards, but they are not done yet. Somewhat unbelievably, Marillion finish this show with yet another epic – This Strange Engine. This is a deeply personal and autobiographical piece for Hogarth in which he pours out his heart and life with assured and affectingly vocals. Musically, it is yet another triumph, band and orchestra combining smoothly to add great impact to the more dramatic sections, such as the simply crazy synth solo, supported by pulsating strings and drums, or with great touch in the more subtle parts, typified by the shimmering strings in the ‘Montego Bay’ section… and needless to say, Steve Rothery’s undulating second solo in this masterpiece is undoubtedly one of the best of his illustrious career. It is hard to imagine a more emotive and impactful rendition of this emotional and clearly heartfelt epic.

This show has been released as a 2CD Digipack, 3LP Gatefold, 2 Disc DVD & 2 Disc Blu-ray versions. The visual presentation of the spectacular show is impeccable on the DVD & Blu-ray, and just as with the previous concert release ‘All One Tonight’ the sonic production is absolutely crystal clear. The Blu-ray also has an interesting ‘Making Friends’ documentary about how the ‘With Friends from the Orchestra’ set was produced in the studio. There are also some ‘Bonus’ songs from other shows on the tour. Most notably is a stirring version of Man of a 1000 Faces filmed in Paris with ’Friends from the Salle Playel Choir’, plus audio of 3 songs from Kensington, with a slide show. In addition, on the Blu-Ray there is the full ‘With Friends from the Orchestra’ 2019 studio album in 5.1 audio, which is excellent with the right equipment. These are great bonus items, but the real winner is the live music itself, which shimmers with the extra energy, power and sounds brought by the synthesis of band and orchestral players. The ‘epics’ particularly shine with the injection of their undoubted chemistry.

This live release shows Marillion just doing what they want to, whether it is to express themselves uncompromisingly on contemporary issues or tell personal, elegiac, emotional and dramatic stories, spectacularly well in concert.

To paraphrase what I said after that gig in November 2019: Hopefully getting this release will in some ways move you, or amaze you, and hopefully make you think… but it will also entertain you. 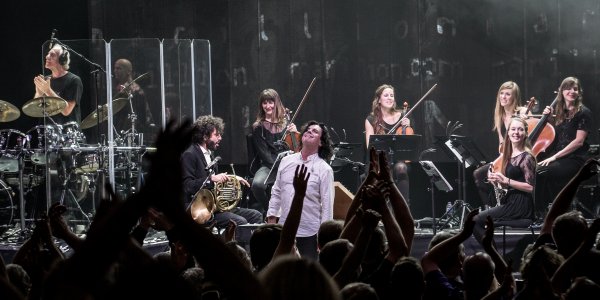 [With thanks to Anne-Marie Forker (www.forkerfotos.com) for the use of her images.]