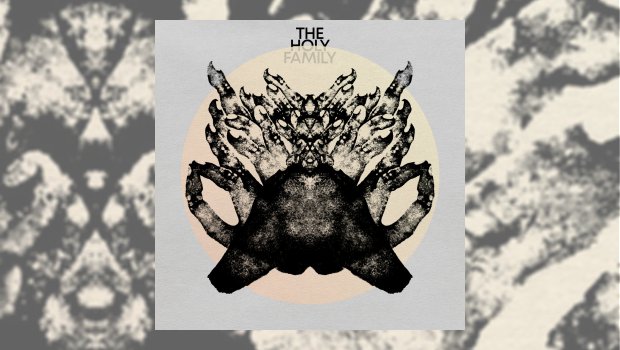 My initial thoughts were, “Can I just say… this album is fucking tremendous!” Read on further if you want the long version. 🙂

One of my go-to “altered state” albums has long been The Isness by Amorphous Androgynous – those who know, know. When I spotted a vinyl version of the Abbey Road mix of this fine slice of English wiggoutery on Discogs, I had to snap it up. I just played it prior to giving my shiny new copy of The Holy Family a spin, and it is the perfect hors d’oeuvre for David J. Smith’s main course, I must say! Gaz Cobain’s lysergic musings meld seamlessly into I Have Seen the Lion Walking, the opening woozily wonderful song on this effervescent new album from a new-but-old band, from whom we always await fresh waxings with a puppy-like eagerness.

You see, The Holy Family is really those tremendous righteous noiseniks Guapo wearing Kosmische make-up and a lush feather in their cap. Convening in Plague Year to craft a new album, David J. Smith and his mischievous troupe, namely Kavus Torabi, Emmett Elvin, Sam Warren, and Michael J. York, found that the heavy manners of the times was guiding the Guapo muse into an entirely different and colour-negative elysian landscape, far removed from its usual altar of levitational and deeply spiritual insistently heavy and heady rhythms. Here, where the musical kaleidoscope frequently hones in on rolling vistas of odd but vaguely calming hues, before heading off through clouds of Kosmische dust, things are not what they once were or may ever be again.

There’s even vocals on this record, something you won’t encounter in Guapoworld, as there was never room nor need for them. And no, it’s not Kavus singing, but mostly David, whose high register ‘John Lydon on mind altering substances’ often comes as a shock when it makes its brief fiery and plaintive interjections, as on Wrapped In Dust, deep into side two of this expansive meditation.

Forged from the white (this) heat of improvisation, while doing the very old hippy thang of “retreating to an old house in the country well stocked with the requisite fine wines and jazz cigarettes”, the album cooks and shimmers, and grooves and shimmies as it explores the surreal, and the all too real. Tribal rhythms occasionally surface, but not of the manically intense kind associated with Guapo, but of a more measured, though no less shamanic variety, building all the while in a hypnotic fashion that DOES link to the parent band. This is not a bad thing. By the time we get to side three, things have gotten quite sinister, as fucking enormous thunderheads fit to burst loom menacingly overhead, sheet lightning machine gun rhythmic charges scattergun across the sky, embellished by Emmett’s evil tinkling. The Inner Edge of Outer Mind is a dangerous place to linger long, and fittingly David’s Lydon-crackling cackle makes a return, using quotes from Dorothea Tanning’s Chasm: A Weekend, written at a mere 94 years young! Demons are confronted by David, reverbing and multi-tracking with impish glee.

Like all good trips, A New Euphoria is found, enabling the conscious mind to jettison nervous energy via mental solar flares that lessen the tension. This is the kind of album that deserves to be listened to in one sitting at suitable volume, or really, what’s the point? It is a shame that few of us have the time to sit down for 80-minutes plus to listen to music without distraction these days, but if you can manage it, this one requires you do just that in order to do it justice

“I see catastrophe, I hear the buzz that’s near…”


We reach side four (vinyl really is the only way to do this thing – you should try it), and we reach the summit with the Kosmische psalm St. Anthony’s Fire wherein we can look back at what has gone before and view the chasm to come which, as it turns out, is quite benign. A sense of fulfilment prevails, as hypnotic melodies play out over more tribal rhythms.

My concluding thoughts are “Can I just say… this album is fucking tremendous!” This may even be what some might call ‘Medical Grade Music’. 🙂

I gave up doing “Albums of the Year” lists not so long ago as, really, the list writer is only doing it for themselves despite what they might tell you, but… (can you guess the next bit?)