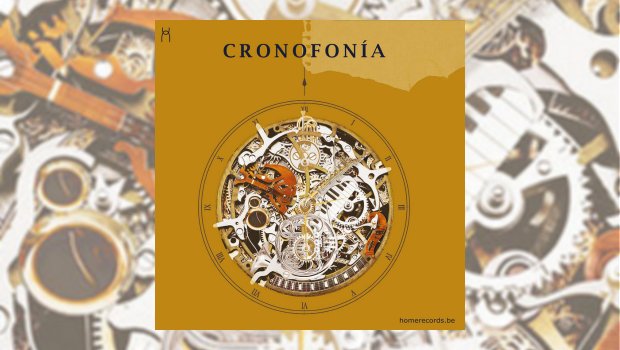 It’s possible I have a reputation for liking bands and artists from way out in left field, but while I certainly know a fair few people who like prog but are not at all interested if it’s trying too hard to emulate the classic symphonic era of the ’70s, I’m not one of those. Even if I do tend towards the more esoteric and experimental, there’s plenty of more mainstream fare that I thoroughly enjoy. This offering from Mexican/International band Cronofonía is just that. It reminds me of all those ’70s albums I love from King Crimson, Genesis and Yes. And there are plenty of musicians who have contributed to this project whose names will no doubt be familiar to most “old-school” prog fans. But it never sounds tired or dated, like a retread of what’s been done before, and done to death. In fact, appropriately, the music sounds completely timeless.

Appropriately, I think, because the name of both the album and the band is Cronofonía, which is a word I’m not sure exists, but if it does I presume it has to to do with time and sound. The sound of time through the ages? The passage of time, as heard through sound? Well, it seems as likely as anything else, given the album appears to take place across an allegorical 24 hour period. The album begins with one dawn, and ends with the next – but between these two, many years of history are covered, and the album itself was many years in the making. The Facebook page for Cronofonía was created in 2013, and since then the project’s contributors have celebrated many births (and, sadly, one death). The faithful have been informed of the progress – or otherwise – of the construction of this project, which involves thirty musicians from ten different countries. This is a truly grand affair!

The album was finally released in December 2020 in Spanish, an English language version following in April this year. The principal protagonists are father and son Joaquín “Negro” Ortíz and Pablo Patricio Ortíz, and although notionally the idea of Cronofonía was established in 2000, it utilises many compositions made over 40 years. So certainly, the passage of time is woven throughout the album, no matter how you look at it. But how does it sound? That’s actually a quite difficult question to answer because, over the course of two discs, the music covers a lot of ground. However, it is overwhelmingly in a classic and timeless symphonic prog style, which will be pleasing to the ears of many, with aspects of folk, Latin and jazz, with some heavier moments, too. One thing I love is the dramatic flair when there is a quite sudden stylistic change within a song. This happens on more than one occasion, and often when it’s least expected.

I won’t go so far as to say the variety of musical styles is as ambitious as the scope of the concept, but it’s definitely intriguing and captivating, and (as implied above) occasionally unexpected. In a way, the album flows almost like the score or soundtrack to a film – and I am certain there will be reviews that talk of how cinematic it sounds, and how well the varied soundscapes are brought together to create one homogeneous whole. In fact, given the length of the album is also that of a film, it is even more impressive to me that it so easily maintains interest. Honestly, this album seems to go by faster than many a third its length, so much does the music draw you in. And like any good film, even once you know the story, it’s still possible to be delighted by the twists and turns, even if they are no longer surprising. There are some themes that are returned to, or varied upon, which help with continuity and familiarity. It makes the album easy to listen to, and easy to love.

And that’s just the music. I’m really not a great one for lyrics, and I often hear vocals as one more instrument in the mix, rather than pay attention to what is being sung. But for the purposes of this review, I did try and pay attention. I’ve already said how the moments of a lifetime are represented by the moments of a day, and I suspect the whole album is perhaps meant to be heard as being told by the main character, as he reflects on his life, and those closest to him. Much of the lyrical content is intimate and personal, full of hopes and regrets, dreams and worries. They are beautifully sung by the various vocalists, and again the variety helps strengthen the cinematic nature of the album, and the passage of time. I’m not often a great fan of the use of multiple vocalists, and I assumed this might be my one criticism of the album – but I really can’t overstate how much the different vocalists add to my interest.

There’s a quote from Peruvian writer Mario Vargas Llosa that seems appropriate for this album: “The perfect dictatorship is not communism, nor the USSR, nor Fidel Castro; the perfect dictatorship is Mexico. Because it is a camouflaged dictatorship.” There are two interwoven tales of Cronofonía, one personal and one political. The album is almost a testimony of the political changes and social upheavals; and of socialism and capitalism. Sometimes only in allusions, and occasionally far more overtly, we are reminded of mass protests and demonstrations, and of the gradual revolutions that have led to a freer world. The collapse of the communist bloc in Europe, and the Mexican PRI who maintained absolute power for most of the 20th Century in opposition for the first time in 2000. The end of the album, the last few songs, the last few moments of the day before a new dawn, sound almost unremittingly hopeful.

My original review for this album was horrendously long as I wanted to write about some of the songs. But there were so many songs I wanted to include that it just wasn’t possible. There is so much that could be said about each and every song. The way they relate to each other, or to the personal and/or political stories touched upon through time. The way the storyteller seems to build in confidence over the course of the day/lifetime, so that (for example) each version of My Sister and I is stronger and more assured, until the absolutely glorious fourth part. (All four parts to this song are favourites of mine). The way that the music is able to provide a sense of time and place, so that the sound reflects not so much what it is being sung about, but where and when. Everything about this album has been so well thought out, so impeccably composed, and so adroitly performed.

Cronofonía is as prog as it comes. A double album of musical theatre that traverses history and geography, with a list of contributing musicians as long as the list of instruments played. When I review albums, I usually have to studiously avoid reading any reviews already published. In this instance, I don’t think I’ve even seen one review, so avoiding them hasn’t been difficult – but it does make me wonder why I’ve not seen any. This is the sort of modern prog masterpiece I would expect to see written about everywhere. It is an album I would expect to see high up in many people’s end of year lists. And yet, so far, I have seen nothing. So, if anyone has read this far, I sincerely hope that they are already listening to this album – and if you are, and if you enjoy it as much as I do, then please share it, as this is an album that definitely deserves to be better known than it appears to be.