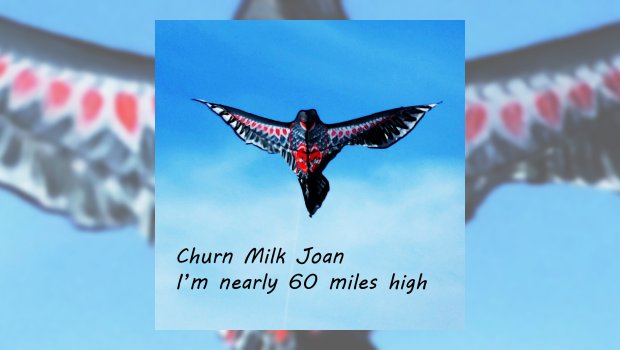 “Make a wish, ride a bike, you can do anything you like”, says the third optimistic line from opening track Just Bloody Lovely. It carries an extra poignancy, given its writer’s precarious condition. One half of Churn Milk Joan is Richard Knutson, an American musician living in Yorkshire, who just last June was diagnosed with Motor Neurone Disease. In some cases it develops and plateaus, Stephen Hawking being a famous example. In Richard’s case it has sadly progressed at a pace, and a mere eight months later, he is now restricted to head movement only.

Here’s a clip of Richard and his partner in Dada-esque noise, Colin Robinson, in happier times:


Richard remains optimistic, and would not want this piece to turn into a eulogy for the living, I’m sure, so let’s crack on with the music. The album was recorded around the time of Richard’s diagnosis, when he could still play guitar, bass, fretless bass, and some keyboards. Richard’s Beefheartian croak is all over the songs on this album, and his expansive and very American lyrics give the Spartan music a wide-open feel. “Make for the county line”, he drawls on Hand Me the Jump Leads, and we can put ourselves on a deserted dusty highway in Arizona, rather than the somewhat more prosaic (but “bloody lovely”) North Yorkshire of its creation.

The sixteen vignettes on this fine album are stylistically varied, and Trading Cards on the Balcony, the fourth song in, aims for a dislocated Devo funk straight from Uncle Fester’s Carny, which it knocks over on the way past. A wonderfully barmy guitar break from Colin Robinson, the other half of this unlikely duo, gives it a crisply manic edge.

Teatime in Space finds Colin and Mark Joell (bandmate of Colin’s in Big Block 454) chanting “Be unjustified” behind Richard’s stream of consciousness. It is all wonderfully surreal, like Kerouac after peyote. BIG guitar shenanigans sprawl all over The Local, Richard’s most cerebrally manic lyric on the album. Imagine if The Fall had been around in 1966, were American, and had Ry Cooder on guitar. Possibly.

Leaving aside the unavoidable sad circumstances of its creation, I’m nearly 60 miles high is a creative triumph, a wonderful trip, and you won’t hear music quite like this anywhere else this year.

Richard also records under the name Plum Flower Embroidery, and he has made several recordings recently, by controlling the cursor by head movements alone. The results are remarkable, given the circumstances. The latest was released on Valentine’s Day, and is entitled A Technical Bohemian. Airy and experimental, the music transmits Richard’s irrepressible spirit. Find it HERE.

You will have noticed by now that all these recordings are “Name Your Price”. I am sure a donation would be much appreciated by Richard and his family.

For further info on MND, and, if so inclined to make a donation to vital research into a condition that can strike anyone at any time, visit the Motor Neurone Disease Association HERE.