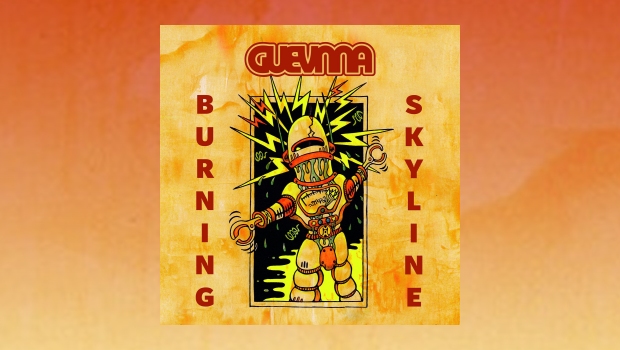 Japanese band GUEVNNA have been around for a decade or so. They’ve been releasing EPs and singles since 2012, and their first full length came out in 2016. However, I knew none of that when I came upon their second album, Burning Skyline (which received a domestic release late last year, and sees an international release this year). I’ve been listening to it ever since I saw the band described as ‘disco sludge’, and toying with writing a review. The reason it’s taken me so long is that I am well aware of the boring arguments that arise anytime something not obviously “prog”, to those with narrower definitions of the word, is given space. However, TPA explores a far broader sense of prog, and indeed the P in TPA stands for “Progressive” and not “Prog”. Without wishing to get into another boring argument about whether there is even a difference between the two – and if there is, what it might be – I believe there is plenty within GUEVNNA’s blend of styles to interest TPA readers.

The most attractive aspect of GUEVNNA’s music for me is that their take on sludge is like a breath of fresh air. Sludge is normally about doom and gloom, but despite sharing some of the more typical sludge tropes, it’s hard to listen to GUEVNNA without a smile forming. The band suggest they have a euphoric sound, and while that might be laying it on a bit thick, there is a definite rejoicing nature. It helps that the band up the psychedelia factor, compared with a lot of sludge bands, and at one point Komi’s guitar sounds like birdsong. The album is a continuous bursting of positive energy, and if they were going to San Francisco, they’d definitely be wearing flowers in their hair. I like the band most, though, when they get their funk on. A track like Vex Machine sounds like James Brown crossed with Jimi Hendrix, mixed with a little Chic crossed with Kylesa.

The band adds stoner to their Bandcamp tags, which makes sense as there is a great deal of crossover between sludge and stoner, but while stoner is often thought of as the psychedelic cousin of sludge, GUEVNNA definitely still have more of a sludge aesthetic, despite the liberal addition of psychedelia to the mix. They have the kind of style that I can imagine might alienate great portions of their potential audience, because their sound is so different to what is typical of the genre, but I have to admit that that is not the only thing that attracted me, but it held my attention. GUEVNNA’s sound doesn’t become tiresome after repeated listens. It’s novel, but no novelty. It’s retro, but refreshingly so, because the band don’t stick to the same tired old tropes. I’d actually like to hear them take their aesthetic further, and really up the funk of their disco sludge sound, as at times it feels like they are being too cautious.

What is interesting is that the band obviously consider themselves rock and roll, right from the introductory DJ patter of opening track Radio. The band then burst in with the first song being the title track – and it’s definitely rock and roll through a sludge lens. It’s glorious, with some plinky-plonk honky tonk to boot, courtesy of Ryo. And that honky tonk fits perfectly for sludge, as both are forms of music that tend to emphasise rhythm and groove over melody and harmony. GUEVNNA couldn’t really have provided a better statement of intent than this. While sludge tends to be a slow moving and lugubrious mass, it has always had odd moments of aggression that hark back to its hardcore roots. In this respect, Justifire is pretty much a typical aggressive song, and doesn’t appeal to me greatly because of that. But the album is immediately back on track for me with Into the Night. I love Temi’s drums on this, and Ryo’s vocals too. This is the sound of a band having a lot of fun, and it translates as a very fun track to listen to.

The fun continues with Solitude Before Storm, although it might seem less so initially. However, there is still much exuberance, once the chorus hits. Where other bands make solitude sound miserable, GUEVNNA find something to be cheerful about. This is a great wee track which I really enjoy, with some interesting twists and turns. At one point it’s like The Knack meeting Neurosis. And this is definitely the band’s strength, which I wish they utilised a little more. When they stick to a more standard sludge sound, they are nowhere near as enjoyable for me, but every time they make their own take on it, pulling in influences from rock and roll, funk and psychedelia and merging them seamlessly, it’s an absolute joy to listen to.

In any case, the way GUEVNNA fuse different styles in ways I’ve not heard before (though I freely admit there may be other bands who have done so) comes across to me as more progressive than some so-called prog bands (look at me inciting the arguments I said I didn’t want to have!). This is where GUEVNNA really shine, and I’d love to hear them push the boat out even more. The band play it safe a little too much, and I think have done so with their choice of song to promote the album (which I have deliberately not chosen to accompany this review for that reason). But they are so much fun when they throw all caution to the wind. I will definitely be following this band, to hear where they go next. If you’ve an open mind, I can definitely recommend this album. Maybe it will leave a smile on your face, too?