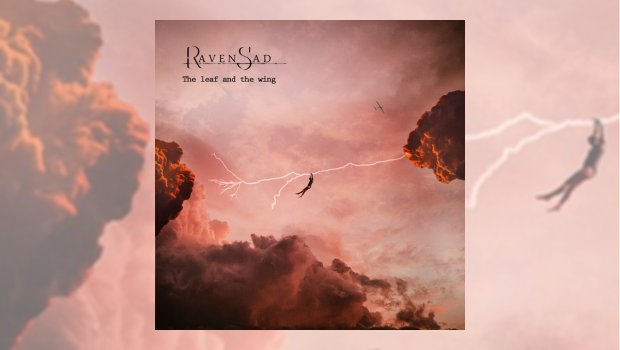 Raven Sad – The Leaf and the Wing

Let’s cut to the chase: Track 3, City Lights and Desert Dark – at the 7:16 mark comes one of *those* soul-rending, emotion churning guitar solos of such sublime existential intensity where exquisite ecstasy mingles simultaneously with an agony bordering on the unbearable, the aftermath leaving you an exhausted quivering wreck from which you never hope to recover. Well. Until you breathlessly hit ‘repeat’ and do it all over again. And possibly again!

Band founder Samuele Santanna’s enthralling solo is the icing on the cake of an album which unapologetically shimmers and delights with mesmerising guitar work. No less remarkable is the towering vocal performance of Gabriele Marconcini. The prelude to the climactic release heralded by the guitar solo begins at 6:03.

A mournful voice, subdued, simmering with emptiness, bewilderment, piteously cries from a heart of desolation, pleading “set me free”. A fermenting dark poignancy speaks of passion lost, anguish and pain, all the while building a crescendo of hopeless yet ferocious pleading, “believe me”, a sustained and exhausting note in full cry, giving everything, reserving nothing, exhausting and extinguishing itself in the very effort of it all. Two sharp, staccato coupled drum beats brings us to the doorway of the moment.

But even here, the story isn’t complete. The preceding transition itself is similarly striking. Beginning at 4:17, we encounter a delightful passage of light spirited funk/fusion. Fabrizio Trinci’s fingers nimbly dance across the keyboards whilst Marco Geri’s bass surges with a bubbling momentum and Francesco Carnesecchi has a lot of fun with the cymbals and a jazz vibe beat. It’s a magical moment of almost relief.

But then, just when our guard is down, at 5:14 Santanna launches a first guitar solo, blistering in frenetic pace, technically exemplary, but at one with a playful, almost frivolous frenzy which has been building in tandem with the energy and strength of the keyboards and bass. The transition is a joyful rapture which paints a beautiful contrast with what is to follow.

The song simply radiates the magic which courses through this enchanting album, surging and swelling with music which grows, flourishes and evolves even as you listen. The songs, both individually and collectively, sparkle with an enticing elegance and alluring finesse which is always on the move, always travelling, always building fresh musical vistas to enjoy and explore.

Colorbox is a 13-minute epic seductively layered with arresting shifts, upheavals and finely structured transformations. Solo keyboards weave a recurring pattern in the form of a lullaby, picked up and repeated by guitar variations, feverish drums asserting themselves and hurtling to a sudden moment of arrest before tranquillity reigns supreme. Listen for the fluid progression of ever-shifting textures as differing instrumental and vocal combinations morph and dance together.

Approaching the Chaos changes things up again; grittier, unforgiving, keyboards and bass creating an ominous atmosphere before a discordant cacophony lets loose, but only as a segue to a rumbling, disconcerting passage where the drums and, more noticeably, the cymbal work glistens in the brooding darkness. A glorious energy envelops the track, unyielding, relentless but a momentum born of changing combinations and emphases.

The opulence of the recording brings a precision, depth and clarity to the soundstage which enhances and brilliantly captures the very heart of the music. This stylish and ambitious album reverberates with creativity, exudes an abundance of inventive imagination and, more than anything else, demonstrates a warm devotion to the craft of song writing which is a joy to behold.

It doesn’t come quickly. It doesn’t come easily. But I guarantee that if you spend time with this recording, it will repay you time and time again with captivating musical adventures and sonic delights to keep you happily coming back for more. And, my goodness, *that* guitar solo. Just one more time, then…