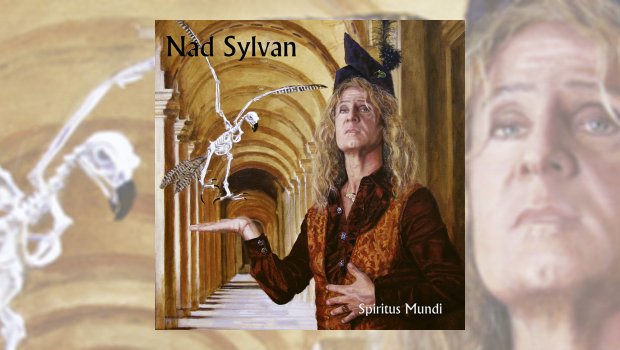 In the real world, most good things come to an end. Fortunately, many of those good things are replaced by better things, or at least as good as they were previously. A couple of years back, Nad Sylvan released the third and final release in his ‘vampirate’ trilogy and so we were forewarned of the end of something that I always thought was really rather good. So what next?

For those of you wondering who Nad Sylvan is, over the last 10 years or so he has created a niche position as the lead singer for Steve Hackett’s Genesis Revisited live concerts. Love him or hate him (and I happen to truly love his contribution to Steve’s faithful reproduction of those beautiful ’70s Genesis classics), Nad Sylvan has quite a musical gift in his own right. His vampirate trilogy, consisting of Courting the Widow, The Bride Said No and The Regal Bastard, had some progressive gems at their heart and I really do recommend their investigation if you have not done so yet.

And so, I awaited to see what Nad would do next with some trepidation… were we going to see more of the good things he had already produced, or was he going to head off in a new direction, or reinvent himself with a new concept? I’m pleased to say it’s quite a lot of both. With Spiritus Mundi (literally, ‘The Spirit of the World’), Nad shies away from some of the more bombastic progressive rock tunes and concentrates on more tuneful and pastoral numbers, but with a consistent theme, that of the poems of WB Yeats. And it did not take too long for me to conclude that this album, whilst different, is quite possibly better than his progressive vampirate story telling. Of course, this concept means that the lyrical element of the album has already been conceived; some might think of that as cheating somewhat. I think not… it’s all about interpreting those poems in a musical setting and Nad, along with his musician colleagues, has pulled it off. This album has great melodies such that (on the one hand) it can be playing in the background, but (on the other hand) the lyrics, or poems, force you back to concentrate on each in turn.

He has had helped as this album is a collaboration with an American songwriter Andrew Laitres, and I am left wondering whether he should have been given more credit…? As I understand it, Laitres had previously composed some music and invited Sylvan to sing vocals, and one thing led to another. Maybe this was just the opportunity that Laitres was looking for, given Sylvan’s connections in the progressive rock arena? Indeed, is this the history of when Sylvan was looking for his own big break all those years ago repeating itself? Whatever, both Nad Sylvan and Andrew Laitres can be justifiably proud of what they have produced together. In addition, there are some guest appearances by the great and the good, including Tony Levin, Jonas Reingold, and none other than Steve Hackett himself, amongst others. This album promises to be very interesting indeed.

Given the Covid-19 restrictions suffered in the past year or so, much of the compositional aspects have been developed through file sharing across the Atlantic between Laitres and Sylvan. We have seen the world adapt to virtual screen-based meetings but I’ve always thought there is a lack of personal interaction with this methodology, something that is essential to get the best out of people; thankfully, Nad and Andrew have found a way to cut through this limitation as all the songs have a great feeling and consistency about them.

There is definitely an Irish lilt, perhaps to be expected given the Yeats connection. It seems to me that, as the words came first and the intent was to set music to them, the music would always have a natural synergy with the Irish roots. And that has been Sylvan and Laitres’ main effort. Indeed, Sylvan himself says: “I worked very hard on the vocals on this one. I would link bits together I thought really worked and then I would go back to them and do another take on a word that could be more emphasised. I was even more meticulous with the vocals this time, down to the smallest breath due to the nature of the music.” The beauty of this album is that it is definitely more acoustic and folky than Sylvan’s prog-rock phase; there are orchestral passages and delicate use of strings and wind instruments, and occasionally we hear Nad’s vocals with no musical accompaniment. All elements have their place.

The album starts with the longest track, The Second Coming. Quite a brave move, but it really sets the scene for the whole album. Cleverly selected by Sylvan, Yeats wrote this poem in the aftermath of his pregnant wife very nearly succumbing to the deadly 1918/1919 flu pandemic, so the timing is relevant; and I’m left wondering whether this poem and track is indicative of the new direction that Sylvan is looking to take. Is this his second coming? It starts with something quite ethereal, and in many ways it is a gentle reminder of his previous work. Acoustic guitars take centre stage with Nad’s signature tone and very forward vocals before settling into a steady rhythm. There is some lovely orchestration, reminding me of Edison’s Children. Sailing to Byzantium tells the story of a metaphorical journey, a man pursuing his own vision of eternal life as well as his conception of paradise. Sylvan and Laitres’ take on it provides great depth to the song, particularly in the vocals, with an increasing tempo as the song develops and shifts between piano and guitar work.

I could hear distinct elements of Cat Stevens throughout this album, particularly on the beautiful Cap and Bells, birds tweeting as solitary vocals lead into tender acoustic guitars and the rhythm section taking its place about halfway through. By contrast, we move seamlessly into The Realists, a darker composition, with Laitres on lead vocals in the first half and a definite trait of Steve Hackett’s acoustic works. The Stolen Child is a steady and catchy number, selected as a single and accompanied by a very endearing video that fits the fairy tale Irish mythology verse perfectly.

To An Isle In The Water has a very Anthony Phillips feel about it. Its pagan ritualistic theme makes it perhaps the most sombre track on the album. It has a lovely fade towards the end before a heart-warming reprise with Chinese flute to close the track. The Hawk has also been released as a single with video, and is the most upbeat and feel-good track on the album. Critics of Yeats’ work identified that he wrote this poem using the hawk as a symbol of the soul; Yeats’ father went on to say that the soul was like “a musical instrument so strung that if we touch a string all the strings murmur faintly.” One cannot but feel uplifted by this track and Nad and Andrew have beautifully captured the sentiments of Yeats’ poem and his father’s views.

The Witch and the Mermaid, the penultimate track of the Yeats concept and the shortest track, is another beautiful song with a Cat Stevens feel topped with pastoral flute, leading us into the final track, The Fisherman, a perfect closer. There’s a repetitive beat but it succeeds in holding ones attention throughout. Yeats wrote this poem to illustrate the ideal man as ‘simple and wise’ and one who lives with nature but has a strong affinity with the arts. The Fisherman was his symbol of that ideal man. I’ve said in previous reviews that the skill of a musician or band is to close an album in such a way to leave the listener fulfilled and wanting to flip the album to the start again. The Fisherman is a carefully crafted track which gives us a bit of everything showcased throughout the album, including vocals by both Sylvan and Laitres, perfectly placed to achieve just that.

There are a couple of bonus tracks on the CD: You’ve Got To Find A Way was the first single and is a composition entirely by Nad Sylvan. It is a pleasing addition to the album, but it does not quite fit the overall concept. It’s a bit syrupy, but I guess that’s the nature of love songs. And finally, To A Child Dancing in the Wind, a Yeats poem about the innocence of youth, featuring Steve Hackett. This most definitely does fit with the concept. For those with the CD, hold out after the apparent end of this track; hidden away is a demo of The Hawk. But who is this singing? If it’s Andrew Laitres, he should certainly get more credit…

I’ve listened to this very accomplished album many times over the past month. Whilst it is a collaboration of ideas, based on the great work of WB Yeats, it has been supremely successful in matching the right music to those poems and Sylvan’s unique vocal timbre fits the concept perfectly. I find myself going back to it more than my previous favourites in Nad’s discography. I’m not the only one, it would appear. Nad Sylvan says: “Anyone that has heard it just loves it. They think that this is my best album and I tend to agree.” Agreement all round then…