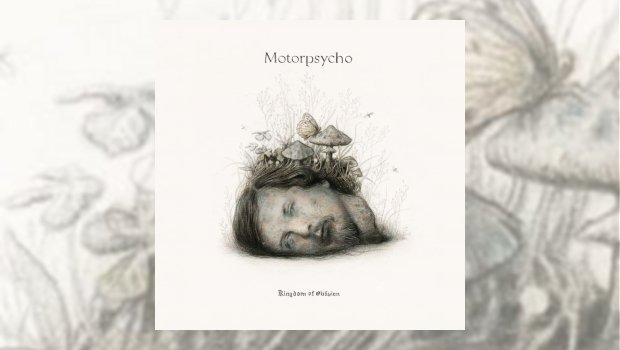 After their burst of three superb albums which made up “The Gullvåg Trilogy”, including their masterpiece The All is One (my personal album of the year 2020), you could forgive the band for taking a well-earned break and rest on their laurels. But no, not these guys, here they give us a new album, Kingdom of Oblivion, the bulk of which was recorded in France before the pandemic. It has been expanded, added too, tweaked and finished during the last year and features guest guitarist Reine Fiske, who joins the band to lend his talents to the wonderful riffs contained here.

Their initial idea was to collect songs which contained big riffs, and put them all together on a hard rock-style album, but in the finest Motorpsycho tradition, that idea developed as they introduced folkish touches to give greater contrast to the sound, which works so well. This release is pretty much full-on and heavy, they continue to take their influences and seamlessly integrate them into the Motorpsycho sound that we all know and love.

The album could be classed as a double, due to its running time of seventy minutes, but the twelve tracks fly by, and such is the quality it does not seem to be overly long. There are four shortish tracks around two to three-and-a-half minutes, these have the most folkish influence, the other eight tracks range from five to nearly eleven minutes. The album was recorded by Peter Deimel at Black Box Studio in France and the band themselves at Kommun’ Trondheim, Norway. It was mixed by Andrew Scheps and the production was handled by Bent Sæther. The artwork was created by Sverre Malling from his Adieu to Old England series, and very striking it is too.

Things kick off with The Waning, Pt 1 & 2, a thundering rolling bass followed by the rest of the band hits you straight from the off with a clear signal that this is going to be a heavier affair. No let up for the title track, there is a Black Sabbath influence to the riff here, but this is pure Motorpsycho and no copy, a track of pure class. This opening salvo finishes with one of the shorter songs, the lovely Lady May, a beautifully played acoustic track with folky touches, elements of CSN&Y and the interlocking guitars of Wishbone Ash, but again noticeably Motorpsycho. This is what these guys appear to be able to do so effortlessly and well.
The power amped back up, BANG, we’re back with The United Debased, which contains some great guitar soloing before moving into heavy Sabbath-like riffing half-way through, followed by a slow and sinister section before the rush to the end. Then we get a surprise cover of Hawkwind’s The Watcher, from Doremi Fasol Latido, written by Ian ‘Lemmy’ Kilminster, and a wonderful version it is too. Dreamkiller starts with a folkish refrain, and you believe that is what you are going to get, but then all change for a heavier, almost atmospheric direction, slowly ramping up towards the conclusion, which suddenly returns to the acoustic feel of the start.

Now if you are going to listen on vinyl, this is the end of the first LP, and on this subject I want to say more. I have purchased a vinyl copy of the album and have compared it against the review download I have, and the difference in sound and mixing is so noticeable. The vinyl appears, to my old ears, to offer more separation and clarity to the instruments, making full use of the stereo field. Again, I know that this all comes down to personal preference for whichever format suits, but for me its vinyl all the way, certainly for this release.

Next up is the acoustic Atet, a lovely song which leads us into the next heavy assault from At Empires End and The Hunt, and there is a lot to enjoy here, heavy riffs, interlocking guitars and the excellent rhythm section. The final trio of songs, which would make up side four of the vinyl, are placed together well. The short but almost delicate acoustic After the Fair gives way to the longest track, The Transmutation of Cosmoctopus Lurker (prizes here for the weirdest song title of the year). This ten minute plus track begins with a thunderous bass as the song becomes a tour de force of power and ideas with multi-layered enjoyment. What makes this song so interesting is their ability to control the ebb and flow, seamlessly changing direction and pace but always maintaining focus. The rhythm section puts in a powerful performance, driving and holding the song together, the pace continually picking up with interlocking guitars and a frantic guitar solo thrown into the mix. Then the ten minutes has gone and we get the final track, the wonderfully thoughtful Cormorant. The placing of these two quieter tracks either side of the epic longer one is a stroke of genius clearly highlighting what this band are about.

Hopefully I’m not sounding too repetitive but Motorpsycho have for me pulled off another album of the year. This is a band whose creative focus is spot on, knowing what sound they want to create with each evolving release. Kingdom of Oblivion is an album you need to hear, if you like heavy riffs and folk-like touches mixed with some very skilful playing and great songwriting, this could be the one for you. Available on CD, download, and that Vinyl stuff I have been banging on about.

Motorpsycho – The All is One →