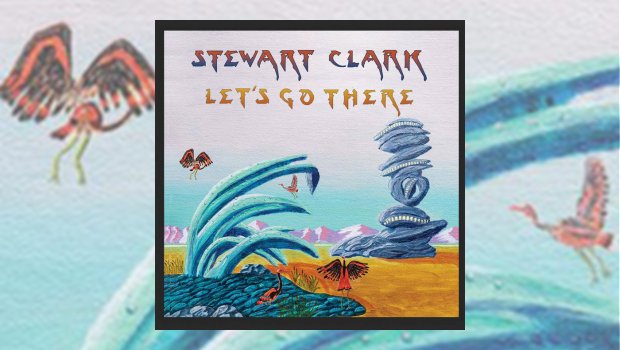 We’ve all bought albums for the cover, only to find that the cover is great but the contents are not. Fortunately, that is not the case with Stewart Clark’s Let’s Go There. It’s a 36-minute gem, every track fits into that Goldilocks ‘just right’ zone, showing Mr Clark’s incredible talent.

With a Roger Dean-like landscape on a nice gatefold sleeve (where the CD is quite a pig to get out), the inner sleeve photo is bucolic, featuring lyrics just big enough to read. It’s really nice, even before putting light onto the CD surface.

Almost 20/20 opens the bill of fayre, a track relating to Covid-19, with dialogue and facts and figures from the news media. Musically, the first few bars remind me of IQ and The Road of Bones, the tones used are similar. All fear of prog by numbers is dispelled as we move on. There are influences, but not copies, as Stewart establishes his own sound to a fair extent. The swirling oboe, courtesy of Alison Brown, reminds me of Acoustic Alchemy, but with change again, nicely combining electronica and acoustic instruments.

The title track is more poppy, Stewart’s voice not dissimilar to that of Bruce Soord or Riverside’s Mariusz Duda. The guitar work is very sweet on this track, but not sickly and sugary. It’s rather lovely, feeling hopeful, so I hope this is a song of hope.

Dave Bandana of Bardic Depths appears on A Tree Has Fallen, which is eighties without being eighties. You will remember these tunes after the album has ended, and in a world of the disposable that is a big plus. Abel Ganz and Riverside spring to mind by way of comparison, but blow that in its simplicity. It’s a really beautiful tune. I don’t favour the ‘all toys required’ approach, and this is a clear example of less being so much more.

No need to frightened by the change of pace with I’m Scared of Music, a short but powerful track before the pace changes again. The Empty Page is not a folk song but has a folk rhythm to the lyrics, taking my mind to the sadly missing lockdown-induced Fairport Convention winter tour. When songs have this rhythmic quality they are very hard to forget. I’m halfway through an album I want to continue longer than its 36 minutes. I used Fairport as an example, but the rhythm I felt was that of Steeleye Span’s collaboration with the late Sir Terry Pratchett, and the song Fair Summer Maiden.

How Much Fear? None, there’s a Pineapple Thief influence here. Often with self-produced material there’s a feel of the artist not knowing when to stop. Stewart and co-producer John Hannon have indeed got this just right (but which of the three bears they represent I will not guess). When I Tell You I Care is just wonderfully crafted, and I hope successful enough that Mr Clark will spend more time in isolation crafting much more. Maybe if it doesn’t extend them beyond their welcome, some longer tunes? Different sources again, still folk-like but there’s a touch of Seth Lakeman about it.

Almost Got Away With It. You have Stewart, with style and flair and a lot of panache. There are bits of every track on this album that fool you by changing direction, but unlike some, each element feels integral to the song that it inhabits; here we have the cream tea, dollops of Jethro Tull on a scone, with cream then jam. All done proper.

Would I buy a used car from Stewart Clark? Which one? The one over there, supported on bricks? Oh yes please, and would he like the shirt from my back too?

Final Question: Who is Stewart Clark? Can I phone a friend?

PS. You did get away with it!

[You can read Tony’s interview with Stewart Clark HERE.] 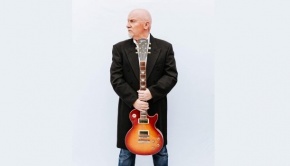