I have to admit that prior to clapping ears on this recent release I was unfamiliar with the name Kevin Kastning. Quite how I’d not come across such a talented and progressive guitarist before is a mystery, but I’m glad to have righted that wrong. When I say he’s a progressive guitarist, I mean that in the sense of pushing the boundaries of what the instrument can achieve, and the sound palette available. The sounds on this album are extraordinary, and quite unlike anything I’ve heard before. The music seems to have no genre to define it, and possesses an ethnicity which is hard to pin down. It could, I suppose, be classed as World Music, but is it this world one wonders?

When we dig beneath the music, and explore the way in which this recording and the instruments involved came together, the album seems more unlikely still. For a start, the music was recorded in a single afternoon. Not a day, an afternoon. It was recorded live with no overdubs. Not only that, but this extraordinary trio recorded another album’s worth of material that same afternoon, music yet to see the light of day. Why didn’t they start in the morning and give themselves a bit more time? They did, and recorded another album, Kismaros, released in 2019. The fact that Kastning and Szabó had only finished their European tour the day before is a minor point! 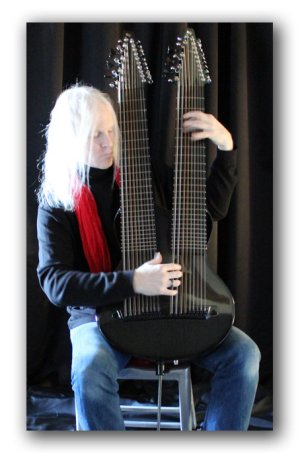 So what makes this set sound so special? It’s a combination of factors. The concert hall they recorded in, the Kismarosi Muvelodesi Haz Concert Hall in Kismaros, Hungary, has amazing acoustics, giving the music a beautiful other-worldly ambience. There is no audience, just the trio and the recording engineer (and guitarist in his own right), Roland Heidrich, who clearly knows how to set up the musicians to capture the music perfectly.

Alongside Kastning, Sandor Szabó plays baritone electric guitar (not his usual instrument, as he tends to play acoustic guitars generally), and his plaintive phrasing and colour brings Kastning’s compositions to life. Adding organic texture and depth is Balázs Major, who provides an assortment of percussive sounds and form, adding further shape to the music. Kastning himself plays an instrument he envisaged some years ago, a twin necked 30-string Contra-Alto guitar. He designed the theoretical possibility of such an instrument, but it wasn’t until he hooked up with Alistair Hay at Emerald Guitars in Ireland that it eventually became a reality. The full story of this beast’s creation is on Kastning’s website, but suffice to say, it is a miracle of guitar building and vision. The sounds possible from an 18-string contra combined with a 12-string alto guitar are hugely varied. At times the sounds are more akin to a harpsichord than a guitar, the similarity is remarkable.

The six tracks, or “occurrences”, are deceptively intricate and detailed. To what degree they are composed, as opposed to improvised, is unclear to me, but they seem to evolve naturally and elegantly from tentative brush strokes into fully-formed works of art. It is like some strange hibernating animal being coaxed back to life by the breath of the wind and the warmth of the sun. Szabó provides baritone guitar sounds which could have been born in distant space, or emanated from the deepest ocean trench, while Major taps and scrapes, pulses and beats like a heart, adding to the impression that this music is truly alive. The 30-string often sounds like more than one instrument, so the concept of the trio is stretched beyond its usual scope, and the abstract nature of the music adds a further layer of mystery. Kastning’s vision and experimentation knows no bounds, as he lovingly coaxes a waterfall of melodic explorations from the instrument he created. The overall sum of these parts is a listening experience quite out of the ordinary, and extremely adventurous. I see that ‘ethereal’ is defined as ‘extremely delicate and light in a way that seems not to be of this world’, and so I have to conclude that this album (or series of albums) are well named, and I have no hesitation in recommending this album as a truly rewarding listening experience.