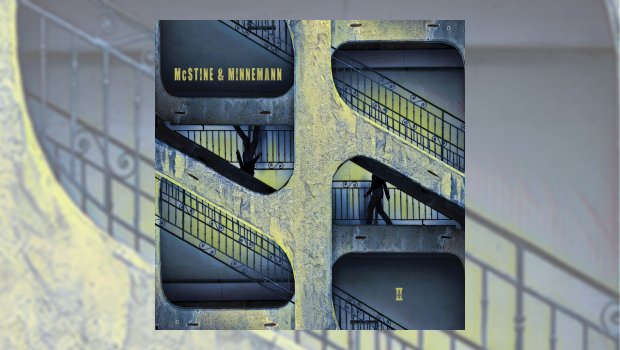 Hot on the heels of McStine and Minnemann’s debut album – less than six months later – Randy and Marco have only gone and popped out another one. If there is any kind of positive to be had with Covid keeping musicians off the road, it has resulted in a lot of recording to fill the void which wouldn’t otherwise have happened.

This one follows on from the first in style, but is an even more assured beast. Keeping to the punchy yet scattershot appeal of the debut, it features exquisitely crafted songs delivered with all manner of U-turns and extraneous bells and whistles. Only two of the sixteen tracks breach the 5-minute mark, and three don’t even reach a minute in a frenetic three-quarters of an hour. What we have is a swiftly moving smorgasbord of eclectic delights, deliciously accessible yet successfully scratching the need for instrumental firepower, as the duo deliver in spades; top draw playing but without any need for showing off. It’s fast, furious, odd yet beguiling, and everything is in full service of the material.

The musicianship? Yep, it’s as good as you’re going to expect, and they even manage to hook in Rush’s Alex Lifeson to add some weird ‘Howling ambient guitar’ to the closing mini-epic The Horse is Dead. Strange sounds poke around the edges of the sublime performances. Randy’s voice is just fabulous and his playing spot on, Minnemann’s technique and vitality exemplary, but that’s really not the point as it’s the beautiful madness of the material that is the true star, the pair multi-instrumentally supporting each other to perfection in a toe-tapping package rammed to the rafters with melody.

It’s an energetic explosion of the unexpected integrated into classy off-the-wall songs – a democratic eight from each of the guys, no co-writes, but all blend together beautifully. The styles change and there’s no signature sound but it isn’t jarring. It’s fun, bizarre yet very easy on the ear and wholly satisfying, dextrous without being taxing.

These are songs, often strangely embellished songs, but bloody good songs, and it may come as a surprise that there’s only one instrumental, although the guys get tons of space to stretch themselves throughout. Various eras of Frank Zappa are apparent, along with the melodic sensibilities of the likes of Queen or 10CC. There’s jazzy bits, noir-y bits, funny bits, jaw-droppingly amazing bits, toe-tapping sing-a-longy bits, atmospheric ’60s pop things plus odes to the electric chair and dumbasses in general. I mean, fair play! The archly deprecating Girls at the Gig is a grungy pisstake on the “sea of men” usually to be found at the guys’ gigs, which leads to a tongue-in-cheek lack of groupie action – “I’ve got my record collection / And a lot of time for introspection”. Arf!

And it all flies by. There’s barely time to take a breath in an exhilarating ride. This project is in serious danger of becoming an addiction – next fix please!

Levin Minnemann Rudess – From The Law Offices Of →