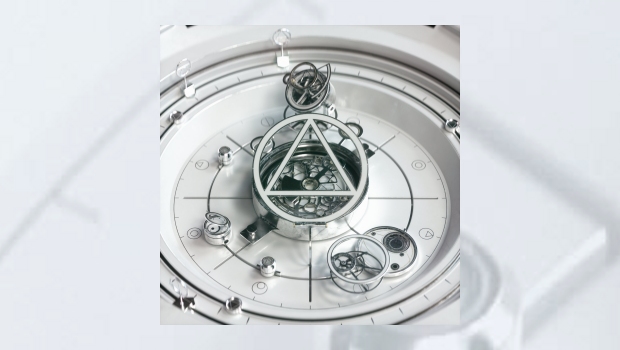 Pyramid Theorem – Beyond The Exosphere

I’m indebted to Cydemind for introducing me to Pyramid Theorem. I’d never heard of the latter, until the former shared a link to Pyramid Theorem’s latest album to introduce their fans to the band they’d be touring with. My memory puts that on Bastille Day 2017, but that may well be the Mandela effect. Regardless, I was immediately impressed by the just released Element of Surprise, which sounded to me like a wonderful mix of Rush and Extreme, but with a harder and heavier edge. They stood out to me then in a prog metal scene full of Dream Theater clones. While that band did appear to still be an influence, the music of Pyramid Theorem never sounded derivative, the way so many prog metal bands of that ilk do. Quite frankly, most prog metal bores me – but Pyramid Theorem offered something that did indeed have an element of surprise, and was a thoroughly enjoyable and original headbanging romp and stomp.

So, three years down the line, Pyramid Theorem’s third album has been released – Beyond the Exosphere. My first thought, before listening to a note, is to admire the cover art. As much as I liked the music of Element of Surprise, I didn’t like the cover art at all. So, with the cover for Beyond the Exosphere being quite possibly my favourite so far this year, I was worried that maybe the inverse might now hold true, and I’d find the music of this new album less inspiring, especially given, three years down the line, I listen to even less prog metal now than I did back then.

From the first notes, it is clear the Rush influence is still key. The album opens with the epic title track, and it’s introduction clearly evokes long form songs from the ‘70s Rush catalogue, though with an entirely contemporary and metal sheen. The first two minutes make an impressive entrance, before the music kicks back a gear, and then another. Thus begins an incredibly melodic passage. All my worries float away, as it becomes clear that Pyramid Theorem may well be influenced by Dream Theater, but they still remind me more of Rush and Extreme. In fact, the way the various parts of the title track are quite distinct is very Rush-like, and it’s very cool, maintaining interest incredibly well.

There are ambient moments and some impressive solos. I loved the drums at the very beginning of the track, but the solo is incredible. A lot of people are not fans of drum solos, and even someone like me who loves drums has to admit that some can be rather boring – but I can’t believe anyone could listen to this one and not be impressed. A key to this, I guess, is the length. Pyramid Theorem seems to instinctively know just what is the right length. No passage of the song is too short or too long. The whole thing just works marvellously. Around halfway through the song is possibly my favourite section, which mines a similarly groovy and almost jazzy vibe to that of Dutch band Sky Architect (I’m fairly sure Pyramid Theorem will not be aware of Sky Architect, so this is obviously my inference, rather than any influence).

Honestly, I could make this review just about the title track, so much happens within it. The album is worth it for this one track alone. But that is, of course, a double-edged sword. By putting it first, it does give the remaining tracks some very big shoes to fill. I can’t help but be reminded of Rush again, and their classic album 2112. When I first listened to that album, I was so overwhelmed and enamoured by the title track, I almost ignored the remainder of the album. It took quite a long time before I realised how enjoyable the other tracks were. So is the rest of the album a step down? Well, yes, but that doesn’t mean that the remaining tracks are no good. And I don’t think it really matters. Again, the album is worth it for the title track. The other songs are merely icing on the cake. Given there is definitely more Dream Theater in this release than the previous, another comparison could be to A Change of Seasons. That release is worth buying just for the title track. Not one of the live tracks is as good, but they are still good. Icing on the cake.

Now, I just mentioned there is more Dream Theater in this release, and it is something I have to note because it’s not so much to my liking. The final moments of the title track definitely start to sound a little more Dream Theater influenced, and the following Under Control has a definite Dream Theater vibe. Given that band’s popularity (and please note, I do actually like Dream Theater myself), I suspect that may make this second track a favourite of many listeners, but for me it becomes the least interesting – as I like it more when Pyramid Theorem show the originality and flair they clearly possess. Attention all planets of the Solar Federation. Dream Theater have assumed control. Freedom brings things back on track for me. Still a clear Dream Theater influence, but I really like this track, and I love the vocals. And the bells. The bells! How awesome are they? And some more amazing drums on this track.

Closer to the End has an epic feel to it, if not length. Stabbing keyboard flourishes, choral vocals, and repeated staccato riffs all impose a real sense of drama. The keyboard playing is scorching and keeps up the intensity. If this is Dream Theater, it’s The Astonishing – but as that’s probably my favourite Dream Theater album, that’s fine with me. And as much as I keep mentioning Dream Theater, I need to reiterate that Pyramid Theorem never sound like one of those soulless clones of that band. There’s still so much going on in here, and I’m going to mention Extreme again, as I hear that again. This track doesn’t have any overt funk to it, the way so many other Pyramid Theorem songs do, but it’s still there – hidden underneath the bombast. This is a groovy wee tune, and I completely dig it. If there’s a standout track on Beyond the Exosphere apart from the title track, it’s probably this one.

The album ends with Intonate, closing things out in style – albeit a lot of that style is again very reminiscent of Dream Theater. The drumming towards the end is sublime (yes, I’ve mentioned the drums a lot in this review – I love the drum sounds on this album!). Overall, I really like Beyond the Exosphere, and more so than its predecessor. However, I do have some concerns for the future. Despite my enjoyment, it’s hard not to hear how much more of the Dream Theater sound is creeping into the music of Pyramid Theorem. That’s not necessarily a bad thing, and it may help sell more records, but I rather hope the band tones it down for their next album, as otherwise I fear they may be in danger of becoming another Dream Theater clone. Then again, perhaps Pyramid Theorem have merely used the Dream Theater vibe to unite the album, and give it greater cohesion? Element of Surprise was an eclectic delight with an element of surprise to every song. Beyond the Exosphere may still be somewhat multi-faceted, but it holds together as an album far more. It will definitely be interesting to see where the band goes from here…