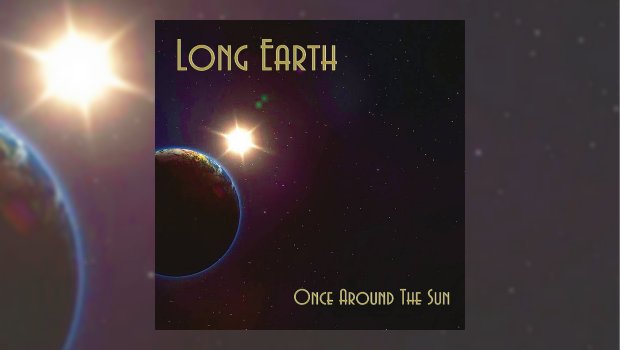 Long Earth – Once Around the Sun

When trying to talk about a piece of music it can be frustrating knowing how, or even where, to start. Occasionally, having spent time with a particular release, you realise it’s perhaps not as good as the initial cursory listen led you to believe. Unpacking the ‘why’ of that sense of disappointment can be difficult. Other time, however, a recording can be so beautifully put together, the beguiling experience it weaves for you then takes time and patience to slowly pick apart, understand and appreciate all the different elements involved.

Many a time I have sat down to start writing about Once Around the Sun, the second studio album from Scottish band Long Earth, only to find myself still twiddling my thumbs hours later and reaching for the play button for ‘just one more listen’ as I try to figure out where to start. It turns out the start – and also the end – is actually the easy bit: it’s bloody brilliant. After that, frankly, there’s not much more that needs to be said – apart from the inadequacy for all those asking: Why? How? You can’t leave it at that. For god’s sake, tell us more!

Mmmm. So where should I begin? Perhaps, maybe, just one more listen!

In the end, the only thing I can do is tell you the journey of my gradual captivation with this seductively magnificent album. You see, the place to start is with the simplest and most natural of reactions: it feels right – it feels good, with an immediacy and presence that only music can. Everything about it resonates, tingles with an embracing, enfolding and organic elegance that effortlessly sweeps you along on a musical journey where you happily lose yourself among the bubbling melodic currents and harmonic eddies.

Unpacking this further, I would draw your attention, first, to the remarkably uncanny and deeply perceptive way it captures and then gently amplifies the shifting moods of the world in which we presently live. Perhaps this is why it feels so right: it is, without question, an album of and for its time. The poignant and at times almost painful lyrical resonance speaks with an all too world-weary wisdom, spiked with penetrating observations born of hard-won and long-suffering personal experience.

Listen, for example, to the touchingly deft nuances and the carefully well-chosen phrases scattered throughout what is my favourite track of the album, My Suit of Armour. The simplicity of the message is underscored by the use of incredibly shrewd turns of phrase. Life is a journey, but some journeys are longer, or more difficult, or more painful than others. We say “goodbye to those who love without condition”; we “bury fallen comrades and wipe our tears away”; “they say that what doesn’t kill you serves to make you stronger, I should be invincible by now”. So “I shed my skin, put on my suit of armour and battle on somehow”.

The arresting poetic force and lyrical finesse across the whole album is enthralling as well as deeply moving. But lyrics cannot exist in a vacuum, so I would draw attention, second, to the diversity and the depth of musical expression which permeates this recording. A sprightly and delightful creativity is at work in forming a musical cradle which never fails to bewitch and beguile.
The masterpiece of the album is the four tracks which together form what might be called the ‘Four Seasons Suite’, standing at around 33 minutes in duration. The genius at work here lies in the comparison it draws in the transition between seasons and the emergence, growth, decline and fall of a relationship. It all happens in the time it takes for the world to go once around the sun.
Superb musicianship translates each of the four stages into a thoroughly engrossing series of musical vignettes that are stunning in the exercise of instrumental virtuosity as well as the richly textured and riveting emotional experience they present. Summer, in particular, is almost perfect in its blend of lyrical poignancy, intense musical expressiveness and insightful performances.

I’ll finish where I started. Once Around the Sun is bloody brilliant. The lyrical and musical charms it offers are irresistible, enticing and certainly provocative. A fabulous second album which deserves hearty and lavish appreciation.